This was, as you may have guessed, a while back. A cold spring day in 1976, if I recall correctly. I was too sick to go to school, and my friend John MacMaster brought me two novels to read while I recuperated. I was already an avid reader, a huge fan of Scholastic books like The Case of the Marble Monster, and Alfred Hitchcock and the Three Investigators. But the books John brought me weren’t like those. They were adult novels and they were unlike anything I’d ever read before. Most of the details of that long ago school semester have long since faded, but I remember those two books vividly: they were Ox by Piers Anthony and Shakespeare’s Planet by Clifford D. Simak.

Piers Anthony, of course, was a fine choice to introduce an eleven-year old to science fiction. But Simak was inspired. If I had the opportunity to introduce young readers to SF and fantasy today, I think I might still choose the novels and stories of Clifford D. Simak. His deceptively simple adventure tales were wrapped up in some of the most imaginative settings — and featured some of the most delightfully quirky characters — of any SF writer of the era.

In the years since, I’ve gotten much more acquainted with the work of Clifford D. Simak. I believe his Hugo Award-winning novelette “The Big Front Yard” may well be the finest science fiction story of the 20th Century — it’s certainly in the running, anyway. His classic City (1952) is probably his most acclaimed work, but Way Station, which won the Hugo Award for Best Novel in 1964, is perhaps best remembered today.

Simak produced a total of 29 novels and 19 short story collections, and even after all these years I’ve read only a fraction of them. He’s the writer I return to when I find myself frustrated, or when other authors disappoint. I returned to him this week, and while my hand hovered over several other enticing choices, including The Werewolf Principle and The Goblin Reservation, ultimately it was Cemetery World that proved irresistible.

Cemetery World was first published in 1973 and it features one of the most intriguing settings I’ve ever come across. Far, far in the future, the planet Earth is a massive, silent cemetery. Nearly destroyed eons ago and now virtually abandoned by the living, it is vast garden of the dead, inhabited only by war machines, mechanical wolves…. and ghosts.

Here’s the inside flap copy on my 1976 hardcover edition.

One of the best-loved stoytellers in science fiction has created a lovely and terrible world 100 centuries in the future — Earth, graveyard to a galaxy. Those who can afford it ship the bones of their dead loved ones back to Mother Earth, man’s ancient birthplace. Ravaged 10,000 years earlier by war, Earth was reclaimed as a planet of landscaping and tombstones.

Now Fletcher Carson, an artist, travels to Earth to create a “composition” — a total art from incorporating music, drama, and dance, as well as the plastic arts. He takes with him his powerful, ancient robot friend Elmer; his “compositor,” an incomprehensibly gifted but barely sentient (in fact, rather stupid) machine for creating art; and Cynthia Lansing, a treasure seeker whose real goal is vastly more important than mere gold and jewels.

This extraordinary troop discovers quickly that they are not welcome — they are hunted by unstoppable wolves of steel and by ghostlike beings called Shades. They are joined by an enigmatic shrouded figure whose feet seem never to touch the ground, whose face seems never quite discernible under his hood, who will identify himself only as “The Census Taker.”

Once again Clifford D. Simak has created a far-future pastoral — a novel of high adventure set in a wild and peaceful landscape recalling earlier times and the simpler life — a novel in the great tradition of his classic, City.

Cemetery World was originally serialized, in a slightly abridged version, in three parts in Analog magazine, starting in November 1972. The cover of the November 1972 issue (above left) is by the brilliant John Schoenherr.

The novel had a great run in print. The first standalone version was the March 1973 hardcover by G. P. Putnam’s Sons, reprinted in 1974 with the same cover in a handsome paperback edition by Berkley Medallion (above middle). That distinctive wraparound art for this version, probably my favorite, was painted by Vincent di Fate, and it beautifully conveys the ruined, abandoned planet Earth.

One of the finest covers artists of the era, Paul Lehr, did the next cover, for the 1976 Berkley Medallion paperback (above right). In my eyes, Paul Lehr usually can do no wrong, but I have to admit this cover, while colorful, doesn’t appeal to me as much as di Fate’s more downbeat vision.

I think the British covers are overall successful, starting with the 1977 Magnum paperback (above left), with art by Chris Moore. In March 1977 the novel was reprinted again (above middle); also with a cover art by Chris Moore. (I’m not sure what’s with that contemporary-looking jet fighter, though… are these scenes even in the book? I’ll guess I’ll find out.)

Cemetery World returned to American shores in May 1983, with a new publisher (DAW) and a new cover artist: Frank Kelly Freas (above right).

There was one more British edition, from Methuen in March 1987 (below left), also with a cover by the versatile Chris Moore. It appeared in paperback one last time in June 1993, in a new edition from Carroll & Graf (below right), part of their ambitious Masters of Science Fiction line. Sadly, the cover artist for this version is uncredited. 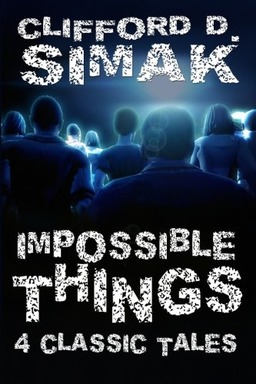 I have almost all of the American paperback editions, and I have to admit I delight in how different they all are — not just the cover art, but the book blurbs. I’d love to get my hands on the British editions as well… but perhaps that’s just being greedy.

Clifford D. Simak is ripe for a comprehensive short story collection, as recently — and very successfully — done with Zelazny, Leinster, Poul Anderson, and several others. However, negotiating for the rights with his heirs for his fiction catalog has apparently been challenging.

I’d especially like to see a complete collection of his pulp stories, which were wonderful, and which are now virtually all out of print. Darkside Press issued the first two volumes in a projected series reprinting his pulp fiction, Eternity Lost (2005) and Physician to the Universe (2006), before closing up shop.

More recently, Wildside Press has begun issuing slender volumes collecting four tales each, including Impossible Things: Four Classic Tales (August 17, 2010) and Hellhounds of the Cosmos and Other Tales from the Fourth Dimension (January 29, 2011).

A friend of mine who has collected everything Simak for years stopped by to see me and chat for a few hours the end of this past May. He had come to Kansas City to attend ConQuest.

I showed him the original cassette tape of my 1975 Simak interview and he more or less freaked. He took it home with him, enhanced the quality, put it on disk, and mailed everything back to me.

At the end of the Simak interview (which I posted online in May of 2011 for the first time from its original 1975 appearance in Tangent), my friend and I included the _audio_ of the Simak interview, and he wrote a nice essay on his love for Cliff and all things Simakian. So if you’d like to actually listen to Cliff’s voice as we did that long-ago interview, please just click on the following link and scroll to the bottom of the print interview. It brings back a lot of nice memories to me.

Simak has sadly faded from SF’s collective consciousness; his name will almost certainly draw a “Who?” from younger fans, and that’s a pity. He could do “Gosh-Wow” stuff with the best of them (Ring Around the Sun is practically a catalogue of beloved pulp SF devices), but it’s the gentle, deep humanism at the heart of his best work that makes him such a wonderful writer. Has anyone ever produced a wiser, more moving SF novel than Way Station? If someone has, I’d sure like to read it.

I’m keyed up: very soon, I’m going to get the answer to a question that we weren’t able to answer over at Science Fiction and Fantasy Chronicles Forums.

How is this fine author’s last name pronounced?

So: how did he pronounce it?

Or an even better example of the shirt “i” in Cliff’s name would be “simulation.” “Sim”-ak as in simulation.

Thank you, D. Truesdale. I will spread the word about the correct pronunciation.

I know it’s the nature of the pop culture beast, but the thought that Simaks’ gentle, deeply human (and humane) books are not known to more sff fans is disappointing. The first time I read “Desertion” I knew sci-fi could be much more than rockets and ray guns.

Here’s a nice page with some cool Simak stuff…and you can hear how his name is pronounced.

“but perhaps that’s just being greedy.”

Sounds like being reasonable to me. My wife would disagree, but what does she know? (on this point, only on this point)

I read a great deal of Simak when I was a teenager and loved almost all of it including CEMETERY WORLD. I really need to go back and read what I missed and reread my favorites.

You’re right, John, about the need for a comprehensive collection of his short fiction. I would be willing to pay big $$ for that. (Stephen Haffner, are you listening?)

[…] in September I wrote a Vintage Treasures article about Clifford D. Simak’s Cemetery World. Simak is one of my favorite authors, and much of his work — especially his early pulp […]