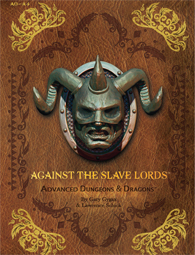 I think the release of Against the Slave Lords is cause for celebration.

Against the Slave Lords is a hardcover collection of four interconnected Advanced Dungeons & Dragons adventure modules, the A1 – A4 series Scourge of the Slave Lords, originally published in 1980 and 1981. It includes new forewords by the four surviving designers. Lawrence Schick, for example, relates how his inspiration came from fellow author and dungeon master Harold Johnson:

In his campaign one night, Harold had our characters get captured, whereupon he took away all our stuff and threw us in a dungeon. The challenge: escape without relying on all our carefully hoarded adventuring gear. Were our characters people with skills and brains, or were they really just lists of equipment?

It also includes the maps and all of the original black-and-white interior art. Most intriguing of all, there’s also a brand new fifth adventure that sets the stage for the entire series, published here for the first time. Danger at Darkshelf Quarry is designed for low-level players (levels 1-3).

Why celebrate? It signals that publishers Wizards of the Coast are serious about bringing the canonical works of first edition D&D back into print. I was plenty excited at their last premium hardcover reprint, Dungeons of Dread, as it collected some of the most famous adventures written by AD&D‘s creator, Gary Gygax — including Tomb of Horrors and The Lost Caverns of Tsojcanth (still one of my favorite adventure modules of all time) — all of which were long out of print and hard to find. 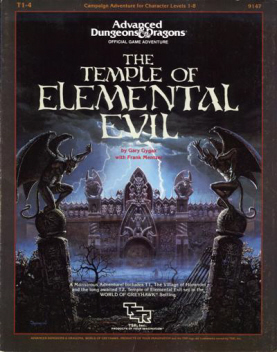 Wizards has expanded the premium reprint series well beyond the scope of their original announcement last August. They have already reprinted all four of the original AD&D rulebooks — including Unearthed Arcana — and in May moved on to Second Edition (examined in detail by Andrew Zimmerman Jones here.)

I’m glad to see Section Edition back in print. But my real hope is that Wizards will continue to republish Gygax’s most famous adventures — including Against the Giants (which first introduced the Drow), Descent Into the Depths of the Earth, and most especially The Temple of Elemental Evil (which Matthew David Surridge examined in detail here), perhaps the finest RPG adventure module ever written.

Against the Giants, Descent Into the Depths of the Earth, and The Temple of Elemental Evil are all long out of print — and all command exorbitant prices on the collector’s market (Temple alone routinely runs $60-$80 for copies in decent condition on eBay) and are out of reach of all but the most dedicated collectors.

Last year, Wizards published a Fourth Edition update of The Temple of Hommlet, the first portion of the Temple, but that was in a limited release as part of their DM Rewards program — and copies of that are already hard to find.

A proper reprint of those classic adventures would bring them back into the hands of gamers — especially OSR players — for the first time in decades.

Until that happy day, I’m very pleased to see Against the Slave Lords available again. It’s a fine set of classic adventures, and I urge you to check it out. 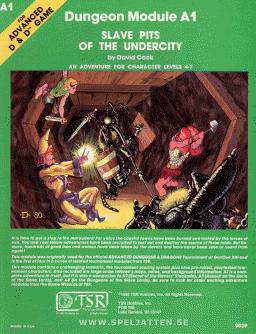 A1: Slave Pits of the Undercity (written by David Cook, originally a 24-page booklet, 1980): It is time to put a stop to the marauders! For years the coastal towns have been burned and looted by the forces of evil. You and your fellow adventurers have been recruited to root out and destroy the source of these raids—as hundreds of good men and women have been taken by the slavers and have never been seen or heard from again!

A2: Secret of the Slavers Stockade: (Harold Johnson and Tom Moldvay, originally 32 pages, 1981) The battle against the slavers continues! You and your fellow adventurers have defeated the slavers of Highport, but you have learned of the existence of another slaver stronghold, and you have decided to continue the attack. But beware! Only the most fearless of adventurers could challenge the slavers on their own ground, and live to tell of it!

A3: Assault on the Aerie of the Slave Lords: (Allen Hammack, 32 pages, 1981) Into the Drachengrab Mountains! Hot on the trail of the marauding slavers, you and your fellow adventurers plunge deep into hostile hills. Spurred on by your past success, you now seek the heart of the slaver conspiracy. But hurry! You must move quickly before the slavers recover from your previous forays and attack!

Against the Slave Lords was published by Wizards of the Coast on June 18. It is 192 pages in hardcover, priced at $49.95. There is no digital edition.

See all of our recent New Treasures here

Quick question: Is this actually reprinting the original four separate modules (A1, A2, A3 and A4) as opposed to the perfect-bound Scourge of the Slavelords collection they released later (when they tied Elemental Evil, Slavelords and Giants/Descent into a single long campaign)?

That’s a dang good question! I’ll have to dig out my copy of Scourge of the Slavelords and compare them.

Were there a lot of changes in the SCOURGE reprint?

Joe H: It is a reprint of the original four modules. The only thing I found that Scourge of the Slavelords added to the path of quality was a very nice Easley cover. However, the drawback I see with this compilation, although beautiful, it lacks the ability of have maps on the removable covers and also is much more difficult to show players sample artwork. I really wish it had a removable section or even a CD that you could download the maps and print them if needed.

Sorry — I’m not certain; I never had any of those combined reprints. From poking around on the Internet, it looks like they bumped up the level (made it for 7-11) and maybe put in a bit more setting info or connective tissue? Also the maps were moved into a separate booklet.

And yeah, that was a nice Easley cover. 🙂

Great memories of the SL series, but I’m pretty sure they wouldn’t hold up when compared to what’s on the printed page. I’ll stick with my memories on this one.

Yes, thanks, Scott! Good to know. And I agree re: removable maps or a CD or even something on their website.

It’s amazing how minimalistic those old modules are — the original G1 (Steading of the Hill Giant King) was 8 pages long including a title page. And those light blue maps inside the covers (to prevent photocopying) still give me the biggest nostalgia rush.

> I’ll stick with my memories on this one.

I know what you mean. Most of these adventures — especially the Giant Series, and Descent into the Earth — figure prominently in my early memories of D&D.

But I was the DM of all of them, so I still get a nostalgic thrill reading through them, and remembering how I planned each of the encounters. I was around 17 at the time.

I also hope to run my child through the Giant series (they’re currently in the middle of The Temple of Hommlet, deep in the dungeons of the moathouse). So far, they’re having a blast.

I know! In my mind G1 looms as a massive, epic adventure… and yet it’s a marvel of tight description and non-stop action. Incredible.