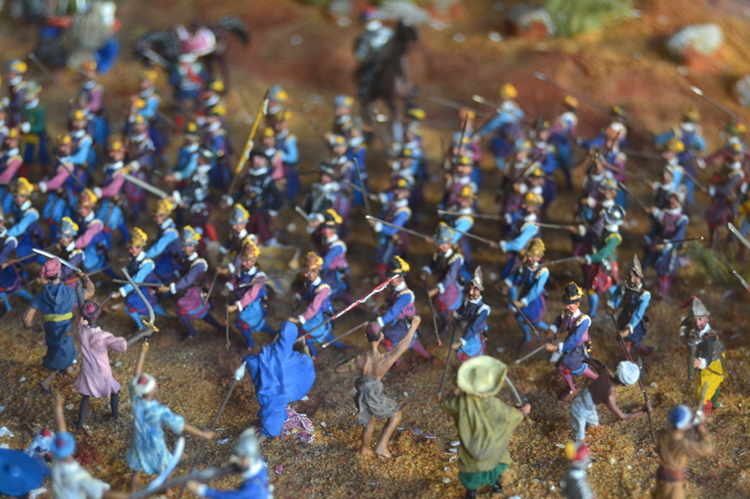 The army was poorly organized and equipped, with the Portuguese nobles bringing along large numbers of servants and fine silverware when they should have been stocking up on weaponry. The best leader among them was the English adventurer Thomas Stukeley, leading 600 Italians who the Pope had originally intended for an invasion of Ireland. The army had 36 cannons, but an insufficient number of arquebuses, meaning the pikemen would be poorly supported. The various nationalities constantly squabbled and Sebastian lacked an overall plan.

The army of Abd Al-Malik, on the other hand, was ready to fight. The Sultan had spent time in the Ottoman army and had learned much. It’s unclear how large his army was. Conservative estimates put it at 36,000 cavalry, 7,500 arquebusiers, a huge mob of indifferently equipped infantry, and 34 cannons.

The Portuguese army landed at the port of Arzila and took more than two weeks to get organized, consuming most of their supplies in the process. Their objective was the port of Larache, but first Sebastian wanted to move inland and take the fortress of Ksar el-Kebir, to cut Larache off from reinforcement. They set out on July 29, 1578. The march inland was an endurance test in the brutal late July sun. Supplies ran out and soon the men suffered from thirst and hunger. Most of the artillery was abandoned on the way.

Abd Al-Malik had problems of his own. He’d drunk some spoiled milk and was violently ill. Nevertheless, he led his men to fight the invaders.

The armies met on August 4 on an open plain before Ksar el-Kebir. Abd Al-Malik used his superior numbers to form a wide crescent with his cavalry in order to envelop the Portuguese flanks. Sebastian formed his army into a large square with the camp followers and baggage in the rear center, and moved into the waiting arms of the Moroccans. Irregularity in the terrain kept Abd Al-Malik’s cavalry from view until too late. In an instant, the Portuguese were outflanked to the left and right. 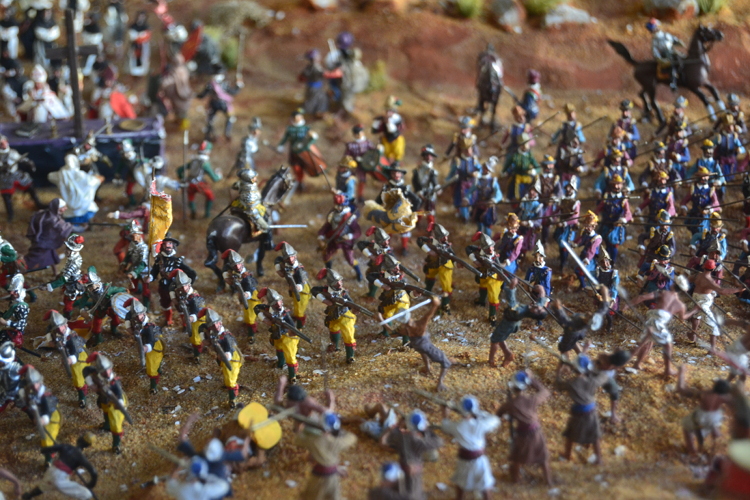 The Portuguese put up a stiff resistance. The advance guard charged into a withering fire of artillery and arquebuses and managed to push back the Moroccan center. The advance fell into confusion, however, and soon the arms of the crescent snapped shut. The advance guard was cut off from the rest of the army. The rest of Sebastian’s army hit the Moroccan flanks, but were pushed back by counterattacks. The Moroccans were too numerous, too well armed, and too fresh for the hungry invaders to beat. Soon, the entire Portuguese army was surrounded. The noose drew tighter and panic set in.

Don Sebastian, although a failure as a general, proved himself a bold warrior. He was in the thick of the fighting in the advance guard until the very end. His body was never recovered. Mohammad II, seeing all was lost, tried to flee and drowned while trying to cross a river. The strain of leading his men in battle was too much for the seriously ill Abd Al-Malik and he died that day too.

The Battle of the Three Kings destroyed the flower of Portuguese nobility. Some 8,000 troops were killed and all but about a hundred were captured. Don Sebastian had left no heir and the throne was taken over by his uncle. Within three years, the weakened kingdom would be annexed by Spain. Abd Al-Malik was succeeded by Ahmed Al Mansour, who continued the Saadi dynasty until his death in 1603. We’ll hear more about him in my next post about the Battle of Tondibi. You may also like my post on the defenses of Tangier.

Sean McLachlan worked for ten years as an archaeologist in Israel, Cyprus, Bulgaria, and the U.S. before becoming a full-time writer specializing in history and travel. He’s the author of numerous history books on the Middle Ages, the Civil War, and the Wild West. He is also the author of A Fine Likeness, a horror novel set in Civil War Missouri, and The Night the Nazis Came to Dinner and other dark tales.

I wonder what kind of story Robert E. Howard could have made out of this.

The Battle of the Three Kings and all three died? I hadn’t heard of that; it would make an intriguing tale I think for anyone to pursue.

I think the English adventurer Thomas Stukeley would be a good protagonist. Kind of an everyman the reader could relate to.

Then again, he apparently died there as well.

A great spanish poet and soldier, Francisco de Aldana, died in that battle. He has been sent as military adviser by Philip of Spain to Don Sebastian.

CMR: Yes, Stukeley died at the battle. Ah, such a shame REH never wrote about it!

Black Gate » Blog Archive » The Battle of Tondibi, 1591, in Miniature

[…] I mentioned in my last post, on a recent trip to Tangier I visited the old American Legation, now a museum. In a dusty back […]