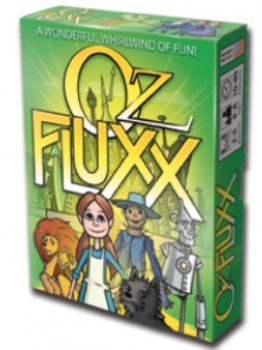 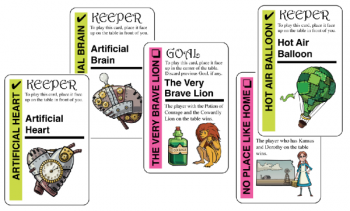 I have owned the original edition of Fluxx for at least 15 years. In fact, Fluxx is the only game that both my wife and I independently owned before we met. But this is our first time trying any of the many variant editions, so I was very interested to see how it held up.

The play is basically the same as the original, with the obvious thematic difference that all the cards are references to The Wizard of Oz. The Goals are fun combinations that make sense with the Oz-based Keepers, such as “No Place Like Home,” where you get victory by having both the Dorothy and Kansas Keepers in front of you at the same time.

This game was actually my son’s introduction to The Wizard of Oz, since we hadn’t yet watched the film or read the book, and he enjoyed the game even without having the emotional connection to the characters. When we did eventually watch the movie, I think he enjoyed having a context for the different characters, and I didn’t get any sense that it detracted from the experience.

The Creepers do make things a bit more complicated … and I’m not certain I’d say that it’s always in a good way. It’s tricky enough to get a Goal card placed to match with your Keepers that are in play, so the addition of the Creepers can cause the game to drag on a bit at times. Still, having cards for the villains that keep you from winning makes sense, so I can’t object too much.

One of my only complaints is that I’d like to have seen some references to other Oz books. The cards seemed to draw more from the original novel rather than explicitly from the film version of The Wizard of Oz, so I kept hoping to see appearances from Oz characters who came later in the series, such as Jack Pumpkinhead and Tik-tok (although I suppose these characters might have copyright issues related to the 1985 Disney film Return to Oz).

Overall, Oz Fluxx is a lot of fun and adds great dynamics to the play, but if you already own a version of Fluxx, I wouldn’t spend the money to get this version too. I don’t really see the need to buy a bunch of different Fluxx variations, though this edition does have the added benefit of being particularly appropriate thematically for young children (although kids could well get a kick out of Zombie Fluxx, I suppose).

Disclaimer: A demo copy of Oz Fluxx was provided by the manufacturer for review purposes.

Fluxx is a great game. After seeing the Tabletop episode, we bought Cthulhu, Pirate, and Star Fluxx. We also have those same themes in Munchkin.

It can be a bit random though. During one game, we had one player get up to make a phone call. When he returned we informed him that he had won, because another player had been forced play a goal that used both a Keeper and a Creeper he had played.

Fluxx is a terrible game. 🙂

I played a couple of games of the original one night with a group of casual gamers, one of which said, “Hey, let’s try this new game I bought.”

Although I understood the game as soon as cards started to be played, and my wife figured it out shortly after that, the randomness and lack of strategy killed it for us.

I’m not sure anyone else at the table really understood how to play, even after two games.