It’s with a nod to the many diverse readers of Black Gate that I begin with some explanation of who James Tiptree, Jr. was. Science fiction and fantasy veterans will know her well, but many avid readers do not know this important figure in the history of speculative fiction. My referring to Tiptree as a “her” is not a slip; Tiptree was the pen name for Alice Bradley Sheldon, a prominent speculative fiction writer who took on a masculine pseudonym because:

A male name seemed like good camouflage. I had the feeling that a man would slip by less observed. I’ve had too many experiences in my life of being the first woman in some damned occupation.

(That quote is from her profile in the April, 1983 issue of Asimov’s.) She also had a female pseudonym, Raccoona Sheldon, and even won one of her Nebulas with that name.

Her choice to write under pen names in the first place stemmed from the fact that as Alice Sheldon, she had built up a respectable reputation for herself in academia. She was a military veteran (the U.S. Army Air Forces) and had a doctorate in experimental psychology.

She chose the name Tiptree off a marmalade label and added the “Jr.” at her husband’s suggestion, then with this moniker blazed new trails in the genre, challenging concepts of gender, gender roles, stereotypes, and gender and gendered identity.

I could go on at length about this, but will refer readers interested in more on to Tiptree.org at this point while I move on to the prize she inspired.

Congratulations to the 2012 Tiptree Award Winners and Honorees

The James Tiptree, Jr. Award is “annual literary prize for science fiction or fantasy that expands or explores our understanding of gender.” (Quote from Illusion and Expectation, a speech given by Pat Murphy at the 1991 WisCon announcing the creation of the Tiptree Award.) This year, two writers share the award: Caitlyn R. Keirnan for her novel, The Drowning Girl, and Kiini Ibura Salaam for her collection of short stories, Ancient, Ancient. Any of you following my posts will know that I interviewed Salaam for Black Gate in January. 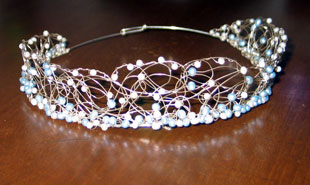 The Tiptree Awards jury chooses, along with the winners, a Tiptree Honors List. This year’s Honors go to: Elizabeth Bear (Range of Ghosts), Roz Kaveney (Rituals), M.J. Locke (Up Against It), Kim Stanley Robinson (2312), Karin Tidbeck (Jagannath), Ankaret Wells (Firebrand), and Lesley Wheeler (The Receptionist in The Receptionist and Other Tales).

Winners of the Tiptree Award receive a cash prize of $1,000.00, and a trip to WisCon for the award ceremony. They also get to wear the Tiptree Tiara, which was made by jeweler and writer, Elise Mattheson, and traditionally the winner wears it for the duration of the Con. (I do not know the protocol when there are two winners, but Salaam expressed reservations about it working with her hair the way it’s currently styled.)

Congratulations to the winners and honorees!

Heh, I think Sheldon would be cracking you upside the head for making an assumption. The tiara is worn regardless of the gender of the winner. I think she’d have liked it, and Elise Mattheson, the designer/creator of it, quite a lot. As random coincidence would have it, I went to Viable Paradise with Elise and watched her make wire wrap necklaces all during the workshop. She told me about the tiara and that’s how I knew to look for a picture.

[…] Time for us back in 2011, and Emily Mah reported on Caitlin R. Kiernan being a co-recipients of the 2012 Tiptree Award last March. And we told you about Aliette de Bodard’s fabulous Obsidian & Blood omnibus […]