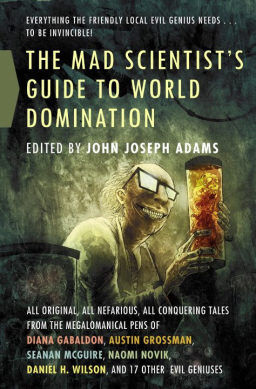 No sooner do I settle into my big green chair with John Joseph Adams’s massive fantasy anthology Epic (which I covered here just two days ago), than do I discover that he’s unveiled another great project. Packed with “all original, all nefarious, all conquering tales,” The Mad Scientist’s Guide to World Domination is available in Kindle format for just $1.99 from Amazon.com. Here’s the table of contents:

“Professor Incognito Apologizes: an Itemized List” by Austin Grossman
“Father of the Groom” by Harry Turtledove
“Laughter at the Academy” by Seanan McGuire
“Letter to the Editor” by David D. Levine
“Instead of a Loving Heart” by Jeremiah Tolbert
“The Executor” by Daniel H. Wilson
“The Angel of Death Has a Business Plan” by Heather Lindsley
“Homo Perfectus” by David Farland
“Ancient Equations” by L. A. Banks
“Rural Singularity” by Alan Dean Foster
“Captain Justice Saves the Day” by Genevieve Valentine
“The Mad Scientist’s Daughter” by Theodora Goss
“The Space Between” by Diana Gabaldon
“Harry and Marlowe Meet the Founder of the Aetherian Revolution” by Carrie Vaughn
“Blood and Stardust” by Laird Barron
“A More Perfect Union” by L. E. Modesitt, Jr.
“Rocks Fall” by Naomi Novik
“We Interrupt This Broadcast” by Mary Robinette Kowal
“The Last Dignity of Man” by Marjorie M. Liu
“Pittsburg Technology” by Jeffrey Ford
“Mofongo Knows” by Grady Hendrix
“The Food Taster’s Boy” by Ben Winters

The Mad Scientist’s Guide to World Domination was published by Tor Books on February 19, 2013. It is 368 pages in trade paperback priced at $14.99; the list price on the digital version is $9.99. The awesome cover is by Ben Templesmith. More details are available here. No idea how long the $1.99 deal will last, so take advantage of it soon.

Just finished the hardcover a week or so ago and overall I thought it was a pretty good collection. 7 or 8 of them I thought were above the average, with Jeff Ford’s story probably the most existential and depressing. But the stories are a lot of fun and some are pretty cleverly told. A solid recommend.

Not as many favorite authors as “Epic”, other than Kowal of course, but quite a few I like a lot, like Genevieve Valentine, Laird Barron (who has the coolest name), and Jeffrey Ford.

Must’ve been one-day only sale. Checked it today and it’s back at the 9.99 Kindle price. Thanks for the “heads up” though.

The Turtledove story is probably the most light-hearted and funny, while the Ford is just the opposite, the Ford could just as easily have been published in any of the regular SF publications and is a good story with something to say about a certain segment of the population that is so gullible it will fall for any get-rich-quick scheme–but with a harsh twist. He includes a reference to a two-word name in Latin which is the key clue to his take on these people. But you’ll need to look it up to “get” the story if you’re not familiar with Latin.

The vast majority are all short stories, with maybe 2 or 3 short novelettes. There’s one long novella by Gabaldon which is the only reprint from Strange Horizons.

A number, as you might imagine, deal with super-villains (or superheroes) and will be welcome by those who are fans of George RR Martin’s Wild Card series of anthologies and/or novels.

Overall, I enjoyed it quite a bit as a good bit of fun, with several pieces rising above what one might expect. It’s interesting to find how different the authors’ takes are on the theme of the Mad Scientist.

Thanks for the mini-reviews! I’m still distracted by EPIC, so it’s not likely I’ll get to dive into this one soon, but I took advantage of the $1.99 price and stored it away on my Kindle.

You’re right, unfortunately. Looks like it’s back to the regular price.

Ah well! I’ll leave the post up, as I think most of our readers would appreciate knowing about the anthology. And at $9.99, I think it’s still a bargain.

> Overall, I enjoyed it quite a bit as a good bit of fun, with several pieces rising above what one might expect.
> It’s interesting to find how different the authors’ takes are on the theme of the Mad Scientist.

Well said. It’s such a neat idea, I was surprised that no one has done it before.

In fact, I find that rather unlikely. There must have been a Mad Scientist anthology before this — but I can’t think of one!

Mine was less an actual review than just a “review” of the author’s list. I did snag the $1.99 deal, but haven’t even cracked open the book yet–if you can crack open an ebook.

Haven’t cracked open “Epic” yet either. In fact, thanks for this post because it reminded me that I wanted to buy “Epic”, which I bought at the same time as Mad Scientist.

I think you’re right, John. I couldn’t think of another original (or reprint) with this exact theme. Nor did a google and bing search turn one up. So kudos to JJA for coming up with a truly original concept.

[…] even finished the digital version of The Mad Scientist’s Guide to World Domination I bought weeks ago. I […]

[…] is edited by John Joseph Adams, editor of Dead Man’s Hand, The Mad Scientist’s Guide to World Domination, Epic, Wastelands, and many other fine anthologies. The mighty Patty Templeton interviewed him for […]

[…] is edited by John Joseph Adams, editor of Dead Man’s Hand, The Mad Scientist’s Guide to World Domination, Epic, Wastelands, the upcoming The Best American Science Fiction & Fantasy, and many other […]