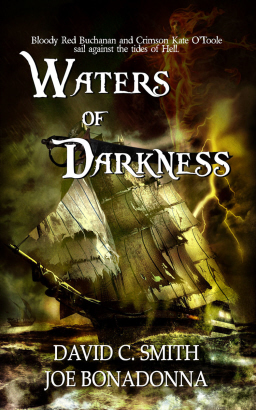 We’re very pleased to note the March 1 release date of a new novel by two Black Gate contributors, David C. Smith and Joe Bonadonna, which they describe as “the best supernatural pirate dark fantasy… EVER.” We asked Dave about the book’s genesis, and here’s what he told us:

This story is based on a ms. I wrote in 1978 that was to be a sequel to The Witch of the Indies, my first published novel, based on Robert E. Howard’s Black Vulmea character… I wrote a 50,000-word first draft in the spring of 1978 (before Witch was published) that I filed away for decades. Despite my naive enthusiasm (at the age of 24!) that Zebra would certainly want a sequel, as we know, The Witch of the Indies sank fast and has pretty much been forgotten. But! Who doesn’t love a pirate story? Joe asked to see that old, yellowing (literally) draft and went to work on it. So we wound up collaborating — at a distance of 35 years, in a way — and have written what we both think is a terrific pulp-style pirate dark fantasy.

Joe took my rough draft, added at least 10,000 words to it, recrafted who knows how many thousands more, and brought in new characters, new developments… He went to town and really brought the thing to life.

David and Joe’s last collaboration for us was The Big Barbarian Theory, one of the most popular articles on the Black Gate blog last year. We featured David’s The Fall of the First World in December, and posted the complete text of Joe’s Dorgo the Dowser novella “The Moonstones of Sor Lunarum” last Sunday.

Waters of Darkness was published by Damnation Books on March 1, 2013. It is 60,000 words and currently available in Kindle format for $5.95. The wonderful cover is by Dawne Dominique. More details at the website.