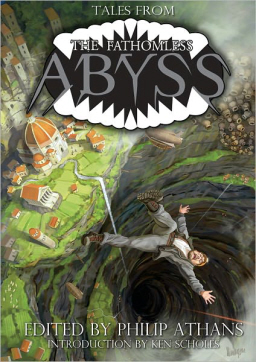 I’ve never been a huge fan of shared-world anthologies — which is strange considering I was a voracious fantasy reader at the height of the genre, the late 80s, the era of Terri Windling’s Borderlands, C. J. Cherryh’s Merovingen Nights, Will Shetterly & Emma Bull’s Liavek, George R.R. Martin’s Wild Cards, and the great granddaddy of them all, Thieve’s World.

But some recent projects have begun changing my mind. It started with Welcome to Bordertown, the 2011 anthology that our own Patty Templeton called, in her own special manner, “Really GD awesome. I freakin’ loved it.” It continued with Scott Taylor’s Tales of the Emerald Serpent, the tremendously successful 2012 project that includes fiction from Lynn Flewelling, Harry Connolly, Juliet McKenna, Martha Wells, Julie Czerneda, and many more.

Now comes word of a shared world project that sounds just as intriguing: Tales From The Fathomless Abyss.

Descend into the world of the Fathomless Abyss, a bottomless pit that opens who-knows-when onto who-knows-where, just long enough for new people from a thousand different worlds and a million different times to fall in and join the fight for survival in a place where the slightest misstep means an everlasting fall into eternity.

Tales from the Fathomless Abyss features six new short stories, and it’s only the beginning. From here, each author will branch out to spin a series of new books sharing this impossible, explosive, infinite setting.

The anthology is edited by Philip Athans. It includes an intro by Ken Scholes and original contributions from Mike Resnick & Brad R. Torgersen, Jay Lake, Mel Odom, J.M. McDermott, Cat Rambo, and Philip Athans. Two of the promised follow-on titles have already been released: Devils of the Endless Deep by Phil Athans, which expands on his short story from the anthology and plays with the strange time travel aspects of the Fathomless Abyss setting, and J.M. McDermott’s Nirvana Gates, which takes the setting to the next, deeper level. It also features an excerpt from the next book by Cat Rambo, due in two months. That one will be followed by standalone novellas by Mel Odom, Mike Resnick and Brad Torgerson, and Jay Lake.

Best of all, the introductory anthology Tales From The Fathomless Abyss has been released at the can’t-turn-it-down price of $0.99 for the digital version. Check it out, and get in on the ground floor on an exciting new series. You can buy it today from Barnes & Noble and Amazon.com.