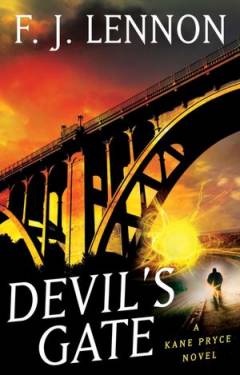 I began reading an advanced copy of Devil’s Gate on August 5th, a full two weeks before the tragic news that Hollywood director Tony Scott took his own life by jumping from the Vincent Thomas suspension bridge in San Pedro.

Devi’s Gate could be about this bridge, but it isn’t.

Devil’s Gate, in which a “suicide bridge” plays a pivotal role, is actually the second in F. J. Lennon’s series which kicked off in 2011 with Soul Trapper and follows the turbulent life of rogue ghost hunter Kane Pryce. Without having read the first installment, I was initially concerned Devil’s Gate would seem diminished without the knowledge of Soul Trapper’s back story.

I am as excited as a goth chick ever gets, to report this is entirely not the case.

Here’s the low down…

Twenty-eight-year-old Kane Pryce used to have one of the strangest jobs in the world—capturing and exorcising spirits from people’s lives. After the stress of the job finally got to him, he left ghost hunting and has been busy reinventing himself as the lead guitarist of a band on the brink of success. But it isn’t long before Kane is asked to investigate a case involving Pasadena’s infamous Suicide Bridge, and gets sucked back into the supernatural realm. A mysterious force is luring hopeless victims to their death off the bridge, and Kane must discover what power is keeping the lost souls trapped there.

As Kane uncovers the sinister, deadly secrets of the bridge, he spirals into the dangerous, shadowy world of the occult—the seedy underground world of the Hollywood music scene, tumultuous romances, and maddening journeys into the shattered minds of suicide victims. With the Soul Trap as his only defense, Kane must combat evil supernatural forces on a spiritual battlefield, a place between life and death, where the fate of his own soul hangs in the balance.

Interestingly, Lennon is a game designer by original profession and the Kane Pryce series began its life as an iPhone audio adventure.

I readily admit this initially made me ever-so-slightly skeptical as to the potential quality of the Devil’s Gate story line. Gaming sometimes (with an emphasis on “sometimes”) translates into a decent film, but even more rarely makes the leap into a fully realized, stand-alone work of fiction.

Add to this the fact that the premise deals with a topic that is a personal favorite and I was cringing pretty much before I’d cracked the cover. Supernatural beings meant to be picked off with an automatic RPV shotgun in the virtual reality of a Wii somehow don’t give me the same chills between the printed pages.

But Lennon made the proverbial leap as convincingly as one of his doomed characters, primarily (I believe) because the paranormal has always lingered near him.

As Lennon told The Big Thrill:

The house I grew up in was paranormally active, so ghost stories weren’t just fictional tales in our home. I saw and heard things I couldn’t explain at a very early age, so that piqued my curiosity. I also grew up near Saint Vincent College (where I eventually attended college). It’s a very old Benedictine monastery and liberal arts college – and a very haunted place. I heard countless ghost stories that fascinated me directly from priests who were friends of the family. I continue to investigate haunted locations. So, yes, I’ve always believed in, and been drawn to, the paranormal. I don’t just write ghost stories, I live them. 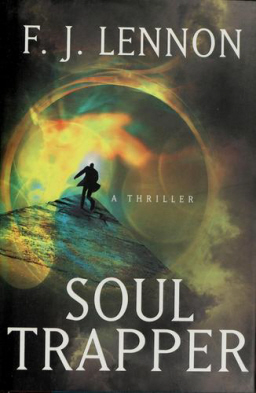 And as a California native, Lennon drew significant inspiration for Devil’s Gate’s real “main character” from an actual bridge near where he grew up.

It doesn’t get any more authentic than that.

When the beautiful bridge along Colorado Street over the Arroyo Seco River bed was built back in 1912, the builders likely never imagined it would acquire the nick name, “Suicide Bridge”: a name it was tagged with as far back as 1932. The structure has been the sight of over 100 deaths, where victims plummeted the 150 feet to the ground below.

The first suicide was on November 16, 1919, and nearly fifty of the suicides occurred during the Great Depression, from 1933 to 1937. Another report indicates that ninety-five people committed suicide from the bridge between the years of 1919 and 1937. The bridge underwent a twenty seven million dollar renovation in 1993, during which it received a suicide barrier. This reduced the number of suicides, although the bridge still retains its nickname.

Along with the suicides, of course, came the ghost stories which so intrigued Lennon and provided direct story lines in Devil’s Gate.

Several spirits are said to haunt the bridge, including a man with wire-rimmed glasses and a vanishing woman in a long flowing robe. She is often seen standing atop one of the parapets, vanishing as she throws herself off. Even below the bridge, ghosts are said to walk the river bed. Strange sounds and cries echo throughout the dark nights. Misty forms have been reported and animals act strange in the area. Homeless people camping under the bridge have regularly reported seeing ghostly figures and hearing mysterious noises.

Urban legends naturally surround the history of the bridge as well. During the bridge’s construction, a worker apparently toppled over the side of the bridge and fell into wet concrete below. He was, according to rumor, left to die in the quick drying cement, entombed forever. Of course, he’s now a ghost haunting the bridge. Some legends state that he’s the reason the bridge has claimed so many lives, that his ghost calls to those in crisis, urging them to come to the bridge and take their own lives.

Another story surrounds a suicide attempt that supposedly happened on May 1, 1937. Supposedly having been left by the father of her child and unable to secure work, a mother threw her baby girl off the bridge and then jumped over herself (apparently so they could be together in the afterlife). In a remarkable twist of fate, somehow, the baby landed in the thick branches of a nearby tree, but the mother plummeted to her death. She now is also rumored to haunt the bridge, still searching for her baby.

With extremely artful and engaging prose, Lennon has woven these tales into a highly entertaining and unique good vs. evil tapestry that hooked me from the first chapter. In addition to the paranormal, Devil’s Gate is liberally seasoned with the ego and smarm of the music industry to a level of detail that made me think Lennon himself may have been a musician. Alas, by his own admission he’s never done more than tamper with guitar playing.

Word is that we’ll be seeing more of Kane Pryce in a third installment tentatively titled Hellfire and ultimately the entire series will be comprised of either six or seven novels.

Am I the only one late to this party? Have you read Soul Trapper or are you familiar with F. J. Lennon? Post a comment or drop a line to sue@blackgate.com.

A five-bat salute to you Mr. Lennon. You may just be my new goth chick crush…

[…] Awhile back I developed a crush on bad-boy musician and ghost hunter, Kane Pryce. […]