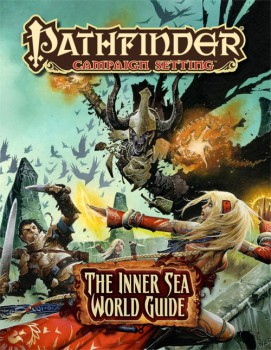 My very first campaign setting, as probably the bulk of old time gamers would also claim, was The World of Greyhawk. I still have great nostalgia for that world, and the classic adventure modules set in it, but sometimes you just need to upgrade, you know? I mean, Greyhawk is over thirty years old, and has gone through a number of facelifts, but still it’s always nice to try on something new.

And speaking of new! How about Paizo’s Pathfinder Campaign Setting The Inner Sea World Guide. I mean the name alone is worth the price! I’m not sure when the first time I saw this book, but I know when I did I WANTED IT!

Pathfinder is already an outstanding supplemental system, with a massive amount of core books, adventure paths, and gazetteers, but if you’re looking for a new age setting or simply want to steal some quality ideas for your own world, this book is an incredible resource.

As I delved into the pages it was like opening a Pandora’s Box of fantasy grandeur. The book begins with a nice expansion of the races of The Inner Sea, and like Iron Kingdoms did some years back for their setting, Paizo defines twelve different human races before delivering a nice history on the usual suspects like elves, dwarves, and the like.

I was intrigued by this kind of detail, and as I flipped through the different races I couldn’t help by smile at those chosen and the great adventures that could be set in a country populated by these individuals.

Of course if you’re going to have that many human races, you’ll need places where they are from, and that’s truly what The Inner Sea supplement is about. Now I’m not pulling your leg here, but this book is the most complete fantasy setting I’ve ever seen to date. It’s like someone at Paizo [I’m blaming James Jacobs!] got everyone in the company together and dared them to throw Earth’s history into a bucket before dumping the best concepts of novel fantasy on top of it, and I mean this in a good way.

I mean when you look at the list of contributors, it’s like a veritable list world-building mafia with Ed Greenwood, Sean K Reynolds, and Jeff Grubb to name a few.

Anyway, let’s get down to it. The Inner Sea consists of a mass of land, and this book details not ten, not twenty, not thirty, but forty-three nations inside its boundaries. It’s so inclusive I have to wonder if anything was missed, and to date I’ve yet to find something. But if you want me to break it down, I’m going to give it a shot in the next paragraph. 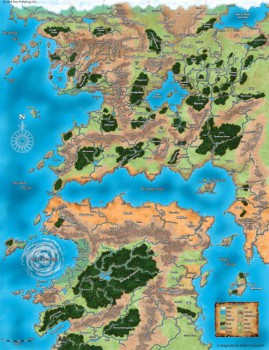 So, here is a very inadequate list of what you will find inside the Inner Sea… A massive free city, a merchant republic, an orc nation, a demon-pact empire, a underground nation of drow, plainsmen, a dwarven stronghold, a revolutionary state, a dominion of the dead, fantasy-Russia, a servitor nation to an evil thrall, fantasy-Arabia, a beautiful elven kingdom, fantasy-Rome, a fantasy-Viking nation, a wild caveman nation of mammoth riders, a magical dead-land, a land of assassins, a crusader theocracy, a country of military expansionists, a dinosaur jungle, a wizard’s golem dominion, a twisted nation of masochists, a rural land of rangers, a savage land of super-science, fantasy-Egypt, a land of a living god, a group of thief-run river cities, a lost Mesoamerican nation, Pirate isles, a dragon-run land, a failing empire, a gothic horror nation of vampires, a frontier borderland, and last but not least a gate to invading demons hordes.

I didn’t hit them all either! But wait there’s more!!!

Now after we get all of the Inner Sea, we get to go into space! I’m serious. I nearly wet myself with glee. Now it’s no secret I love TSR’s Spelljammer, and obviously someone at Paizo must as well because the next chapter in the book goes into great detail about the Golarion Solar system and all the awesome worlds in it! I’m freaking out even as I write this because it’s all so cool, and I promise you that no company I’ve ever seen has done this one before. I mean when I read something like ‘Liavara the Dreamer: Several colorful rings surround this immense gas giant, as do a large handful of moons, some of which are inhabited’ I ready to grab the nearest Hammership and take to the skies.

Oh, and you like time travel? How about going into the Inner Sea’s history for a campaign among the great lost empires? They’ve got a chapter dedicated to that as well!

Then we move into religions with an in-depth look at ALL the gods of Golarion as well as Archdevils, Demon Lords, Eldest, Elemental Lords, and a full section on philosophies. 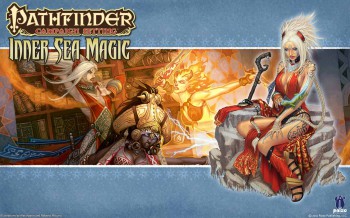 So I’ve hit page 237 of this massive tome, and there’s still a good quarter of the book left. I know what you’re thinking, and it’s the same thing I was ‘what more could there possibly be!?’

Well, how about putting in a section on the Planes! Sure, why not, and if that isn’t enough, Paizo packs in an extremely cool section on Life in the Inner Sea.

Then we hit Factions, a fantastic section on how secret and not so secret societies function, how they compete with nations, and what they mean to politics as a whole.

They also throw in a nice piece on adventuring, and show us the Harrower prestige class as well as the Hellknight, Low Templar, and Red Mantis Assassin before dropping in a couple dozen Feats just too wet your appetite on further character customization.

That has to be it, right? Wrong! You still get equipment and some new magic items, because what book wouldn’t be complete without some great gear to get players and DM’s excited for the next treasure trove.

Ok, so the book is done… Not! Paizo still wants to give you a few new spells for your casters to play with and then, yes then, we get to the new Monsters section.

Just unreal… And after the index you get a full-sized removable and fold out map of the entire Inner Sear. So I reiterate, this is the most insanely packed gaming supplement to ever hit the open market for any gaming system the world has ever seen. A convoluted sentence? Sure, but it has to be to even come close to explaining what this book is. If you buy one new product this year, I strongly suggest making it Paizo’s Inner Sea World Guide because there is something in this baby for everyone, from the Old School Grognard to the Beginner Box novice.

Dang Scott! You really know how to sell a product. I had no intention of looking at this book. I just read it because I enjoy reading your posts. Now I’ll have to give it a closer look.

Glenn: I’m dead serious when I say this is a must have monster. I’ve had my own gaming world since 1987 and I still love this book and can’t wait to use dozens of awesome things inside it. Oh, and THANKS for being a loyal reader of my work, it means a lot! 🙂

A beautifully produced book, when I’m reading mine I usually forget that I’m supposed to be making notes! Great review.

Bill: Totally agree! And thanks for your vote of confidence. Coming from our resident ‘Review God’ those are some strong words.

I don’t even game, but I just ordered a copy based on the review. (I still enjoy reading the occasional world book and the like.)

Joe H: Well, I’ve officially done it, gotten a non-gamer to buy a gaming book just to read. Yep, my life is complete! 😉 I know you’re going to enjoy it, Joe, and please fill me in once you’ve had time to sit with it a bit.

Well welcome back on board! 😉

The continued existence of this book, along with Bestiary 3, outside of my possession is a constant source of torture.

Theodric: Now that is funny! 🙂 But agreed, both those books are kind of must haves in my opinion.

Awesome review. You had me at “Dinosaur Jungle.” Off to add this to my Amazon cart…

Oh, and maybe you can clear up a mystery for me. Back in 2008 Paizo released a hardcover Pathfinder Chronicles: Campaign Setting, which quickly went out of print. I assumed, as a cornerstone of the Pathfinder line, it would quickly be reprinted, so I’ve avoided paying astronomical prices for it on eBay.

However, four years later it still shows no signs of ever being reprinted. Has it been completely been superseded by the Inner Sea World Guide? Or does it cover different material, and do I need to track it down?

John: You know, I’ve kind of wondered the same thing. I remember seeing the Campaign Setting in a B&N, but at $50.00 and with Pathfinder a unknown entity at that point, I passed on it [and it was a rather stale setting when I flipped through the pages]. I certainly don’t know this for sure, but I’d say it was a super rush job to help establish not only the brand but the bread and butter of Paizo’s line, their new Adventure Paths which needed a place to grow. Once the Core Rulebook came out and their product was in full bloom, they pulled the Campaign Setting and started work on this tome, a shining example of what they’ve managed in their few years in the marketplace. When I initially saw this I thought ‘huh, the Inner Sea must be a new part of their yet un-detailed world…’ but in reality it IS their world and they have now made it a wonder to behold. So, long story short, Inner Sea IS the Pathfinder Campaign Setting.

You’re right Scott, this is essentially the new or finalized version of that Campaign Setting book; I’ve read through the CS in pdf and it is basically an older and less comprehensive version of this and, if i recall correctly, one that isn’t as specific to PF as a game (it’s an OGL product meant for D&D 3.5). There was also a slender softback Gazeteer that sort of bridged the gap between the Campaign Setting and Inner Sea Guide that came out after the Core Rulebook, but this current book has replaced both of them, it’s the uber-tome for the PF setting.

Pathfinder makes some great books — now that I can justify buying them as ‘work’ I’ve pretty much lost all self-control.

Thanks Scott (and Bill)!

Got my copy today and it truly is a thing of beauty. Also picked up the city guide because I’ve always had a thing for fantasy city write-ups and maps.

So am I the only one who flips through something like this and immediately wants to read the novel that starts in the dinosaur jungle and ends on the airless world covered with cities of the undead? Or vice versa?

[…] the planning and character creation is half the fun. The setting, especially as outlined in the Inner Sea World Guide, contains a lot of opportunities for diverse storylines, from traditional fantasy to sword and […]

[…] Scott Taylor @ Black Gate took some time to review Paizo’s Pathfinder Campaign Setting: The In…, diving into the insane amounts of crunch within this massive tome. Forty-three nations. Maps up the wazoo. I think he was impressed. 🙂 […]