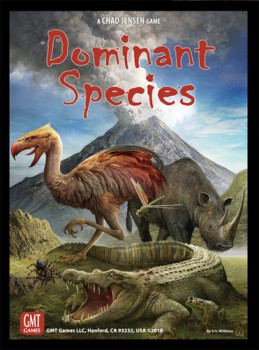 While my last few columns have focused on solitaire games, I thought I’d take a look at some relatively new boardgames with surprising themes and game play.

In the first, Defenders of the Realm, you and your fellow players cooperatively work to defeat evils invading your kingdom.

The second, Dominant Species, is set in the moments before the ice age and enables you and your fellow players to jockey for position to see who will best weather the coming climate change.

Though you may not find either game in your local Target or Walmart, they are beautiful, professional products. Neither’s as straightforward as, say, Monopoly or Scrabble, where you can get a feel for what to do after a brief tutorial, but for the family or game group willing to invest a little bit of time, they’re sure to provide years of entertaining play.

As a veteran of role-playing games, I’m familiar with cooperative gameplay, but I’d never really seen it in a board game before. In Defenders of the Realm players  take on various familiar fantasy roles –wizard, ranger, cleric, paladin and several others (including Barbarian, in a small expansion package) and defend the realm as it’s assaulted by a whole host of baddies. In the standard game there’s an evil dragon, an undead lord, an orc general, and a demon thing. The big baddies start at the edge of the board and work their way toward the capital of the realm, sort of like Gozilla wading through traffic to the center of town. To make things even more challenging, though, minions of each of the big guys get summoned to new locations on the board every round.

The movement of the bad guys, as well as various quests that the good guys take to find

treasures to assist in their battles, is driven by card draws. An overall winner will result… but here’s the thing – it’s almost impossible to defeat any one of the overlords without assistance, and during the battle, if you play your options right, you can maneuver to deliver the last blow and score the victory.

As you would expect, each of the player roles has different strengths and abilities. The wizard, for instance, can teleport to places on the board rather than having to spend movement points, and the eagle rider can fly.

The caveat is that the rulebook is extensive, even a little daunting, though the rules in play are pretty straightforward. We got over the learning hurdle about halfway through the first game, and Defenders of the Realm quickly became a favorite here in the Jones castle. Watching my kids play reminds me of the fun I used to have playing Dark Tower. Except that Dark Tower never had expansions to add even more variety, like new dragon lords, or new character types.

I can see that Defenders of the Realm, while seemingly complex at the outset, might be embraced by gamers more used to Clue and Monopoly. Dominant Species is a fabulous game, but it’s not for casual gamers. It is laden with rich options sure to delight those who enjoy tactical and strategic challenge, but to achieve those rewards, players will have to try several rounds before the possibilities become more obvious. Once they do, though, they’ll be playing one of the most well-structured, flexible, and enjoyable strategy games on the market.

Dominant Species offers its players the chance to be one of six species – insects, amphibians, mammals, reptiles, birds, or arachnids, all competing for dominance in a host of different environments. As the turns progress, not only are characters competing for land space, they’re maneuvering to diversify the different kinds of food sources they can consume, placing new land areas to colonize, designating what sorts of resources become more difficult to obtain, and even placing tundra tiles on their opponent’s land spaces, effectively freezing them out. Once everyone has the rules down, the game moves quickly, and interactively. The numbers of variables virtually ensures that Dominant Species won’t go stale, and means players have to keep on their toes in a constantly shifting environment – which is certainly apropos .

The themes in some games seem tacked on as an afterthought, but that of Dominant Species is integral. It may be the finest science-themed game that I’ve ever played, and is certainly one of the better tactical games, with the added benefit that it does not play slowly. It really imitates a sense of kill or be killed, adapt or die. As an added bonus, the board and pieces are lovely, durable, and beautifully made. If your (older) kids enjoy science or pre-history, or if you like a good tactical challenge and want to try out a theme without tanks or swords, Dominant Species is highly recommended.

One co-op game that can be fun is Arkham Horror. It’s also very complicated so takes a play-through or two to fully get the rules.

There are some really good co-op games around. Another bonus being that many of them by their very nature can also be played solitaire.

Arkham Horror as recommended above is definitely worth it if you like Lovecraft. Has several billion expansions too so will last a while.

Pandemic and it’s little brother Forbidden Island are both fun

I just grabbed the new Lord of the Rings card game too which is a co-op card game with regular (non random) expansions due out. Really enjoying that at the moment.

I love these board game post Howard. I can second the vote for forbidden island. although that one is best for children i think. I bought it to play with my friends kids who are 11 10 and 6 and they love it. best of all it forces them to work together so there’s no fighting over who won.

I’ve also been looking at Space Hulk:death angel which is a small co op card game. its light but it looks pretty good.

weateallthepies i’ve been looking at Lord of the rings i just feel like the scenarios would get old.

The Moose and Pie Eater, I hadn’t heard of Arkham Horror and now that I see all the supplements I wonder how I missed it. Pandemic I was aware of, though I haven’t played it yet. Some reviewers compare Defenders of Realm to it because of a similar mechanic, but say that Defenders of the Realm is more fun. I can’t say one way or the other.

My kids are just getting old enough to play these with me. The first run through of Defenders of the Realm might have exhausted their patience if the pieces weren’t so cool, but once I understood the rules better we all had fun.

Glenn, glad you’re liking these posts. I have more game reviews coming your way, although this coming week I might post on a great new writing book instead.

Glenn, Space Hulk: Death Angel is a great but it’ll make you cry. 🙂 I think I’ve beaten it once or twice solo. There is some crossover with the LOTR card game, at least in the way they both play very puzzle like. I’ve not tired of it yet, there are a lot of choices to make during play so I can’t see it getting old any time soon. To me though it does play more like a complex puzzle than a narrative, though the theme and art certainly makes the game. If it does get old then the planned expansions should help.

Howard, I’ve played pandemic but not defenders so I can’t say either. Arkham is one of my favourite games, love the theme, it does however take forever to set up and play so it doesn’t get played as often as I’d like.

I’ll echo the enjoyment of these posts, though a large percentage of the posts here seem to align with my interests so it’s all good.