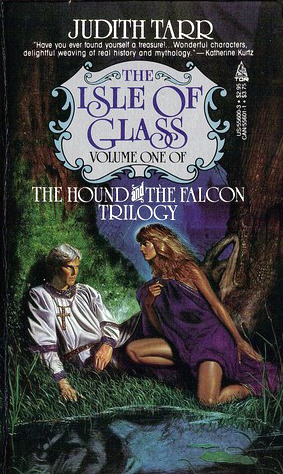 The Isle of Glass, by Judith Tarr
The Hound and the Falcon Trilogy, Volume 1
St. Martins Press (276 pages, hardcover, February 1985)

Isle of Glass is the sort of book that will work excellently for some people and not for others, based both on the knowledge needed and the subject matter.

It’s fairly short, but dense and somewhat challenging. For instance, I think I have a fairly decent vocabulary, but I encountered a few words, like “crozier” or “thurifer,” that I didn’t know.

(According to my dictionary, both words are church terms. A crozier is an abbot’s staff; a thurifer is someone who carries a censer.)

The story centers around Alfred of St. Ruan’s Abbey, a monk who doesn’t seem to age. He was found in the snow, on the solstice, being warmed and protected by three white owls. Between his origin, his age, his inhuman beauty, and his ability to work magic, it’s quite clear to anyone who knows Alf that he is one of the Fair Folk, and the fact torments him.

Although Isle of Glass is technically an alternate history – this world contains at least one extra country, and the real countries seem to have somewhat alternate names – it’s still set in a version of medieval Europe, and not a sanitized or tolerant one. It’s widely accepted that sorcery is evil and elves have no souls.

Alf buries himself in the small world of the monastery so he doesn’t have to think about such things – he’s only somewhat successful – but his isolation is broken by the advent of an injured knight named Alun. Alun is a member of Alf’s species, the first he’s ever met, and he was trying to prevent a war before he was captured and brutalized. 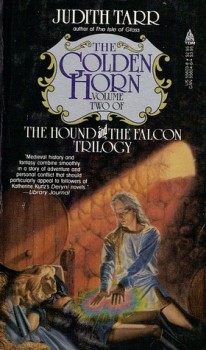 To keep Alun from injuring himself further, Alf takes on the same mission. To complete it, he won’t just have to leave the abbey; he’ll have to convince the king of Anglia that war isn’t the best option. Unfortunately, said king is Richard the Lionheart, not the most peaceful of men at the best of times.

The plot of this story is all about Alf struggling to prevent a war while surrounded by prejudice and witch-hunting churchmen. The meat of the story is Alf’s conflict with himself. For years, he’s pretended to be peaceful, humble, and everything else a monk should be, and finding out it isn’t the whole truth sends him into a tailspin of overreaction.

He also has severe issues surrounding sex, which is one reason why this book won’t appeal to everyone. Alf is flatly not attracted to humans, which is something that would sit better with me if the elves of this story weren’t portrayed as better than humans in virtually every way. However, humans – including more than a few male humans – are quite to attracted to Alf. When he becomes close to King Richard, more than one person assumes that he used sex to do it.

The one consummated homosexual relationship in this book is portrayed as highly unhealthy, and while I don’t find it unrealistic given the era, it’s also not something everyone wants to read about. Anyone who’s been a victim of homophobia might find their skin crawling at certain scenes, such as the group of squires who attempt to bully Alf into proving his manhood.

I’m not criticizing the book for this – prejudice, nastiness, and religious condemnation fit with the setting – but that doesn’t make it any more pleasant.

This book also assumes a fairly high degree of knowledge in its readers. For instance, a hostile churchman jumps instantly on Alf’s nickname, finding it significant. This is because, essentially, Alf means elf. I’m not sure I’d know that, however, if it weren’t for my small but well-used collection of naming dictionaries. 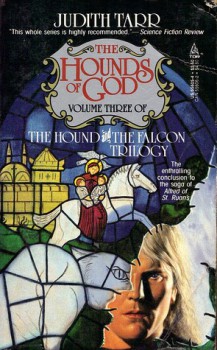 Church terms are almost never defined, which makes sense—the viewpoint characters are all extremely familiar with them – but it’s easy to feel snowed under if you’re unfamiliar with words like “alb” or “dalmatic.”

The attention to medieval detail is fastidious in this story, and that’s something which will be a delight to some people and a turn-off to others.

Although I was a little bit turned off by the elves’ superhuman qualities, I found the scenes where human beings react to magic to be very well-drawn indeed. Jehan, Alf’s faithful companion, gets an especially nice one near the beginning of the book.

Also, looking back on it, I think some of my instinctive protests about the elves are probably missing the point. I suspect I want the elves to have more weaknesses because I’m used to adventure stories – a good vulnerability always increases tension – and this isn’t one. This is a story about introspection, a political story at times, a book about a man trying and sometimes failing to accept himself.

If you’re interested in that sort of story, or in medieval Catholic intrigue, it’s definitely worth a look.

Interesting review — I’d never heard of them before, but I’ll keep an eye out now. Thanks!

I have an SFBC omnibus of the three books I obtained over twenty years ago that shamefully I’ve never read. I’ll have to try to unearth it and read it — your review makes it sound like my cup of tea. Thanks!