Conan is one of the most influential characters in all of fantasy. His influences has always been felt in the background, but he’s getting a lot more press lately due to an upcoming film adaptation (complete with new trailer). This supplement, reviewed by Jeff Mejia, focuses  not on the man so much as the setting … or rather, a type of setting which is woven into many of the greatest Sword and Sorcery tales (and games). 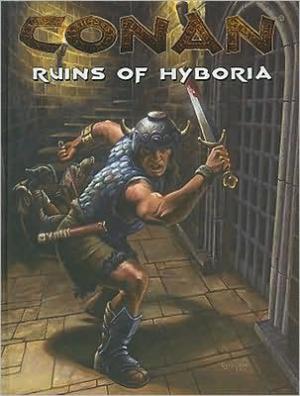 Like many of you, I’m one of those who actually read The Lord of the Rings decades before the movie came out. I would get the books out every couple of years and reread them, and as I did so I would wonder what this locale would look like or how to create that character using my favorite gaming system. When Peter Jackson’s epic movie trilogy came out I was an instant fan; sure they left out a couple of favorite characters and missed a few beats here and there, but for all of that I finally had a glimpse of Middle Earth beyond the Brothers Hildebrandt calendars. For me Jackson’s The Lord of The Rings was a feast for the eyes. And such is the case with Ruins of Hyboria.

From Conan to Thundarr, Ruins have been a staple of Sword and Sorcery fiction. In Ruins of Hyboria by Vincent Darlage, we are not only provided with a system to help create and flesh out ruins of our own creation, we are also treated to full descriptions of some of the more famous ruins in the Conan saga.

Created for use with the Conan Role Playing Game from Mongoose Publishing, Ruins of Hyboria starts with a unique system for generating ruins. I say unique because it goes much further than just laying out size, location, and denizens. The generator takes into account many of the social aspects of the ruin back when it was a thriving and vibrant location. What was its nature? Who were the builders? How did it meet its fate? And so on. Ruins of Hyboria allows a game master to get down to the level of detail as to what types of clothing and musical instruments would be found in the ruin’s treasure chambers. The particulars are up to the game master to apply or ignore, but just the fact that such detail is presented for consideration is appealing.

The next section gives an overview of various Hyborian nations and the different types of ruins most likely found within them. It links the ruins not only with the current population (legends and rumors about them) but also with the motivations of the builders. Each description is just two or three paragraphs in length but it conveys enough for the game master to choose from, and begin fleshing out, a ruin for his own use. Personally, I would have liked to have seen this section expanded. Most of the ruins described are of cities. More information on temples, border forts, villas, and villages would have been welcome. One such locale was the Castle of Count Valbroso, who met his end in the Conan story “The Hour of the Dragon;” I thought its addition was a nice touch.

Ruins of Hyboria then goes into detailed descriptions of ruins from some of the most popular Conan stories such as “Queen of the Black Coast,” “Red Nails,” “The Devil in Iron,” and others. Histories, legends, layouts, maps, and denizens of these ruins are provided. I really enjoyed reading these interpretations of locales from some of my favorite Robert E. Howard stories. For example the Ancient city of Dagon:

“Crouching there, he stared down into the streets of a city. The circumference of the wall was not great, but the number of green stone buildings it contained was surprising. They were three or four stories in height, mainly flat-roofed, reflecting a fine architectural style. The streets converged like the spokes of a wheel into an octagon-shaped court in the center of the town, which gave upon a lofty edifice, which, with its domes and towers, dominated the whole city.”
– The Devil in Iron

Darlage connects these and other passages from the Conan saga to form a section on The Green Stone Cities that shows the similarities in the locales found in “Iron Shadows of the Moon,” “The Devil in Iron,” “Xuthal of the Dusk,” “Drums of Tombalku,” and “The Pool of the Black One.” Darlage takes these snippets and works them into an entry complete with a sample map for any game masters looking to have their characters adventure in Dagon or any of the other cities from Howard’s stories.

The final section is a sort of GM’s toolkit of advice and tips for running an adventure in a ruin setting. Darlage offers a selection of scenarios and adventure hooks that illustrate the various ways an inventive game master can get his players from the safety of the tavern to crawling through the scorpion-infested rubble of the nearest ruin. And he shows that there are more hazards than just the ravening packs of ghouls to contend with. A well placed mechanical trap could be the group’s worst nightmare. To illustrate this he gives us three pages worth of traps, from simple arrow traps to the “wide mouthed spiked pit with poisoned spikes and Grey Lotus dust.”

Unfortunately, for all the risk to life and limb the characters are asked to go through, the section on the treasures one can find in these spider-haunted ruins is sparse. This is clearly one of the weaker sections of the book. A mere page and a half is given over to some very general descriptions of the treasures the heroes can hope to abscond with – chairs of ebony and ivory, an ivory pedestal, tapestries from Turan, and so on. I understand that describing “heaps and piles” of miscellaneous precious goods is in line with the stories, but a few detailed descriptions of choice items would really have helped flesh out this section.

A handful of new Feats (actually just three) specifically geared towards the Hyborian age tomb raider round out this section, followed by a bestiary of dinosaurs, serpent men, and other creatures unique to the Conan tales, as well as special rules for handling swarms of bats, scorpions, centipedes and more. There is even a series of tables that allow the game master to custom create his own unique “Horror from the Ruins.”

As with almost all the books in the Conan Line from Mongoose, Ruins of Hyboria is an excellent sourcebook even if you don’t use the D20 rules engine. Furthermore, the information and advice could be applied to just about any era of gaming from high fantasy or Pulp to a space saga on a newly discovered planet (every genre has ruins, right?)

Besides the disappointment with the treasure section, the only fault I can find in this book is my own dislike of the cover art. The picture on the cover looks like a stunted Conan in the middle of a jailbreak, rather than our hero entering a ruined temple. I know, “don’t judge a book by its cover.” But I do it all the time. I’m just glad I was able to get past the cover of Ruins of Hyboria and into the treasure trove of gaming goodness within.