When I first crawled to the surface to whisper of monsters in your ears — before pinching off those delectable auricles with my first layer of incisors — I said I’d be back in a month with a lowdown on the greatest monsters from the pages of heroic fantasy, maybe even with a Top 10.

Sure, three of your months have passed, but why would a creature of the abyss even give a damn about human timetables? As for a Top 10 — well, to be clear, I regard your arithmetic and integers in equal contempt. In truth there are only two ways in which you matter: either when you’re sustenance (i.e. lunch) or making a complete troublesome nuisance out of yourselves with your flaming swords, silver bullet-shooting AK-47s and your brandishings of various items of religious iconography for the sake of the futile postponement of your inevitable fate (as lunch).

As evidence of the innate inferiority of your puny mortal selves, I proffer the fact that your responses to my request to name the titans in the pantheon of monsters were, as your kind says, all over the map. I hypothesized that beyond Grendel and Tolkien the monsters that populate heroic fantasy haven’t been so shiver-some, and indeed most of you extended trembling hands into other subgenres to draw out the denizens that frighten you most. (With one major exception, which I will explain in detail when I’m good and ready.)

The list of horrors I am about to inflict on you is guided by three factors. First, whether or not said creature was mentioned by more than one person who responded to my first posting. Second, whether or not I could find suitable fan art to illustrate said beast. Third, whatever whims happened to strike me — I mean, how much consideration does one really owe one’s food?

So here’s a sampling of who scares you.

1) The Shrike. No terror from beyond space and time received more mentions than Dan Simmons’ Shrike, the antagonist of his Hugo Award-winning novel Hyperion and its sequels. I have not read these books myself, but I lift this delightful description straight from Wikipedia:

The Shrike stands roughly three meters in height and is described as being composed of razorwire, thorns, blades, and cutting edges, having fingers like scalpels and long, curved toe blades. It is basically a gigantic, bladed killing machine … Preferring to perform vivisections on its victims, the Shrike generally ‘appears’ near its victims and blinks about them before killing them in a flash of opening flesh and gore; sometimes it leaves its victims alive and transports them to an eternity of impalement upon an enormous artificial ‘tree of thorns’ in Hyperion’s distant future. The tree of thorns is described as unimaginably large, alive with the agonized writhing of countless human victims of all ages and races.

2) Randall Flagg. An argument can be made that Stephen King’s monstrous novel The Stand is an epic fantasy in its own right, something that bears more kinship to epic quests and battles than to intimate horror, despite its Apocalypse Now setting. (Full disclosure: I remain grateful that I’ve only read the original 800-page novel, now out of print, and not the bloated 1,000-page revision/expansion.) In that novel, Flagg is the Devil’s representative on Earth, something both less and more than human. He returns again and again in King’s work as the embodiment of evil, in different guises, under different names, but his first appearance in The Stand was has been enough to emblazon him in our memories, such that when he returns, we remember who he is. Again, Wikipedia is my friend:

Flagg’s appearance shifts between human, demon, and various animals, and it is implied that he has lived many lives in many times; “Flagg” is just the name of his present form. Flagg is described by Tom Cullen as follows: “He looks like anybody you see on the street. But when he grins, birds fall dead off telephone lines. When he looks at you a certain way, your prostate goes bad and your urine burns. The grass yellows up and dies where he spits. He’s always outside. He came out of time. He doesn’t know himself.”

3. Shai Hulud. They say terror is just a layer removed from awe, and it’s hard to imagine a creature from the literature of the fantastic more awe-inspiring than the sandworms of Frank Herbert’s Dune series. These immense, indestructible, nigh immortal creatures that are the source of the substance that allows interstellar travel are worshiped as gods. Again from Wikipedia:

Sandworms are animals similar in appearance to colossal terrestrial annelids and in other ways to the sea lamprey. They are cylindrical creatures with no significant appendages, equipped with a fearsome array of crystalline teeth, used primarily for rasping rocks and sand, and more than capable of eating anything imaginable. During his first close encounter with a sandworm in Dune, Paul Atreides notes, “Its mouth was some eighty meters in diameter … crystal teeth with the curved shape of crysknives glinting around the rim …

The sandworms can boast one thing that no other monster can lay claim to: they inspired the most memorable line in a music video starring Christopher Walken. 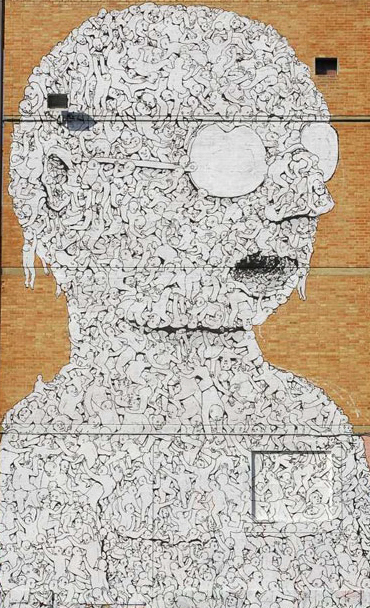 4.) Popolac and Podujevo. One might argue that Clive Barker’s infamous short story “In the Hills, the Cities,” from his World Fantasy Award-winning collection The Books of Blood, probes the raw cavity of disturbing abomination rather than the electric shudder of fear, but regardless, the story’s monstrosities — 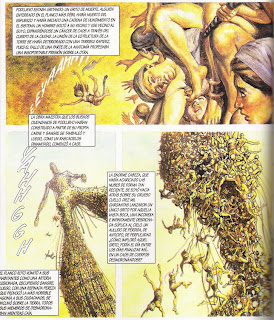 a pair of cities in a mythical, isolated Polish country- side that engage in a ritual battle in which the entire populaces rope themselves together into towering giants — have a way of lingering long in the imagination.

And when one of these beings abruptly meets its “death,” the result is one of the most gruesomely memorable occurrences in modern horror literature.

5.) [Bonus Tie] The Irrha and the Cauldron-Born. One is from Tad Williams’ series The War of the Flowers. The other, from Lloyd Alexander’s The Chronicles of Prydain. One was mentioned in the responses to my original post, the other wasn’t. Both are unstoppable, unkillable, and nothing you’d want to meet in broad daylight, much less a dark alley. One I can find no illustration for of any kind, but I can find this delightfully creepy summation from Television Tropes & Idioms:

The Irrha from Tad Williams’ The War of the Flowers, a mindless disease spirit that someone sends to kidnap the main character. It follows him everywhere, even between dimensions, constructing a new body from whatever’s handy (trash, stray cats, parts of a homeless guy, whatever).

The other I can find illustrations for, specifically from the animated film adaptation of The Black Cauldron.

Special Additional Bonus Monster: The Judge. Want a character that’s really awe-inspiring, scary and just plain wicked all-in-one? The Judge is to Cormac McCarthy’s Blood Meridian what Randall Flagg is to The Stand. And though McCarthy’s surreal and ultra-violent revisionist Western is generally not on anyone’s list when the topic of monsters in fantasy literature crops up, it probably should be. Judge Holden is based, supposedly, on a real person, intelligent, well-spoken, physically enormous, the most ruthless of the gang of bloodthirsty scalp hunters that roamed the Old West with John Joel Glanton in the mid-1800s. In McCarthy’s novel Holden becomes something more, a figure who appears in the middle of the desert with a rifle that has the Latin phrase “Et in Arcadia ego” inscribed on the stock, who murders and molests children yet possesses an eerie, erudite charisma, and who, it’s hinted, may be both invulnerable and immortal. Literary critic Harold Bloom dubbed The Judge “the most frightening figure in all of American literature.” Perhaps Mr. Bloom needs to read more horror before he can make such an outsized declaration and call it informed opinion — but there’s no question The Judge is an evil that can’t be ignored.

And so now we’re at the end, and surely you monster lovers are wondering, “Is that all there is? Where are the fearsome things of high fantasy we were promised?”

Worry not, little morsels. Thanks to the efforts of a true scholar of the fantastically monstrous, the feast you hunger for is coming. Oh, yes, very soon. Keep an eye, whichever you have left once I’m done with you, on this space.

Blood Meridian is epic. Just my interpretation, but I became convinced that the Judge is the biblical Cain.

David, that’s a fascinating interpretation. That would seem to fit within McCarthy’s milieu…

And I’ve heard from a few folks that The Judge is a truly horrific villain… time for me to check out Blood Meridian, I think.

I recommend Blood Meridian most highly. I will say be prepared for some dream logic to take precedence in how some things proceed.

Thank goodness you’re on my side, Chevalier. Not that it will spare me in the End of Days, but at least I might last until dessert.

have you read the psycological and sometimes very graphic horror Dead in the water by Nancy Holder? I have recently read it and it even produced me nightmares, I don’t want to spoil the novel but the entity controlling the ship of horrors is very interesting
by the way I can’t with the style of Meridian of blood I tried but I can’t even read half of the book

I haven’t read Dead in the Water but I’ve certainly heard of it. Thanks for the tip!

and what about the little statue of Perse in Stephen King best book since Pet sematary, 1983, Duma Key?

I haven’t Read Duma Key. King runs hot and cold for me. So you say that novel’s good?

as I said is his best novel since the first eighties, great psycological horror and a great character study, the setting Florida is very interesting for a King novel, maybe the weakest point in the book is the so conventional ending something common in King by the way
very recommended

[…] I ranted and rave in the previous installment of this monstrous undertaking about how all the mere morsels who responded to my first post in the the series did little to address my actual question — which was, who are the great monster of modern heroic fantasy? What crevasses do they haunt, what lonely paths do they prowl? […]

[…] do you get when you take Monster Blogger Mike Allen, a dark spark of poetic genesis, two fellow Rhysling Award winners, Sonya Taaffe and […]

[…] folks! Mike Allen here. When I last came through, I blogged about monsters. I want to thank Black Gate overlord John O’Neill for granting me leave to return to […]

[…] generously invited me to talk about where my creatures came from, in the spirit of the Monstrous Posts on Monsters series I wrote many moons ago for all you denizens of the […]