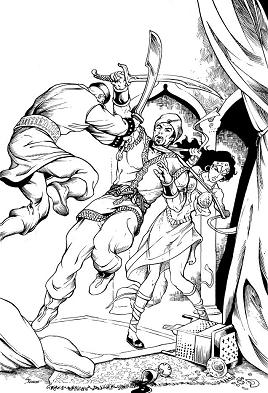 In late July of 2009 I got an offer for a historical fantasy novel from St. Martin’s imprint Thomas Dunne featuring my series characters, Dabir and Asim.

The deal itself reads anti-climatically, which is why I delayed posting about it. But I think that there’s something to be learned from the story of publication, so I’ve decided to share it.

I finished revising a book, I gave it to a friend, he showed it to his editor, I got an offer, I talked to agents of two writer friends, agonized about which agent to select, then chose one.

Boiled down, the process sounds simple; after all, I’m just one of those lucky guys who wrote a novel and showed it to a friend, then got a book deal after just a few weeks from the first pro who looked at it. Easy as pie, right?

This account of events manages to miss a couple of things.

The deal happened fast – if you leave off the year of drafting, and that I knew the characters of the novel so well because I’d been writing short stories about them for nine years. Then there’s the fact that before this book deal are twenty preceding years of sending other novels out to publishers and agents and collecting rejections… I honestly am not sure how many novels I’ve written before this. Sometimes they’d been rewritten so many times that each draft was a completely different animal (and one that still got rejected). It’s taken me a lot longer to get here than I would have liked, but I have to say, I appreciate it far much more than I would have if I’d just fallen into it. Apparently I’m not a fast learner, but I am really stubborn.

Nor should anyone reading my story gloss over the importance of friends. I didn’t just happen to have a friend, Scott Oden, who had multiple book deals, an editor, and an agent. It’s not as though Scott’s my next door neighbor. Scott gives a fine accounting of how we became friends here and it’s illustrative of an important point. Writers should not be islands unto themselves – they should reach out to kindred spirits. If I had remained in my writerly cave, I would not have a book deal.

When I appear in an anthology I try to read the work of the other authors, and if I find like-minded spirits, I drop them a line. I do the same if I’m reading some reviews I like, or a novel I like. I write the author an e-mail. Sometimes they don’t respond. Sometimes they do and we exchange a few cordial notes. Sometimes we become occasional pen pals, and sometimes there is so much commonality we become friends.

Someone once accused me of running a deliberate campaign to promote myself, but I’m not that mercenary, and no one I’ve become friends with this way is stupid enough to be tricked by a social climber pretending to be their pal. While I’m basically an introvert, I’m pretty social for a writer, and I get lonely. Writing, hell, I guess any art I can think of, is a lonely business. When I see someone doing something I admire, I want to reach out and tell them, and maybe pick their brain a little. It’s good to exchange notes with other writers. How do they go about it? How do they wrestle with the demons, meet their deadlines, get so many words a day? What writers inspire them? How did they learn about this trick or that… you get the idea. And since I write sword-and-sorcery or heroic fiction or, at the least, stories with adventure, when I first started seeing print it was hard to find other short fiction writers with a similar aesthetic because so few magazines were open to that kind of thing. I wanted to meet other people who were as into this kind of thing as I was. As a result, some of my dearest friends today are people I met because I wanted to compare notes with like-minded folks.

In short, or in long, then, the lesson I didn’t understand I was learning as I was living it is this: become part of the community if you want to become part of the industry. Read the authors and reviewers and reach out to people you respect, or with whom you feel a kindred spirit. And keep writing.

(Art by Storn Cook for “Sight of Vengeance,” Black Gate 12)

So very true, Howard. I’ve been going to comic conventions and networking with folks in that industry for years, but it wasn’t until the 2009 WORLD FANTASY CONVENTION–my first ever–that I discovered the awesome community of writers that exists in connection with this legendary convention. Not only did I meet some of my literary heroes, but I made friends with lots of writers and discovered some new favorites. It was a life-changing experience. I’d say I got more out of one WORLD FANTASY CONVENTION than I got out of 10 years of comics conventions. Afterall, I’m a writer, not an artist. Sure, I’ll keep working in the comics field as opportunities arise…but the WFC was a shot of creative adrenaline for me that reminded me I’m a writer and I need to first-and-foremost WRITE. And it plugged me into a fantastic community of the most creative individuals I could every imagine. I can’t wait for the 2010 convention…even though it’s all the way across the country in Ohio, I know it will be worth the trip.
Hope to see you there, man!

I’d say your story is not so much a “you gotta know somebody” proof as it is a “you gotta take a lot of at-bats to hit one into the stands.”

Not that networking isn’t vital.

Like John and Howard above, I tried and failed in selling both short fiction and novels. Kept trying, kept failing. I did my professional due diligence; I learned the imprints and the players; I went to cons — eventually with a novel in hand I met an agent at WFC (2001 Montreal) and for once things clicked. If you’re serious about the biz, you need to try to get to a WFC or two.

(I’ll be there in Ohio this year as well)

I didn’t know you were at the WFC in Montreal. That was a very strange con! Barely a month after 9/11, and no one was flying… the plane I took from Chicago to Montreal was virtually empty. The con itself had to be the smallest World Fantasy I’d ever attended, barely a few hundred people.

I’m sure we must have run into each other. Were you the guy I hit up for $5 in the food line? 🙂

I remember having a nice talk with Ellen too. I think it was about Star Trek(?!)

Fred Saberhagen and I hit it off, which I found really cool, because his Berserker series was the first SF I read after Doc Smith’s Lensman/Skylark books.

I also shoehorned myself onto some panels, which is funny, because when I go to WFC now I never want to be on panels as it takes away from bar time.

I’m still learning the networking thing. I’ve only been to a few local cons so far, though I’m planning to attend World Fantasy this year. I find these sorts of stories encouraging and daunting both, as I’m pretty introverted. But, hey, so are a lot of writers, so I figure I can still manage.

[…] Last week I wrote about obtaining my first book deal. Over the next few months I thought I’d talk from time to time about what happens next. As the point of my first essay was mostly about the importance of contacts (and in working steadily and not giving up), I mentioned some things in passing that I thought I’d cover in more detail. For instance, how did I get the offer? By air mail? Phone call? Candygram? […]

[…] has discussed the fascinating details of selling his novel here on the Black Gate blog (”How to Get a Book Deal“). We’ll publish an excerpt from the novel in our next issue, Black Gate 15. But for […]

[…] that had been a kind of holy grail for me: obtaining a book deal with a major publisher. That first essay is about the power of making connections; the second concerns itself more with the specifics of my own novel contract. In this third essay […]

[…] You’ve written some excellent essays regarding your journey to publication, “How to Get a Book Deal,” “Signing the Contract,” and “After the Book Deal.” In “Signing the […]