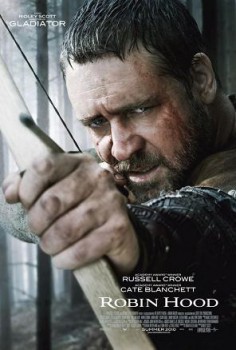 For the past three decades, versions of the Robin Hood legend have followed an unwritten maxim that they must be dark, realistic, epic, and not a touch of fun. It’s as if artists have done all they can to avoid looking or acting like the 1938 Michael Curtiz-Errol Flynn movie The Adventures of Robin Hood.

By St. George, why? Why wouldn’t you want to catch some of the glory of one of the most beloved adventure stories ever put on film? I don’t think it’s exaggerating to say that The Adventures of Robin Hood is the most successful and important version of the Robin Hood legend in the entire seven-plus centuries that it’s been in existence. Who is Robin Hood? He’s Errol Flynn. Nothing will ever change that.

I’m fine with somebody trying, however. But I wish one of those somebodies would recall the thrill of Flynn and Curtiz and not fear it. (I think they’re afraid of green tights. Fine, make ‘em gray. Get over the stupid “tights obsession” already!) They should also consider well the old lays that made Robin Hood both a hero and a humorous trickster figure. This is what I want to see, and I’d wager it’s what most audiences want to see as well. Rob from the rich, give to the poor, make rich buffoons look even buffoonier, and wield the sharpest-shooting bow and arrow in the kingdom. Not much to ask for, really.

Ridley Scott’s Robin Hood ‘10 is yet another Robin Hood movie that piles on grim, tight-jawed realism and an enormous England-shattering plot—and isn’t any fun. In this specific case, I think what happened wasn’t so much an attempt to avoid the classic Robin Hood story as it is a film that fell into the trap of the current “reboot-and-origin” mania. Scott’s Robin Hood isn’t a movie about Robin Hood at all. That character, in the forest of Sherwood with his troop of altruistic robber-rebels resisting Prince John and the Sheriff of Nottingham with bow-n-blade action, only appears in the last few minutes of the movie as a coda.

Not only do director Ridley Scott and screenwriter Brian Helgeland fall into the “origin story” snare, they also try too hard to imitate the battle epics of Ridley Scott’s recent past: Gladiator and Kingdom of Heaven. Both those earlier movies are amazing historical epics . . . but applying this style to Robin Hood means that Robin Hood essentially has to get replaced.

The result is a well-crafted historical spectacle made about the wrong character, which ultimately means it’s denuded of drama despite all the medieval action occurring in it. Imagine watching a Superman film that spends almost its entire time on the planet Krypton with Cal-El as a baby, and the whole plot concerns the Kryptonians fighting off an invasion from another planet. In the last two minutes, the planet finally blows up and Cal-El takes off for Earth as a voiceover explains that there he will one day become the hero Superman and fight for Truth, Justice, and the American Way. That’s what the new Robin Hood is.

At the beginning of the film, there’s some promise for an interesting approach to the classic legend, akin to The Return of Martin Guerre. Robin Longstride (Russell Crowe) is an archer in King Richard’s army wending its way back across Europe after years on crusade. When the king (Danny Huston) dies suddenly during an assault on a castle, Robin and his partners make a quick escape to return home. On the way, they cross an ambush meant originally to kill the king, and Robin receives a request from a dying Robert of Loxley to take the man’s sword back to his manor in Nottingham and deliver it to his father. Robin Longstride thus takes on the identity of Sir Robert Loxley and returns to England where he continues to illegally use Loxley’s identity to help the man’s father (Max Van Sydow) and his widow Lady Marion (Cate Blanchett) keep their land from cruel taxation.

This “identity switch” probably comes from the original script, Nottingham, that started this Robin Hood on its way toward production. At first, it was the story of a heroic Sheriff of Nottingham, and then changed into the fascinating high concept that Robin was both Robin Hood and the Sheriff. Maybe this was too far-out for audiences, but the replacement of Robin pretending to be a landowner and then siding with the people against Prince John (now King John, a major change from the legend) and his tax collectors is a solid one.

But all the other events surrounding this first half-hour development of Robin’s character are what eventually take over the movie and keep Robin and his Merry Men from actually doing what we want them to do. There’s a moment in Nottingham when Robin and his hooded compatriots rob a wagon carrying grain stolen from the town; this is the only instance of “rob from the rich and give to poor” in the whole film. It’s also a great one, with a zinger of a line and a sense of style. And, again, it’s the only time this happens.

What’s the rest of the movie about? It’s about how Robin Hood develops the Magna Carta and repulses a French invasion on the beaches of England. Swear on the Domesday Book, that’s what actually happens. It turns out that Robin Longstride’s father wasn’t only a stoneworker, he was also John Stuart Mill or John Locke or Karl Marx or something, and he drafted the first version of the Magna Carta to introduce Popular Rule to the Kingdom of England. When the barons of the north start to rise against King John, Robin delivers the Magna Carta to him as a way of unifying the nation against the coming invasion of Phillip II of France. I can’t believe I’m writing this, but that’s the film I saw. 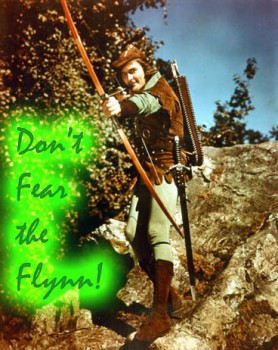 Inaccuracies in historical films don’t grate on me much, provided the filmmakers don’t expect me to believe that it’s the truth and are instead using fiction to create good drama. Is there anyone who thinks that the events in Inglourious Basterds reflect how World War II actually ended? (If so, get back to school.) Closer to home, Gladiator ditches the real death of Commodus entirely for an imaginary restoration of the Roman Republic, but the film is just telling a fantasy story, and a bloody damned good one at that. But what Robin Hood does with history isn’t bothersome because it is wildly inaccurate; it’s bothersome because it’s outlandish and has nothing to do with Robin Hood.

This bizarre Magna Carta and French invasion angle also derive from what I term the “Epic Fallacy” of contemporary film: the old legends will only appeal to modern audiences if their stories are exploded up to ginormous scope. Therefore, Robin Hood can’t engage in a bush war with the forces of corrupt and unjust laws, he’s got to save all of England from a French invasion, like a second coming of King Arthur. Kevin Costner’s Robin Hood: Prince of Thieves made the same mistake, with the Sheriff of Nottingham morphed into a James Bond villain planning to take over the whole country.

I sense that Ridley Scott, a director who swings between brilliance and tedium as he goes from project to project, is here simply protecting his “brand,” as well as the brand of Russell Crowe. The director knows what people expect of a Scott-Crowe flick, and tries to deliver. The story he had to tell ended up sacrificed to the brand, unfortunately. It’s better than A Good Year, at least. That could have used a French invasion to keep people awake.

The medieval action in Robin Hood is finely mounted, but the beautiful carnage of Gladiator and Kingdom of Heaven starts to feel tired here and literally stuck in the mud. It’s the same sort of battle scenes we’ve seen before, and nothing about them feel special any more. A few strange action shots get in that feel like attempts to “fun up” the fights, but there’s not enough of this for it to work and it instead feels jarring.

Ridley Scott’s films always look good and have strong casts, and Robin Hood is no exception. If only the actors were enjoying their jobs more! Crowe is too old for the part, as is Blanchett, and they both seem loggy and bored. The Merry Men of Alan-a-Dale, Will Scarlett, and Little John have scant to do. The script occasionally lobs them a funny line, and then backs away as fast as possible as if embarrassed for lightening the mood. Mark Addy as the bee-keeping Friar Tuck gets away with the best moments; I could deal with more of him and fewer scenes of invasion-plotting and royal conspiracies and William Hurt picking up a paycheck.

Mark Strong, most recently seen in a knock-down fight with an eleven-year-old girl in Kick-Ass, gets the best part of all as Sir Godfrey, the true villain. (The Sheriff is inconsequential, another disappointment.) Playing an English traitor who’s helping Phillip of France in his plan to conquer England, Strong is a melodramatic baddie in a film that needs the scenery-chewing.

Finally, I would have enjoyed seeing more “bow-and-arrow” in my Robin Hood film. In an early siege sequence, Russell Crowe sends quite a few bolts a’ flying to puncture Frenchmen, but then the film forgets that the bow is his calling card. During the huge “Inverse Storming of Normandy” finale, when Robin is swinging an axe at French knights in the crashing surf while landing ships are cracking up around them, I thought, “So this is a Robin Hood film, huh?” That’s probably not the kind of thought a movie called Robin Hood should put in the mind of a viewer.

Ryan, to my mind this was really one of your best pieces.
It’s refreshing to read actual observant criticism when so many “reviews” on the web simply cheer about the subject or slag it off. I feel like I know exactly why you felt as you did about this film.
And I know why I don’t need to see it.
Thanks.

This was such a fine review that I actually read it twice.

Your summary confirmed everything my wife and I were concerned about when we saw the previews.

I’m a big fan of blood and thunder, but, really, it’s wrong, tonally, for Robin Hood. I hope we don’t have to wait another 20 years for someone to try again.

[…] instead of the academic author, I’m the movie review joker who likes musing over the mistakes of bad Robin Hood movies, rejoicing geekily over the greatest Dracula flick ever, telling you how much he loves Captain […]