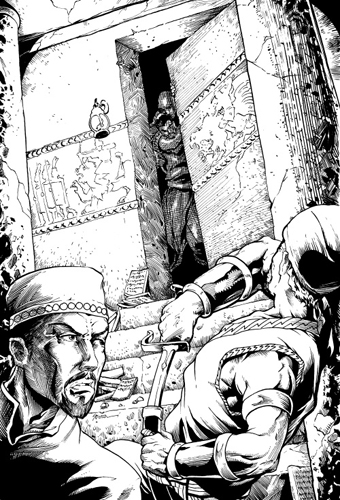 Last week I wrote about obtaining my first book deal. Over the next few months I thought I’d talk from time to time about what happens next.

As the point of my first essay was mostly about the importance of contacts (and in working steadily and not giving up), I mentioned some things in passing that I thought I’d cover in more detail. For instance, how did I get the offer? By air mail? Phone call? Candygram?

My friend Scott Oden had submitted my manuscript to his editor at Thomas Dunne Books, Pete Wolverton. A little over three weeks later, I received an e-mail from Pete asking me to give him a call at my convenience.

When I’d sent previous novels to other publishers, at best I had only ever received pleasant e-mail rejections, or, in olden times, a letter. Sometimes my novels had just disappeared, with nary a response at all. I had never received a request to call, and with Sherlockian-like deductive reasoning figured that was a promising sign.

I deliberately slowed down, made myself a cup of tea, and took my time drinking it. About twenty minutes later I dialed the number Pete had provided.

I found myself on the phone with a bright, friendly professional who’d enjoyed my book and wanted to talk about it, and to talk to me to get a sense of who I was… and to discuss a book offer.

My friend Eric Knight had long ago let me know that in this industry two book deals are often preferred, so I made sure to tell Pete a sequel novel was already outlined. Eric’s advice proved as sound as usual – Pete was interested in hearing about a second book.

I signed on with literary agent Bob Mecoy, who took over negotiations with Thomas Dunne Books, and helped steer me through the whole synopsis process. Naturally I needed a synopsis of the second book before anyone wanted to buy it. Following on Bob’s advice, and advice from my circle of readers (I leaned especially hard on my long-suffering wife) I put a synopsis together. Pete liked it, and the one book deal became two.

This was August of ‘09. I didn’t go public with the good news until after some three months of paperwork and negotiations over small but important things, which really hammered home to me how useful it was to have a good agent. I didn’t announce the deal at large, though, until I’d put pen to paper. There’s an interesting thing about that pen: Eric Knight had picked it up for me two years ago after I’d experienced another spate of novel rejections. He knew I was down and told me to save it to use when I signed a novel contract. He was sure it was going to happen, which furthers my argument that Eric knows what he’s talking about, and evidence to the world at large that he’s a great friend.

Contrary to some popular misconceptions, after signing in triplicate I was not the recipient of a sports car or a chest of pirate gold. What I received after another month of processing was the first of three payments – one issued upon signing the contract, one to be issued on turning over the edited manuscript, and the third to be issued on turning in the rough of the second book. There are, indeed, a very, very small number of authors who receive huge first book deals. Mine was respectable, but did not approach those amounts. Most writers do not “make it” with the first book deal, and like most what I got was the chance to get my career started. If the first books sell, then I’ll hopefully be able to negotiate for more money with the next contract, and hopefully they’ll stay in print so I can continue to collect royalties.

I’ll catch you up on the next stages over the coming months. The first of the two books is still about 11 months out from appearing on bookstore shelves. Even though I’ve gone through the editorial passes of book 1, I have a lot still to do between now and then.

Thanks for the fascinating peek behind-the-scenes. Publishing always moves at a glacial pace, eh? Some things never change.

[…] a book deal with a major publisher. That first essay is about the power of making connections; the second concerns itself more with the specifics of my own novel contract. In this third essay I thought I’d talk a little about what happened once the book contract […]