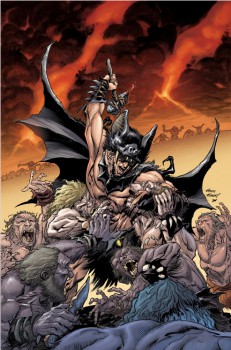 After reading the Batman/Doc Savage Special, I didn’t imagine I would return to pick up any monthly Batman comics—or any monthly comics—for a span. I’m a trade paperback fellow who follows news of monthlies so I know what to buy in larger bound form when it reaches the bookstores.

Then I saw the sneak of the cover for issue #2 of the limited series Batman: The Return of Bruce Wayne. And I screamed “Solomon Kane!” and rushed to find out what writer Grant Morrison was doing with this series. I learned that he was going to give me six issues of pulpy adoration, with Batman filling in a series of legendary pulp hero roles throughout history: barbarian Stone Age warrior, puritan witch-finder, pirate swashbuckler, and hard-boiled P.I.

Okay, I was on board for this, even though it rises out of the confusing mess of recent crossovers and events in the DC Universe, a mix-up that has alienated a lot of Bat-fans.

The events leading up to The Return of Bruce Wayne come from Grant Morrison’s run as writer on the monthly Batman comic and on the massive DC Universe event Final Crisis. Morrison is either a genius or a madman, probably both, and his time with Batman has seen developments that absolutely stagger the mind. The guy brought back Bat-Mite, for cryin’ out loud! Other crazy things he’s done: give Bruce Wayne a son with Talia; suggested that Bruce’s father, Thomas Wayne, faked his own death and is still alive; created a league of international Batman-and-Robin imitators; put Batman up against an adversary who might be the devil himself; and included “the Batman of Zur-En-Arrh” from some nutball 1961 story where Batman discovers a colorful version of himself on another planet.

And the amazing thing about all this? It works. Morrison is maniacal, but he layers on so much dementia that it is impossible not to ride along with it, even if half the time while I was reading it I was thinking “Huh?” That was fine, because the other half of the time I was thinking, “Whoa, cool!” . . . usually right after thinking, “Huh?”

What Morrison does that I appreciate is that his Batman embraces all aspects of the character’s history, not merely the darker recent years. Morrison is quite happy to include the 1960s TV show and the strange “aliens and ray-gun” years of the 1950s. Reading his Batman run is akin to getting a pop-culture history ride, all the more reason I was excited to see him run Bruce Wayne through a series of pulp portraits in different time periods. Morrison knows his genre history, and I was eager to see him play around with hero types rarely seen in modern comics.

So what is Bruce Wayne/Batman doing back in the Pleistocene, which is a bit out of his Gotham jurisdiction? I don’t have the space for a full answer (well I do, but you wouldn’t read it), and trying to work through this whole history would fry all my neural circuits. But here’s an abbreviated version, both in- and out- of “Universe.”

In Batman R.I.P. Bruce Wayne appeared to die in a helicopter crash after a protracted fight against an organization called the Black Glove, which was trying to drive him over the edge. (The Black Glove’s leader, Dr. Simon Hurt, is the one who claims he’s actually Thomas Wayne, but Batman denies this . . . and I don’t have any idea if it’s true or not and honestly think that Morrison is simply playing tiddlywinks with my brain.) Although Batman seemed dead to the world because of this accident, he did survive it . . . only to perish immediately after in the pages of Final Crisis #6 and #7, where cosmic villain Darkseid annihilated Bats with an energy ray.

However, Darkseid didn’t actually kill Batman: he used the “Omega Sanction” to send Bruce Wayne back in time, turning him into a caveman who sketches a bat symbol on a cavern wall as Final Crisis closes.

The various Batman comics continued after this, with different members of the “Batman Family” dealing with Bruce’s apparent death in different ways. Dick Grayson, the original Robin, took up the cape and cowl, with Batman’s “son” Damien as his Robin, and the previous Robin, Tim Drake, outfitted himself as “Red Robin” and searched for evidence of Bruce’s survival. But everybody reading the comics knew Bruce would come back, it was only a matter of time. Quite literally. And with The Return of Bruce Wayne, Batman finally starts the climb up through history to get back to his own title. 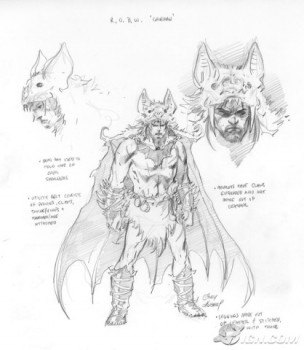 Now, I’ll banish all this Final Crisis and Batman R.I.P. confusion and look purely at issue #1 and Batman, the Savage Warrior.

Oh wait . . . I can’t totally ignore Final Crisis, since at the start of the issue there are references to it that immediately raise questions. Why is Bruce Wayne in the Stone Age via a rocket ship? Who’s this old man dying in the cave who apparently brought fire to humanity? And later on, why are Superman, Green Lantern, and Booster Gold hunting for Wayne?

Thankfully, although I know the answers to these questions, nobody else reading the issues needs to know them to enjoy the comic. You’ll shrug at a few things, but “Man-of-Bats” in battle against Savage (a.k.a. the immortal villain Vandal Savage) and the Blood Mob tribe is a nice self-contained piece of barbarian action in the model of Robert E. Howard’s “Spear and Fang,” Manly Wade Wellman’s “Hok,” and the movie One Million Years B.C.

Wayne doesn’t speak any comprehensible English as he emerges from his cave gripping his utility belt and walks among a local tribe, the Deer Warriors, who believe he may be a god. It’s hard to tell what Wayne remembers about his life, since he’s viewed at this time strictly from the outside, with his language a mystery to the Deer Warriors.

Suddenly, the enemy tribe the Blood Mob, led by the braggart Chief Savage, viciously attack and slaughter most of the Deer Warriors. As a trophy they carry off the “man-god” and stake him to the ground for a ritual sacrifice.

But Batman’s destiny surfaces even in this time thousands of years before the present, like a Jungian archetype swimming through the streams of history to latch onto him. A boy from the Deer Warriors (known only as “Boy”) who survived the attack comes to free “Man-of-Bats,” carrying a shield with the bat-emblem on it and wearing paint on his eyes in a very familiar domino-mask pattern. Once freed, “Man-of-Bats” dons the skin of a giant bat-beast that Chief Savage keeps as a trophy of another of his victories, and then he and Boy lay down the serious hurt. (His recovered utility belts comes in handy as well.)

Neither Morrison nor artist Chris Sprouse do anything unusual or unique with this setting. I’m sure they didn’t want to. This is unapologetically a “caveman yarn” that looks no different from a 1960s movie or comic book in style, dress, weaponry, and dialogue. And I like that. Morrison isn’t trying to invent the wheel here (as it hasn’t been invented yet, this seems the appropriate phrase) but instead give readers a taste of the fun of a different era of storytelling.

Each issue of The Return of Bruce Wayne will have a different artist, picked to capture the specific period. Chris Sprouse was definitely the right choice here; his art is clean and brisk, and much brighter than most artwork on Batman titles. It’s almost comic-book primitive.

As a single issue, Batman: The Return of Bruce Wayne #1 is an enjoyable piece of old-time adventure. But clearly, it’s planning to get even better. In the final panel, J. R. R. Tolkien’s Watcher in the Water rears up to attack a shirtless Bruce Wayne holding a broadsword and striking a very Conan-esque pose while a lady distress in a puritan outfit stands behind him. Yeah, I’m coming back for more.