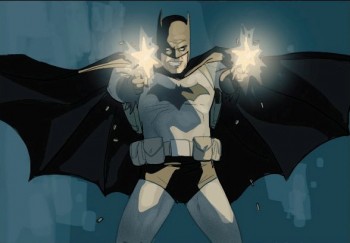 I am going to semi-repeat myself in my next two Black Gate posts, going over graphic novel versions of material that I’ve discussed over the past few months.

First up, and the more immediately timely subject because it just hit the newsstands on November 11, is DC Comic’s Batman/Doc Savage Special #1, a one-shot designed to set up a new alternate universe called The First Wave. As I posted before, this is one of few mainstream superhero comic ideas that to really excite me over the past two years, since it would re-imagine the modern comic heroes into the world of 1930s pulp. No super-powers, no aliens, just guns and gadgets . . . plus the re-appearance onto the comics pages of the some of the classic figures of the pulps.

When I bought Batman/Doc Savage Special #1 at my local comic book store, it was the first time I had bought a “monthly” mag in a few years. Usually, I wait to purchase trade paperbacks, but this was a must-have. There was no way I could wait until this got collected with the issues of the upcoming regular First Wave series, which doesn’t start until March. And, unfortunately, Batman/Doc Savage Special was over all too quickly. Another reason I usually don’t buy monthlies and wait for the book publication.

Before getting onto what I love about the work of author Brian Azzarello and artist Phil Noto in this one-shot, I have to make two complaints.

First . . . not thirties enough for me. In the lead up to this issue, the marketing had given me the sense that the setting would be fully retro-1930s, and the cover artwork by J. G. Jones seemed to indicate this. But the The First Wave universe has cell phones and television and mostly modern dress, with a few bits of spice from the Great Pulp Decade, like Doc Savage’s jodhpurs and the somewhat more quaint mob operations. I really wanted a full art-deco assault from my favorite fashion time-period. This is admittedly a fetish of mine, and won’t likely bother other readers.

Second . . . dammit, this is all? Just one slightly longer comic book issue? I have to wait until March for more? I’m ready now! Okay, that’s a positive complaint, but when I saw the word “END” over the panel of the Batman swinging away from a rooftop as Doc Savage watches him (“Leave Gotham to me . . . you save the world.”) I felt angry. No, don’t stop now!

Maybe I should have waited for the trade paperback. 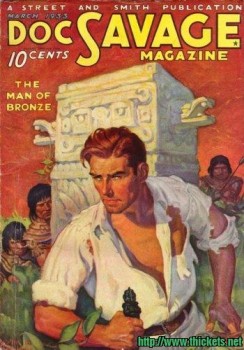 There is not much “story” in this issue, since it’s a teaser and a pilot episode to set the tone for the upcoming series, and shows how the two protagonists, masked dark avenger the Batman and public celebrity and hero Clark “Doc” Savage, first meet and compare methods. As a character examination and an exercise in style, it delivers. Azzarello has Lester Dent’s Doc Savage fairly well-nailed, and his version of The Batman/Bruce Wayne is an exciting new view that breaks away from many of the conventions of the character. This is a rougher version of the character than seen in years, and he’s cocky and overconfident. His Bruce Wayne persona doesn’t seem like an act, either—Wayne appears to enjoy his young-womanizer lifestyle outside of the cowl.

The tale begins with the Batman in full “Shadow Mode,” firing his twin automatics along with the caption I know I can make the world better. Modern Batman, and Batman since the early 1940s, has always put himself in the “no-kill” zone of heroes, and would never use firearms, but the early Bob Kane-Bill Finger version did use guns—and I must admit it’s a visceral kick to watch him sling lead.

The Batman is investigating the murder of Dan Dowd, supposedly a producer of “stag flicks” (and that puts us right in the Raymond Chandler-style of L.A. crime scene). However, to the public, and to Doc Savage, who travels to Gotham City on the West Coast to see if this Bat Character poses a public menace, it appears as if the Batman is responsible for Dowd’s murder.

Who murdered Dowd, and his connection to a villainous group called the Golden Tree, are elements that Azzarello is prepping for later issues in the series. For the moment, the story centers on the first clash between the Batman and Doc Savage—a brutal draw—and Savage’s detective work shows that the Batman did not kill Dowd . . . and must have a burning quest of his own for justice.

Gotham is usually presented as a version of New York City (or, in the recent Christopher Nolan movies, Chicago), but New York City exists here as Doc Savage’s city, as it is in Lester Dent’s novels. This turns Gotham City into . . . Los Angeles! Phil Noto’s artwork leaves no doubt that Gotham is now noir Capital U.S.A., filled with Hollywood glitz and payola police sleaze. Wayne Manor is now a Mediterranean villa overlooking the Pacific. It’s a remarkable change from the city of the Mainstream DC Universe, but the noir version of Los Angeles is a perfect place for this rendition of Batman; its Raymond Chandler view of law-and-disorder are also an ideal venue to confound the sensibilities of Doc Savage. As police Captain Raleigh explains: “—things are different here, Savage. Gotham’s not New York. Hell—ain’t a day in my life don’t prove Gotham’s not anything but Gotham.”

(And, on a personal level, it’s a thrill to have the Batman kicking around my town.) 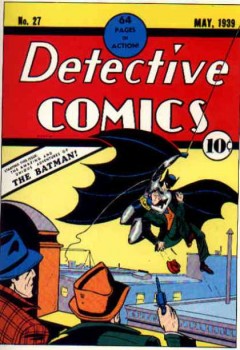 Although Doc Savage and the Batman are night-and-day opposites in their operations (“Good men don’t wear masks,” Doc observes) they do have a similarity in their quests. Both are the rich sons of rich men, and their fathers’ deaths are prime motivators in their seeking of justice. Readers know well how the murder of Bruce Wayne’s parents galvanized his quest to combat crime. Doc Savage has had the burden purposely placed on him by his father, who had prepped his son to “save the world.” With his father’s recent death, Savage now faces that great responsibility.

A few supporting characters make brief appearances to set up larger roles in the coming series. Only one of Doc Savage’s crew, meat-fisted Renny, shows up, but the rest are alluded to. A handsome and charismatic Jim Gordon shows he approves of both the Batman and Doc Savage. And Alfred is here, of course, no different than he usually is.

Phil Noto’s art uses great swaths of color and angular, simplified designs that give a sense of the Art Deco missing from the actual architecture. His vision of the Batman is good, although I think rougher and more rumpled on purpose—Bruce is new at this job, after all. Noto’s Doc Savage is a perfect rendition of the Bantam Books/Bama rendition of the character. Noto makes the daylight scenes glow with the warmth of the nostalgic, and the night scenes have the right noir sheen. Everyone looks a bit idealized in stylization, but that’s as it should be.

The most interesting parts of the issue are the “Dossier” pages that Azzarello provides at the end, which includes sketches and descriptions of the figures who will take part in The First Wave. Azzarello outlines his plan for a “Batman Arc,” and the roles for The Avenger, The Spirit, all of Doc Savage’s memorable team, a sexy Black Canary, Rima the Jungle Girl, the Blackhawks, and a few hints of the villains . . . including John Sunlight, a famed villain Lester Dent used against Doc Savage. None of Batman’s classic villains appear slated for the series, which is a good choice. (If I had to pick two who might fit the setting, I would select Ra’s al Ghul and a non-costumed Riddler.)

Damn . . . writing this has made me even more eager for get deep into The First Wave. And I have to wait until March, or even longer until the first trade paperback comes out!

[…] reading the Batman/Doc Savage Special, I didn’t imagine I would return to pick up any monthly Batman comics—or any monthly […]