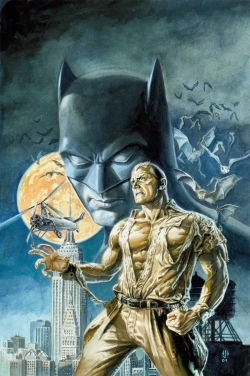 The comic book superhero was born in the late 1930s, during the time when the dominant form of popular culture reading was the pulp magazine. During the next decade, the pulps would start their slow demise: wartime paper shortages that forced the publishers to cut back on the more risky material to focus on the steady sellers, the paperback influx competed on the genre scene and were popular with soldiers overseas, and the rise of the comic book took away much of the younger readers. That the comic book should play such a large part in the end of the pulp magazine industry is an ironic reversal, since the hero pulps fueled the creation of those first four-color superheroes. No Batman without the Shadow. No Superman without Doc Savage.

The comic book industry is now doing some payback to the long-vanished cheap paper fiction magazines. DC Entertainment Inc. has an upcoming project where they are going to let their characters revert back to the 1930s and turn into true pulp heroes once more. It’s an alternate universe version of the DC Universe with no super-powered characters, set firmly in the 1930s. And it will not only feature their own creations like Batman, but also genuine pulp stars Doc Savage and the Avenger, to whom DC owns the comic book rights. The first publication in the new setting is next month’s Batman/Doc Savage Special, written by Brian Azzarello and illustrated by Phil Noto.

That’s all you need to get my blood a’ rushing. I rarely buy DC or Marvel monthly comics, since I think their indulgence in crossover mega-events has reached a level of mania/boredom, but this… oh, I am all over this in so many ways. Just having Doc Savage back in comics is enough, but Batman is also going to get pulled back to the decade of his nativity. I love comic book superheroes (Batman in particular), but since my mid-twenties I’ve turned more toward the pulp characters (The Shadow in particular), and seeing them get a whole corner of the universe of one of the two big comic book publishers is like a five-Red Bull high. And behold the Bama-influenced Doc Savage on the cover!

DC’s own description of the “Pulp DCU”:

Doc Savage returns to DC Comics… and comes face-to-fist with the Batman! Superstar scribe Brian Azzarello and the breathtaking art of Phil Noto combine to shine the first light on a shadowy new version of the DC Universe, where the thugs run rampant, corruption runs deep, and even heroes can’t be trusted! Doc Savage, the Man of Bronze, hates what he’s heard about the connections between a grisly murder and Gotham City’s violent new vigilante. But the Batman can’t abide do-gooders getting in his way… and his .45 just won’t stay in its holster!

Yes, that’s right: Batman (or “The Bat-Man” as he was first called) has got a gun! And he’s going to use it!

Although the modern Batman is solidly a “no-kill” hero in his ethos, in his early years he had no problem wielding a firearm and letting his adversaries die. That this new Pulp DCU is willing to place the Shadow’s .45 automatics into the Bat-Man’s hands show that the company knows how to do this setting right. It’s a mixture of noir and high adventure, with blazing guns and strange gadgets and masked madmen! And it’s set in Gotham re-interpreted as art-deco era Los Angeles!

From Azzarello’s description over at Comic Book Resources, it sounds as if the relationship between Doc Savage and the emerging hero the Bat-Man will be similar to the Superman-Batman conflict: The Bat-Man uses guns and works from the shadows, while Doc Savage disapproves of such methods and prefers to work as a public figure in the bright light of day.

According to DC, other characters who will appear in the setting are the Spirit, the Avenger (another single-hero pulp character from Street & Smith), Rima the Jungle Girl, Black Canary (the Golden Age version), and Wildcat. I hope the Shadow will also appear—that’s his gyrocopter on the cover—but at this point it seems that the Bat-Man is filling the Shadow’s role. This is appropriate, since the Shadow was a primary influence on Batman’s creation.

Pulp DC begins on November 11th, when the fifty-six page Batman/Doc Savage Special goes on sale. I hope this turns into a long running new setting for DC (ongoing Doc Savage and The Spirit titles are planned) especially since I have so little interest in what occurs in their event-clogged “mainstream” universe, where Bruce Wayne isn’t even currently Batman!

This sounds like a great idea, I’ll definitely check it out (well, when they collect them in graphic novels).

[…] Savage Special #1, a one-shot designed to set up a new alternate universe called The First Wave. As I posted before, this is one of few mainstream superhero comic ideas that to really excite me over the past two […]