A Review by Rich Horton 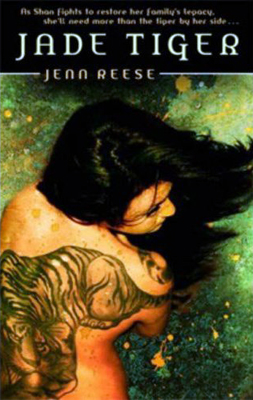 Jade Tiger is Jenn Reese’s first novel. (She has published a number of fine short stories in the past few years.) This is an extremely fast-paced story about a half-Chinese half-American martial artist. The fast pace is both a benefit — it’s a quick, exciting read, hard to put down — and a shortcoming — plot steps and character motivations are kind of glossed over, and the prose is often a bit careless as well, as if the pace of the plot was echoed by the pace of the writing.

Ian Dashell is a Professor of Archaeology at Risley University. One night he encounters an Asian man breaking into the artifacts room and destroying precious objects, apparently at random. The man seems ready to beat Ian to death, but a young woman suddenly invades, saving Ian’s life and preventing the man from stealing his actual desire — a jade crane. The woman is Shan Westfall, whose Chinese mother was part of the Jade Circle, a group of five women martial arts experts. But her mother was killed and several of the jade artifacts — objects of some power — possessed by the Circle were stolen, and Shan returned to the USA with her American father. Now she is running a small martial arts studio — and still searching for the lost artifacts.

It is clear to Shan that the man who nearly killed Ian is a key to tracking down still more artifacts — Shan already has the tiger, and now the crane. And, it turns out, Ian also knows where to find one more of the animals, the dragon. He insists on accompanying her in quest of it, and so does his colleague, Daniel Buckley. And they’re off! Just like that — a breakneck trip to France to track down the dragon. But the bad guys seem to know where they are going, and there is a scary encounter in France, followed by a different kind of scary encounter with Ian’s parents in England. (Ian and Shan, of course, quickly fall for each other.) Then off to an island near Hong Kong, owned by a rich collector with sinister plans of his own.

The action never stops — which, as I have implied, is both good and bad. There is little time for plot logic, and not much more time for character and relationship development. (Though that works OK — Ian and Shan are engaging people, and while I could have used a bit more focus on their developing attraction, it comes off well enough.) There are several scintillating martial arts fights, and some nice plot twists, and lots of danger. I had fun reading Jade Tiger. It’s not a masterpiece, but it shows plenty of promise, and its failings don’t get in the way of its exciting story.

One thought on “Fiction Review: Jade Tiger by Jenn Reese”