Since you’re reading this, you’re presumably interested in reading fantasy (either that or somehow or another this page got linked to somebody’s “Free Tour” button). My guess is that most people take that to mean that you like stories about disenfranchised princesses and questing knight errants in made-up worlds populated by dwarves and sorcerers. Also, no doubt, there must be some universe-shattering struggle between Good and Evil.

Now, don’t get me wrong, I like a big fat trilogy along these lines as much as the next guy. Nor, given that the model for such sagas is steeped in our literary tradition (Shakespeare, to take just one example, wrote about fairies), do I mean to denigrate the genre as a lower artistic life form. It’s just that the term “fantasy” is much broader than sword and sorcery. Indeed, my personal favorite kind of fantasy is rooted in the “real” world, the everyday interactions we all take for granted until something out of the ordinary makes us question what “real” actually means.

That preference probably stems from having grown up devouring Ray Bradbury, whose fiction is grounded in a sense of wonder that is as germane to a man landing on Mars as it is to a 12 year old boy going to a seedy carnival. Indeed, exuberant boyishness is characteristic of virtually all of Ray’s work – it’s what makes it Bradburian. It’s also what empowers him to peer through to the underlying magic hidden by the mundane routines of daily existence.

I was reminded of this after reading Kage Baker’s “Two Old Men” in the March Asimov’s Science Fiction. It’s nice to see Baker stretch out for a change beyond the confines of her Company series (I hope she does it more often), and the result is impressive. A young boy living in a run-down California beach town becomes a messenger between two gents who evidently represent God and Satan. In return for carrying out God’s horrible instructions to his evil counterpart, the boy is rewarded with a fortuitous change in his domestic life, even as the larger life of the nation is in for something much more disruptive. What makes the story work is how well Baker evokes the era of the early 60’s and the dynamics of a small town existing on the margins. Being firmly rooted in that reality, in a way that some of us who were young then easily recognize, makes the fantastical element all the more poignant. I’m even willing to forgive the larger fantasy, that die-hard 60’s liberals still hold onto — the belief that the strife of that era might somehow have been averted had the 35th President lived. 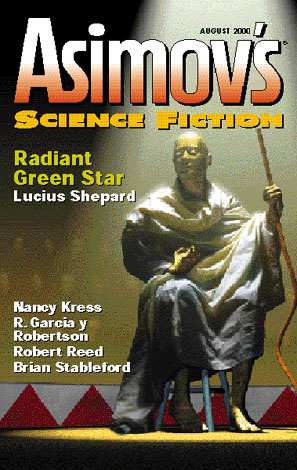 For a highly disturbing view of how childhood may change not for the better, check out “To Cuddle Amy” by Nancy Kress in the August Asimov’s. Kress focuses on every parent’s fear that adolescence will change their loving child into an unrecognizably pierced and tatooed “alien.” While the story seems real enough in the situation and attitude of the characters, there are a couple of subtle hints that something is a bit out of kilter. Unfortunately, this story is less fantasy than it is science fiction in that its horrific ending is technically foreseeable.

If you were dismayed, as I was, of the demise of CRANK!, you’ll be pleased to know that Century has been resurrected after a three year hiatus to help fill some of the void for publishing the wonderfully eccentric and surreal (perhaps not coincidentally, former CRANK! publisher/editor Bryon Cholfin serves as Century‘s graphic designer). Winter 2000 Issue #5 is the first volume to come back from the dead (with a Spring issue already completed to make you think it might actually meet a quarterly publishing schedule) and it’s well worth checking out. To cite just one example, “Heartlines” by Karen Jordan Allen deals with another heartbreaking reality, the mothers demanding an account of their children “disappeared” by repressive South American governments. Allen employs the brilliant metaphor of clotheslines connected around the world that call out the name of the wrongfully imprisoned to muster the support of ordinary women who work for their release. Alas, as the story reminds us, even as some political prisoners are released, the clothesline continues to sing.

As I’m writing this, New York City’s Central Park is being bombarded by pesticides in hopes of averting an outbreak of the mosquito-borne West Nile disease. Some see this as a hysterical reaction to a health threat that pales in comparison to more threatening dangers, just one example being the rising number of deaths from common childhood diseases that could have been avoided by simple inoculation. Kit Reed’s “Precautions” in the August Fantasy and Science Fiction extrapolates how industrialized society is literally scared to death of its biological underpinnings, albeit with some justification, beginning with the parental admonition to a child, “Don’t go near that. You don’t know what’s going on.” The seemingly absurdist fantasy Reed spins at first makes you laugh, and then makes you realize how pertinent it is to the current state of the human condition, in light of some of the germs that destroy that condition.

Reed’s story will also appear in an upcoming theme anthology entitled The Touch, part of the proceeds from which go to an AIDS charity. The reaction to the reality of AIDS is certainly not hysterical; some would argue it is not hysterical enough. Africa in particular is in the throes of health policy debates on how best to contain the spread of the disease. Also in the August F&SF are some variations on this theme. 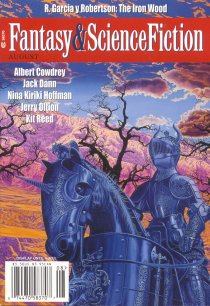 In “Arcadia,” J. R. Dunn provides a parable not only about how the best intentions during a devastating plague can go astray, but about how even those with the best intentions get to the point where they can’t take it anymore. In “Patient Zero” by Tananarive Due, even while you’ll know where the diary of a young boy who inexplicably survives an epidemic is headed, the last paragraph packs a punch that reminds us how we often don’t see the proverbial forest for the trees.

All of these stories share some connection with children, either as protagonists themselves or as casualties of adult actions. A more whimsical viewpoint, provided by Charles M. Saplak’s “Something About a Sunday Night (The Third Alternative, Issue 23), concerns the casualties of a single individual growing up. A middle-aged accountant is enjoying a cigarette on his back porch while his wife and children slumber inside, when he is visited by three former selves – himself as a young man and at the ages of 12 and 6. His visitors find themselves somewhat disappointed about how they are destined to turn out. Although it strays into Jimmy Stewart’s Wonderful Life territory, the story’s bittersweet resolution nevertheless echoes truthfully, at least to those of us who’ve made adult compromises that have made us turn out not quite as expected. What saves the story from being merely maudlin is its sense of place. As in Baker’s piece, we’re firmly connected to the character’s historical milieu (at least for those of us old enough to remember The Ed Sullivan Show) and that sinking feeling we’ve all felt on a late Sunday night that a weekend’s play is ending, and that tomorrow we have to deal with real life again.

Just the sort of thing that we read fantasy to remind us of — not to escape, but to better understand what, like it or not, real life is all about.

All the above magazines have websites of varying richness. Most allow you to subscribe online; all could use your support. If you’re looking for quality fiction, you won’t find a better value — or a higher degree of craft.