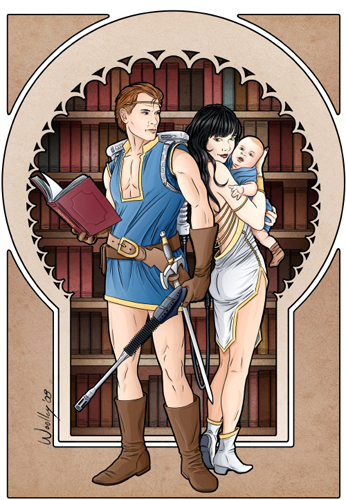 As far as the eye could see, the strange buildings of a novel city stretched away in all directions. These buildings were not the great stone structures of the Golden Age, not the weird metal towers of the Shelks, nor even the mighty plastic edifices of our present world. No, these buildings were a curious hybrid sort that had never existed before and were doomed to be destroyed and forgotten before the generation that dwelled in them was to pass away.

They were the homes of people, built and adapted from the wrecked and fallen Shelk towers of the city that those people had conquered and destroyed. For centuries, these humans had dwelled in the long, underground corridors, and what was more natural, when they came to live upon the Surface, than that they should simulate, as closely as possible, the way of life that was most familiar to them? So the fallen Shelk towers had been dismantled, their huge, metal walls cut up into plates and rebuilt into long, low buildings, about fifteen feet high and as many wide, and anywhere from a hundred yards to half a mile long, the interiors of which resembled closely the corridors with their attendant side apartments.

Some of the largest even had side branches, and the general tendency of orienting the buildings to secure the best possible lighting had brought back what was practically the equivalent of ancient streets.

The people that walked these streets were far different from the ones who, ten years before, had cowered trembling in their corridors, miles below the Surface. Most of these folk were under forty, for the older people found it hard to endure the vast changes in their way of life that Surface living entailed; most of them still lived in the corridors, though not so far below the surface as they once had. But the younger folk, living in this age of new hopes, and possessing the disrupter, that mighty weapon that made human beings once more superior to the savage things that had for so long been their masters, these younger folk trod confidently about in their city and looked forward with neither fear nor anxiety toward each new campaign against the Shelks.

Now, on a certain day in late winter, one man, heavily clad in gaily colored, quilted jacket and leggings, ran wildly down one of the streets toward the center of the town, evidently in the last stages of hysterical fright. Twice he was stopped by pedestrians, who tried to find out what ailed him, but each time he gabbled something unintelligible, pointing as he did so to a flyer that was rising and sailing away into the west, its huge wings flapping faster and faster as it rose. Each time, he broke away from his questioners and continued his headlong flight into the city.

He came at last to the huge building that housed the administrative bureaus of the city, and at the entrance he was stopped by a guard. He gabbled wildly and tried to push his way past the guard, but the soldier forced him sternly against a wall and bellowed for his superior. By the time the officer arrived, the winded messenger had gained some control of himself, had managed to explain at least part of his message to the guard, who now became as excited as the messenger. Both guard and messenger now broke into rapid talk, but the officer silenced the guard and listened to the still excited messenger.

A moment later, all three were speeding down the building’s central corridor toward the main office.

They came to a door with a symbol on it — a Shelk’s head, with a gold band on the brow. The officer knocked, a secretary answered, and after a moment’s delay, they entered.

In the inner room a man sat at a desk littered with the thin, wooden paddles that were the closest humans had come to paper since his emergence. He was a tall, vigorous young man of about thirty, but already there were quite a few gray hairs mingled with the red about his temples. He wore a thin gold band around his head; his quilted jacket was tossed over the back of a chair, showing the blouse of the blue tunic he wore underneath. Vertical lines of worry were just beginning to show in his forehead above his nose, for the responsibilities that he bore were heavy, and he bore them almost alone.

But the messenger, the guard, and the officer paid little attention to his appearance. The officer opened his mouth to speak, but the messenger threw himself across the desk, crying out wildly: “Yofric has fled! Yofric the Stranger has fled in the Thirty-Seven, and has taken our lady! And the lord’s son! Even now he flies into the west!”

The man behind the desk looked questioningly at the officer. The messenger had poured out his statements in one breath, almost as one word, and his listener had grasped the purport of little of it. The officer, almost as excited as the other, attempted to elucidate.

“Yofric the Stranger has stolen a flyer, my lord Tumithak, and has kidnapped Tholura and your son!

Even now he is fleeing into the west in the flyer that he stole.”

For a moment, Tumithak of Loor, whom two hundred thousand men called Lord, stood uncomprehending and dazed. Then, white-faced and trembling with anger and anxiety, he exploded into action. He turned and began barking orders.

“Prepare Flyer number Twenty-One for immediate action, Luramo,” he snapped at the officer.

“Mount a disruptor and a long-range fire-hose with a needle beam. Find Nikadur and Datto and tell them to come at once. You!” He snapped at the guard, “find me Kiletlok the Mog and bring him here.” And lastly, “You, messenger! Return at once to my home and bring here Domnik, the lady’s servant. He’ll know most of the wherefore of this.”

The three flew out of the door as if on the wings of the wind, and Tumithak paced the floor impatiently for a minute or two. Then he picked up a bell and rang it vigorously. By the time a guard answered it, the Loorian leader had already donned his quilted jacket and was buckling it.

“Get me my arms,” he demanded.

The complete version of “Tumithak and the Ancient Word” appears in Black Gate 12.

One thought on “Fiction Excerpt: “Tumithak and the Ancient Word””