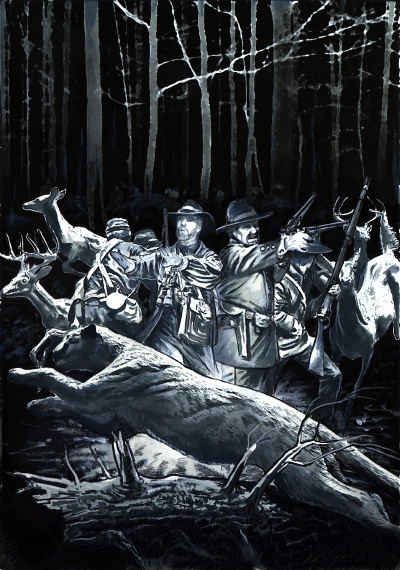 Captain Valamont had us moving well before first light. With the dark limbs overhead and the muddy road beneath, we were forced to lead our horses along the path, but at least we were making progress. At every step, we expected to be overrun by hordes of Indians armed with spears, poison darts, and every sort of infernal weapon. A suggestion had been made by Sherman that we might search for Mr. Richardson, but this was quickly dismissed by the captain, who did not want to separate our forces in such proximity to the enemy. The tension was so thick, it made even breathing seem an effort.

After what might have been weeks of darkness, the sky finally turned to gray and then pink. Even with the dawn, things did not feel as they should. The forest was far too silent. There were the clicks and whistles of geckos, but few birds. Even the morning chorus of howler monkeys was muted and distant.

As the light grew brighter, the tension that had tightened my chest all night began to relax notch by notch like the loosening of a belt. The tall gray trunks of the great forest became visible around us, Provision Tree, Raintree, and Kapok rising up high while smaller Cacao filled in the spaces between. All of the trees were well freighted with vines, bromeliads, and other aerial plants. Far up in the branches of a Toboros Tree, I even saw a miniature garden of cacti clinging to the boughs. The road passed up through an area of dense thorny undergrowth, and I could see all the soldiers scanning the brush for any sign of marauding savages. But we encountered no sign of Indians that morning.

Soon enough, the road passed out of the forest and into an area where old logwood works had cleared a wide swath right up to the Sourde. The path here was drier, and with the trees cleared back we were able to climb onto our saddles. Mounted, with the sun rising up over the western hills, and the road clear ahead, the events in the wood seemed more nightmare than truth.

Captain Valamont consulted his map. “Caney Creek is only a short way,” he said, “and Applewash no more than two hours ride beyond.”

As predicted, only a mile or two passed before we rode over a low hill and saw a stream snaking across the valley below. The land here was cultivated, with well-planted fields of barley and cotton. The road brought us down to a bridge that was new and well built, with supports of placed stone and a deck of wide, thick planks. The heavy rains of the last few days had broadened Caney Creek until it looked near as wide as the Sourde, but the feet of the bridge stood well back from the banks. The fields on the other side appeared lush and pleasant under the morning sun. Two solid farmhouses were visible in the middle distance along with a cluster of barns, sheds, and small buildings.

Captain Valamont rode up to the bridge and looked across the foaming brown waters of the stream. “The Bracewaithe lands are just ahead,” he called back. “If the road stays dry, we’ll be in Applewash while the savages are still buttering their toast for breakfast.” He pressed his heels to the big gray and started over the bridge.

I was none too sure that Indians ate a proper English breakfast, but I was not about to say anything that might dampen the captain’s mood. Sergeant Harness followed across the bridge. I rode across next, followed by Sherman. Donnel trailed the group, with Mr. Richardson’s riderless horse in tow.

Captain Valamont was clearly anxious to reach Applewash. He passed the first house without a glance and seemed ready to ignore the second, as well. As we trotted on, I noticed that there was no smoke at the chimney of either house, not even from the stacks on the kitchen houses. “They’re not baking any bread this morning,” I said to Sherman.

The soldier pointed at the field beside the road. “They’ll not be making bread for a year less they get out Ã¢â‚¬Ëœere and scythe that barley.”

I looked at the yellow and green stalks. “It’s ripe?”

“A week and more past ready,” said Sherman. “I cut barley some back in England. See Ã¢â‚¬Ëœow them grass heads is all bent over? Another week in this rain, and this’ll all be rotting on the ground.”

A wind swept over the fields, and I saw how the heavy stalks bent and swayed. If what Sherman said was right, it could mean trouble for more than just the farmers that owned these fields. Most people in Selvanos worked at the lumber business. Landowners kept house gardens, but the people in St. George and the larger settlements were depending on the few large farms for food. The barley rotting in this field might mean a shortage of bread in St. George come next month.

With these unpleasant thoughts in mind, we moved by the second house and its cluster of out buildings. I was passing the last of these structures when I saw something white in a bare patch of earth next to a small shed. The thing on the ground was too far away to see clearly, but there was a feel to it — a certain color, a particular texture — that made me rein in my horse right away.

“Captain Valamont,” I called. “I think you should have a look at this.” Without waiting for the soldiers, I steered my horse off the side of the road and up through thick barley that grew tall enough to brush against the belly of my mount. I passed into a circle of shorter grass in front of the white painted shed, and stopped next to the object I had seen shining on the ground. The horse snorted, and I had some difficulty getting down without being toppled. Once on the ground, I tugged my reluctant mount forward and knelt down for a closer inspection.

The rest of the expedition came up behind me while I was still kneeling in the dirt. “Mr. Brown,” said Captain Valamont. “We have to move on. There is no time for capturing fleas or looking at flowers.”

I stood up. “What about skeletons?”

Sergeant Harness hopped down from his horse and stomped over to where I was standing. “This is no skeleton,” he said. “Just animal bones.”

The soldiers pushed in closer. Sherman laughed. “It’s a sheep, see? Only a sheep.”

Captain Valamont drove his gray in amongst the other horses. “Mr. Brown, we did not come to this place to examine the remains of someone’s lunch. Get back on your mount and let us get on with this pointless journey.”

I examined the remains a moment longer then shook my head. “Something odd happened here. This animal wasn’t butchered.”

“What do you mean?” asked the captain.

“Look here.” I ran my finger along the smooth curve of a rib and around the protruding axial process of a vertebra. “The bones aren’t broken. The skeleton is all together, without any knife marks on the bones.”

“No,” I said. “I’ve seen skeletons flensed for display, but none was prepared anything so cleanly as this.”

Sergeant Harness took another step forward and pushed away a polished femur with the toe of his boot. “So no one cut it up,” he said. “What does it matter? It’s clear enough what happened.”

Harness pointed toward the nearby house. “This here farm is empty. Maybe the Indians got them. Maybe they went to St. George with all them troublemakers. Wherever they went, they left this sheep behind to starve.”

This answer seemed to satisfy the soldiers. The Sergeant went to get back on his horse, while Captain Valamont and the others turned their mounts away.

“Wait!” I shouted. “This animal didn’t starve. There’s still grass and barley in reach of the rope. And see how this grass has only been cropped a little? This sheep wasn’t staked here more than a day or two before it died.”

“Died of thirst, then,” said Harness. He slipped one boot into the stirrups and heaved himself up onto his big bay horse. “Sheep die, boy. Who cares why?” Behind him, the others trotted through the barley back toward the road.

I released my own horse and grabbed the side of the Sergeant’s saddle. “It wasn’t thirst or hunger.” I pointed to the ground. “Look at this grass. It’s been raining for five days, but the grass has hardly grown. Something happened to this sheep, and it happened fast. This animal was alive only a very short time ago.”

Sergeant Harness shook off my hand. “You’re a fool, Brown. That animal’s been dead a month or more, look at those bones.” He put his heels to the bay and pulled away from me.

“I am looking at the bones,” I called after him. “That’s what worries me.” My own horse had wandered off a few steps, but thankfully it didn’t try to flee when I approached. I managed to snag the dangling reins and struggled back onto the saddle. From the ground, the white skull of the sheep gave me a broad ruminant smile as I turned my mount and followed after the soldiers.

The first three horses had crossed the field of barley and reached the road, with Sergeant Harness not far behind. I glanced back at the shed and the skeleton, reluctant to leave. When I looked around again, Sergeant Harness was gone.

For a moment, I could only stare in confusion. Then I saw that a patch of the barley was twisting and boiling. My first thought was that the sergeant’s horse must have stepped on some uneven ground and fallen. I urged my own mount forward, but the chestnut shied away, sidestepping. There was a sharp and unmistakable scent in the air. Lemons and spice.

A dark patch of horse was visible for a moment among the barley, a brown leg kicked at the sky, then it was gone again. A man’s arm popped up, and I was puzzled, because Sergeant Harness had not worn his red dress coat. Then I saw that the red did not come from a coat.

“Captain!” I screamed. At the same moment, Harness himself gave a great, outraged bellow that brought the three riders on the road around sharply. I tried again to force my horse toward the fallen man, but the animal only added a scream of its own to the bedlam and sidestepped again.

The barley was moving now, not just around the place where Harness had disappeared, but all along a hundred yard line. The stalks didn’t sway as they did in the wind, but jiggled and bounced. There was a sound as well, a soft shuffling, a creaking whisper that seemed to come from everywhere. I had a passing thought that the entire field was actually some fabulous sundew – an insect catching plant grown to a size where men and horses were its prey. Then a dark liquid spilled from around the stalks and into the short grass surrounding the dead sheep.

The liquid glistened like tar in the morning sun, black with glints of deepest red. As soon as it appeared, my horse gave another scream, reared up, and pawed at the sky. I pressed my knees hard against its ribs, but my horsemanship was not up to the animal’s thrashing. In a moment, both I and my rucksack were on the ground. The horse turned and sped away, darting out of sight between the out buildings.

The complete version of “The Naturalist: Going to Applewash” appears in Black Gate 10.

One thought on “Fiction Excerpt: “The Naturalist: Going to Applewash””