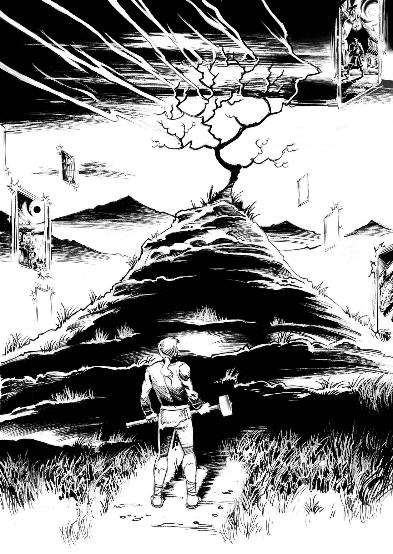 The straps of the basket of bricks bit into Ian Smithson’s forehead and shoulders. His eyes smarted, and he could not shake his head to throw off the pools of stinging sweat. The hot blue sun of the world of the Portal burned down, casting dark red shadows.

Ian plowed ahead through happy crowds at the opening day of the fair, salt stinging his eyes, back aching. He squeezed his eyes shut and then opened them, blinking furiously. For a moment his vision cleared, and he saw the serf catchers.

They were at the far end of the lane, dressed in uniforms of black and green, stopping people and checking ears. His own ears bore the notches of a marked serf. He was a runaway, exactly the kind they were looking for. His height, and the towering basket of bricks on his back, made him stand out from the throng. His blond hair and blue eyes also drew attention in this crowd of short, dark Sothrons. The serf catchers could hardly miss him.

There was no way to put the basket off without help. He could not run carrying such a load. Ian squinted and tried to make out the crowded lane between canvas booths, display rugs, and wagons loaded with goods for sale. There seemed to be an opening to the right and Ian turned.

Bright lights flared on either side, surrounded by a nimbus caused by the sweat in his eyes. Everything was a blur, but he could make out tall, robed figures, one in black, one in white, casting fireworks from their fingertips.

Yesterday he had watched slack-jawed as the magicians plied their craft. Then his boss, Stolnesserene, explained that it was all a trick. There was no such thing as real magic on this side of the Portal. Ian was grateful to Stolnesserene, who had given him a job without looking at his ears.

The fake magicians had gathered quite a crowd, and Ian hoped for a moment that he could lose himself in it. The black magician shook his fist at the other across the way, and threw a fireball that left a large black smudge on the flowing white robes. The white magician screamed curses, and poured from his hands a stream of mice, which swarmed over his enemy. Now that he was in the know, Ian could tell it was all staged. In fact, he had seen the two practice the same act yesterday, while the fair was still setting up.

Stolnesserene himself materialized into Ian’s blurred vision. He whacked Ian’s basket of bricks with the silver headed cane he always carried. “Where are you going, you idiot? My tent is back that way.” Stolnesserene stood close to Ian. Because he could not look down, all he could see was a blurred image of the pink bald spot on the top Stolnesserene’s head.

Pulling on Ian’s arm, the short, stout showman turned him back the way he had come, and started him on his way with another thwack from the cane.

Free as he was with his cane, Stolnesserene was not a hard taskmaster. Many of the overseers on the plantation would have laid the cane across Ian’s arms and legs. Stolnesserene just hit the basket.

Ian considered turning around again, but that was sure to draw attention, and the serf catchers were not far away. They seemed to have stationed themselves, one of either side of the lane, checking the ears of all who passed by. Ian hesitated, unsure about whether to go forward or back. A runaway serf was a thief, stealing himself from his lawful lord. The punishment was the loss of a hand.

“What the hell are you doing?” The voice at his ear was one he recognized. Tod Millerson was a freeborn boy about his own age, who had been hired yesterday at the same time as Ian.

“Tod. I want you to do something.” Ian had to shout to make himself heard above the roar of the crowd.

“There are serf catchers ahead. I want you to distract them.”

“They can’t touch you. You’re freeborn. Your ears aren’t notched.”

“So you say. Suppose they beat me first, and then look at my ears.”

“Shame on you. You know it’s against the law for a worker to earn more than one copper a day.”

“It’s against the law for a serf to run away. That didn’t bother you.”

Ian reached a finger into his mouth, and pulled from his cheek his only coin.

“I’ll come looking for you if you don’t.” An empty threat if he were dragged back to his lord’s plantation.

He pressed the coin into Tod’s hand, and the lad was off, running straight toward the serf catchers, shoving people out of his way. He ran between them and on. Both followed, shouting, “Stop!”

Ian hunched his shoulders against the weight on his back, and moved quickly forward. A few more minutes, and he was in the welcome shade of Stolnesserene’s tent and hands were lifting the bricks from his back.

The complete version of “Portal” appears in Black Gate 6.