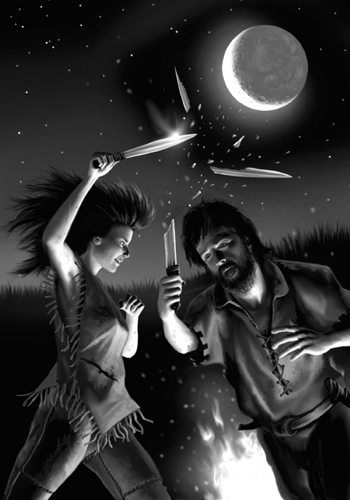 Wintercamp’s last days were always a hive of activity. Wagons that had sat the winter in one spot were rocked free of ice. There were always leather lacings and cracked or crumbling vertebra bones to renew in the compound wheels, quite a chore especially on the twelves where the wheels were taller than those who worked at fixing them.

Kris found herself nagging Paddy to pay closer care to his wagon, an eight that had seen better days. Aside from the bits of cleverness such as the steering harness that kept the wagon in line, Paddy’s outfit was clearly the work of a man who lived by himself, who didn’t mind letting little things wear to breaking.

There were newly made or at least newly patched sails to haul up masts, rigging to oil, loaned tools to retrieve. On the smaller wagons runners were swapped for wheels, axles polished and greased, worn seats restuffed and sewn plump and new. Every so often the owner of one of the big wagons stopped by to entice Kris into joining a race team. Outriders and hunters were valued crew because they were well practiced with spear and javelin, and hitting the targets was a big part of winning the meetup races. The feeling of a big eight or ten under full sail, deck crammed shoulder-to-shoulder with throwers, was second only to the dancing. Kris grinned, thinking there would be plenty of chances to practice come springparty, which waited only on the spring wind.

The elders strolled the camp to assure that the broken and used up did not collect unduly — such discards were gathered and then strewn lightly upon the plains where the elements and the grass would make them disappear. “No midden here,” said Paddy when elder Jon paid a visit. Jon snorted, while Kris looked a question at the old man.

“Means trash pile,” Paddy said, and Kris added it to the odd store of knowledge she’d gleaned from Paddy over the cold months.

Unlike festival, which began at dawn with the return of the racing wagons, springparty would begin at night. There would be no race to mark the occasion, just the usual crush of last minute chores. Kris cut her dark brown hair in the late afternoon and reveled in the lightness of her head. Paddy took a look and made a face that meant he wanted to trim it, and he did, his deft hands cool and precise on her neck as he turned her this way and that.

“Let’s do yours,” she said boldly, seeing he’d kept his beaded leather cap atop his head despite the middling warm afternoon air. Around them the plains grasses were sprouting anew, spreading a taste of fresh green in the air that would only last a day or two. Her last early morning run had been the final good wind day of the winter season. For a time the winds would blow this way and that, good enough for a short dash around wintercamp to test wheels and rigging, but worthless for covering ground. Real wind’s return meant springparty that night and travel the next day.

“No thanks,” Paddy said. Kris had spent enough time in his company to cock her head and give him a thoughtful look. “Oh no,” he continued. “I know that look, and that look is questions. Just no thanks for now, Kris, and here’s your hair done for springparty.” He made a washing motion with his hands, dropping stray hairs into the slight and swirling breeze. She turned to face him.

“You’re a caster now, as well as a coot?” Coot was one of his strange words.

“Ha ha,” he said in a plain tone. That meant he took her meaning if not all the joke behind it.

The inconstant wind fell away. From the far side of the ring of bare-masted wagons came a shout, then another. With a flap and a thrum the leather side of Paddy’s eight shook from the onrush of a steady wind, the spring wind. Kris’s shorn, brown hairs blew away, twirling down to the new grass shoots beside the wagon.

Paddy chucked her on the side of her head and laughed. “Time to feast!” Kris knew he was right: the last of the giant barrels of bloodmead would be breached, the last of the stores from the lean winter hunts cooked and served in a savory stew that was one of Kris’s favorite things in the world. She checked the sun. Not very long to sunset. Time enough to get a wash in at one of the water bags while the late day warmth was still in the air.

When Kris returned, drums announced the start of springparty, though from the rosy cheeks on her old friends Dill and Arla it seemed they’d gotten an early start. Kris hailed the crafters as she stepped down the mid-leg thighbones that were the spokes on Paddy’s wheels. There was a whiff of her favorite stew in the air, and her stomach groaned with anticipation.

Kris nodded and linked arms with Arla. In the center of the great ring of wagons a big fire was kindled, of things no longer needed that would burn, and as always of dried maggie dung. Now that the spring wind had set in, there would be a healthy crescent of clean air upwind. Packed dried sheaths of grass made for a mud-free dancing square, and Kris smiled in anticipation.

Dill and Arla’s oldest boy still made eyes at her, but she’d decided she was too old for him.

There was a fine young wooler who’d caught her eye. His grandmother, he’d said one cold winter night under a round and aloof mid-season moon, had made the scarf Kris wore, and would she like to learn the pattern of its weaving?

She’d dance with him or she wasn’t an outrider, and if he should offer to show her a pattern of woven wool, well, away from the great fire it was dark beneath the new spring moon, and there were ways other than wool to stay warm, weren’t there?

It was the third skin of bloodmead she should have turned down, Kris decided later. The first had warmed her, the second had inflamed her to feats of dancing she’d never before attempted, but the third darkened her vision and made her stumble. She sat to the side and watched what she realized was the end of springparty, slow dancing pairs in the guttering light of the big fire that was all but spent. The third skin was the wooler’s fault. He’d danced arm in arm with a girl from one of the tanner families, and gone off with her, into the dark. Even though she’d given up on the wooler, Kris found her eyes searching here and there for… “Quite a dance, I didn’t know you had it in you.

But I should have known, your mother kicked her heels just as high.” It was Paddy’s voice, but it wasn’t Paddy, it was… Kris shook her head. Yes, the third skin had been a mistake. She’d never had so much bloodmead before.

“And never again,” she said, and was so amused by the sound of her voice — it was lower, somehow, rougher than Kris imagined herself to sound — that she laughed so loud she saw faces turn to look at her.

“You’re not Paddy,” she managed to say, stopping after each word to make sure she got it right.

Paddy laughed, and it was his laugh all right, but who was this dark-haired man next to her, the man with Paddy’s face and voice but with short black hair oiled and groomed close to his scalp?

He finished laughing and frowned, turned his head to the side. Paddy opened his mouth to shout, and then Kris heard it too – the accelerating syncopation of a maggie’s six hooves at a gallop.

Then another, and then many more. Paddy’s shout near deafened her.

“Stampede! To your wagons!” His clear voice cut the night like a thrown javelin. For a moment afterward all that could be heard were the hooves coming out of the night.

The complete version of “Knives Under the Spring Moon” appears in Black Gate 12.