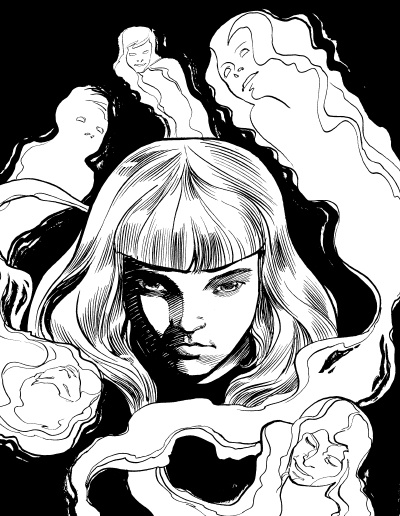 Mama was frowning, warning Rachel with her eyes, thinking thoughts so loud they hurt inside Rachel’s ears, “Now don’t you go doing anything, Rachel, don’t you embarrass us!”

Rachel wanted to answer, but Mama couldn’t hear. You had to talk out loud for Mama to hear.

On Sundays it was always the same and in the summertime it was the worst, standing there in the heat and the sun. Rachel leaned against Mama on the walkway leading from the front doors of the church to the front gate and the street. Rachel’s head hurt from the sun’s white glare. Her neck and chest felt squeezed by the heat. Her head felt heavy and her lungs felt empty no matter how much hot air she breathed in — and her bladder ached. She wouldn’t use the church restroom, not since she saw Pastor Stern come out of the ladies room at Christmas with a plunger, mop and bucket. She was afraid he’d come in while she was in there, even though Mama said he always knocked first, and that a church this small didn’t have a janitor, and that Pastor Stern did most of the maintenance himself. But Rachel would rather hold it until pee leaked down her legs than take a chance on being seen with her underpants down.

Mama and Daddy always talked to Pastor Stern after church. Always. Their voices droned on and on in the background like the nonstop chorus of bees in the flower beds.

“The Good Lord makes every sermon an easy task,” Pastor Stern always answered. His bald head gleamed and his gold-rimmed glasses caught and reflected the hazy, glaring sunlight like mean little mirrors. Rachel lowered her gaze to the toes of her shoes, but the sunlight bounced off the shiny patent leather and up into her eyes. She felt wobbly in the knees.

It was always the same on Sundays, with her parents saying things like, “wonderful and lovely” and Pastor Stern using words like, “inspiration and blessed.”

Rachel crossed her legs and squeezed.

Be patient, Daddy answered. Daddy heard Ã¢â‚¬Ëœthink-talk’ too, but not at the same time as regular talk — not like Rachel could. Sometimes Rachel had to shout inside her head before Daddy heard, and sometimes when he tried to think-talk back, he had to strain. Rachel heard Daddy and the Pastor the same time she heard Mama, and she also heard two ladies in the parking lot, gossiping: “She claims she had her colors done professionally, but mercy, that fuchsia dress she wears!” Rachel didn’t like those ladies. They were what Mama called mean-spirited people.

Rachel liked Pastor Stern, though. Mama said Daddy and the Pastor had been friends since they were little boys. The Pastor had a glowing face. Mama called it an aura. To Rachel, it looked like happiness.

“… haven’t beaten that Baptist team in five straight seasons, though…”

Rachel slipped her hand into Mama’s cool dry palm and tugged, hoping for at least a little comfort. Oh please, she thought as loud as she could, I got to pee so bad! Can’t we go home?

And then, as if a transparent door had opened in the air to Rachel’s left, shadows came, circling and whispering. Gray, wavy shadows swirled through the door, blurry like water, dry like heat. She had seen them before a few times, but only briefly, only for a moment. They knew her name.

Rachel, Rachel, Rachel. Several shadows whispered all at once, speaking at the same time and yet slightly apart so that their words had a wavy, echo sound.

Go away, Rachel thought. I can’t think-talk with you. My parents are here and they said not to think-talk to anyone except Daddy, because it’s our secret.

Mama was laughing at one of Daddy’s jokes. Pastor Stern laughed too and shook his head, the sunlight bouncing off his shiny, tanned dome. He smiled a lot, like someone who didn’t mind hearing old jokes or unclogging toilets at Christmas.

Rachel slipped her hand from Mama’s and took one step toward the gate, then a second step.

Daddy talked loud when it was about baseball. “Presbyterian team has a strong third baseman and a talented short stop…” And Pastor Stern said, “I’ll be lucky to get even one home run this year with my arthritic knees.”

Daddy turned and glanced in Rachel’s direction. Who are you talking to, Rachel?

“Just once, I’d like to blast one over the billboard, right over it.” Pastor Stern’s eyes were shining toward heaven.

Rachel, Rachel, Rachel. Come through the gate, out to the sidewalk. Come see. Come see. The wavy, whispering shadows only came shimmering around when she was hungry, tired, too hot or had to pee.

Rachel placed her hand on a white gatepost, felt the warm, painted splinters, rough and smooth at the same time. Heat rose from the sidewalk. Shadows flickered in and out of her peripheral sight. Heat wave people — that’s how she thought of them. They only came around in hot weather, and always before only when she was alone. Why wouldn’t they go away? What did they want?

It was noon now. Except for three other parishioners milling around outside the church there were very few people in sight. A block away down Main Street, a gray pickup truck with primer-orange doors eased around the corner and pulled up against the curb. A man wearing blue shorts and a white T-shirt got out and ran into the grocery store. He left the truck engine running and the truck door open. Probably needs the Sunday paper or a quart of milk. He’ll be back in a few seconds. The man was too far away for her to hear his thoughts. She knew she didn’t like him though. She knew he had a mean aura, and that he lived alone in an old trailer in the woods and that he shot birds and squirrels from his window just for fun. She didn’t know how she knew these things. Knowing them was something as new as being eight years old.

A boy in tan shorts and a red tank top peddled a blue bicycle down the street and was gone again in seconds, still tasting the pancakes and maple syrup he had for breakfast. He’s on his way to meet a friend and they are going fishing.

All the buildings up and down both sides of the street looked bleached and faded. Heat rose up in zig-zaggy waves and made everything hazy and soft, as if seen through a gauze curtain.

Rachel leaned on the gate post and felt the heat wave people hover closer. They were listening. She allowed her thoughts to float out and around her. Daddy helped paint this fence last summer, along with some other men on the baseball team, kneeling in the dust alongside Pastor Stern. The Pastor’s knees keep him from doing it all by himself, but he plays baseball and joins in the picnics. The ladies spread pot luck dishes out on picnic tables with big checkered or flowered tablecloths and stacks of paper napkins and the best Tupperware, all yummy stuff, all made by mothers and wives and grandmas and aunts and even some single ladies — Ã¢â‚¬Ëœold maids’ those mean ladies call them.

Rachel wasn’t sure the heat wave people were interested, but she heard them giggling behind her, so she continued. Daddy says we’re special because the two of us can think-talk. Mama knows that we can, but she says that other people wouldn’t understand, and so we’ve got to be careful and —

What are you doing, Rachel?

“… and I decided to go for the bunt and took em’ by surprise, yes sir…” Pastor Stern continued.

“Seems like you make it across home plate at least once every game, Pastor,” Mama said, and Pastor Stern’s aura glowed even brighter.

Baseball! Some people want to win so bad they get hurt trying. Some people go home angry and disappointed. Why even play baseball then? Rachel kicked the gatepost with the toe of her shoe. THUMP.

Rachel. Daddy tossed a glance over his shoulder. Just a minute longer and then we’ll head for home. Go use the ladies restroom.

Rachel shook her head no.

“I have a new catcher’s mitt,” Pastor Stern said. “But it’s still stiff as stick.”

Down Main Street a little boy came out of the grocery store. Rachel squinted through the heat rising off the concrete. It was George Thronsen’s little brother. George would be in second grade with her in September. His little brother wasn’t even in kindergarten yet. What was he doing out all by himself? Rachel couldn’t remember his name. She squinted more, until her eyes were nearly shut and the sunlight made little stars through her eyelashes.

Henry’s hair was strawberry blond; copper like Mama’s best pots. He walked toward Rachel up the other side of the street carrying a brown sack, its top twisted into a gooseneck. He swung the sack back and forth, pausing to kick a rock into the street and to pick up some small treasure from the sidewalk; a piece of bright blue glass.

Daddy’s voice drew Rachel’s attention for a second, “… my toe stuck out behind, safe, touching third base but ready to steal home…”

Across the street, Henry paused at the curb and looked left and right. Rachel checked up and down Main Street too. No traffic. Red light at the intersection. It was safe for him to cross.

Henry headed out across the wide, cracked concrete, his feet looking as if they never touched the pavement, as if there were gaps between the bottoms of his faded red Keds and the street, as if heat held him off the ground.

The man in the blue shorts came out of the grocery store, running, carrying something pointed in one hand and a sack in the other. Rachel felt a chill start at her heels and race up her legs, up her spine to her scalp. The man ran around to the open door of the truck and jumped inside. A second later the truck’s tires squealed on the pavement. Henry squatted in the middle of the street, prying something from the crack, digging with his stubby fingers.

“Henry, come over here,” Rachel said aloud and stepped toward him.

The complete version of “Heat Waves” appears in Black Gate 8.