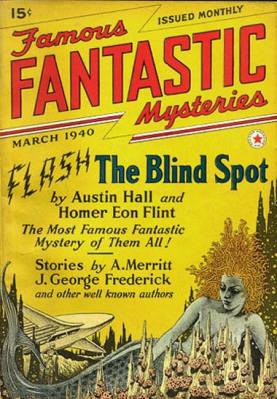 Last night at dinner we were discussing (as one does) Homer Eon Flint.

Since my guests were working on ideas for the 2011 Potlatch convention, we can be forgiven this. Flint was a local author, having grown up in San Jose, and there was talk of doing a panel on him.

I had not known that Flint was working in a shoe repair shop in SJ, or that he was killed in a car crash (perhaps after stealing it from a local gangster, perhaps instead murdered by that local gangster).

It’s covered on his Wikipedia page, and in the article by his granddaughter Vella Munn, “Homer Eon Flint: A Legacy,” available on the Strange Horizons site.

Munn’s piece talks with great respect of the work of one Mike Ashley in ferreting out facts without disturbing the family’s peace. Munn mentions that there were other writers in the area, with whom Flint (actually, Flindt) used to hang out when he lived here in the teens and early 20’s.

Forry Ackerman talks about Austin Hall meeting Flint in his shoe shop, in his introduction to The Blind Spot, the 1921 novel the two wrote together.