Arisia is one of three prominent SF/F/H conventions held each year in the Boston area (Boskone and Readercon being the other two). This year was Arisia’s 22d edition (January 14-17, 2011) and my 18th consecutive Arisia.

Each of these three conventions has its own distinctive focus. Readercon, usually held in July, is devoted entirely to the reading, writing, editing and publishing of SF/F/H. Its Dealers Room is unashamedly devoted entirely to books and other genre related printed materials. Readercon  does not stage an art show. Boskone, usually held in February, has its primary focus on genre writing , editing, and art with a secondary, minor, interest in gaming, filking, costuming and films. Boskone’s Dealer Room is strong on genre books but also gives a noticable nod to games, crafts, and costuming. Boskone stages an art show as a major element of its programming.

Arisia, usually held in January, was founded in 1989 by members of Boskone who wished to expand the range of interests served by the convention, and held its first separate convention in Boston in 1990. Like Boskone, Arisia took its name from the works of E.E. Smith. In Smith’s universe the Boskones were the bad guys and the Arisians were the good guys. In its fourth year, 1993, Arisia became the Boston area’s most attended annual genre convention, at about 1700 persons. This year’s attendence looks to match or exceed last year’s mark of just over 2400, making it about twice the size of Boskone and Readercon.

END_OF_DOCUMENT_TOKEN_TO_BE_REPLACED 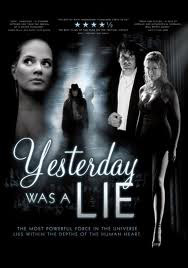 “Yesterday Was A Lie” is an indie film that indulges in experimental exposition right out of the gate.

The story unfolds in a purposely non-linear fashion, and the unwary viewer can easily lose track of what is happening. The blurbs identifying the film as a “metaphysical mystery” do little to suggest how different is this film from what one might expect a mystery film to be.

The subscriber reviews in Netflix and Blockbuster seemed to generally pan it, although those who gave it five stars mostly did so while not sharing their revelation of what the film is about.

The ‘genius groups’ take seemed to be that one either gets it or one doesn’t get it, and if one doesn’t get it, one won’t understand it in any case. Those of a sub-genius persuasion, and I count myself among them, will very likely benefit from an understanding of the story before seeing the film.

END_OF_DOCUMENT_TOKEN_TO_BE_REPLACED 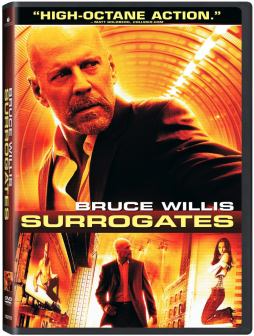 Early on in this film we see Bruce Willis with hair and looking young, and not Die-Hard bashed up, and we wonder absently if this time he’ll actually finish the film as scar-free as he began it. The Willis we begin with is quickly established as a ‘surrogate,’ the robot avatar of the real Willis character, Tom Greer, and it doesn’t take long for both Greer and his surrogate to get bashed up in familiar form.

The problem for the inhabitants of near-future Boston — as well as of the rest of the world — is that mind-boggling economies of production have resulted in custom made, universally affordable, avatars brought to market for just about anyone who wants one, and now real people are vegetating alone in their homes while vicariously carrying on social interaction with each other through their surrogates.

The two inventors have had a falling out as to how much of a good thing surrogates really are. The ousted partner, Lionel Canter (James Cromwell) has decided they are robbing humankind of their humanity and has taken steps to sink the business.

END_OF_DOCUMENT_TOKEN_TO_BE_REPLACED 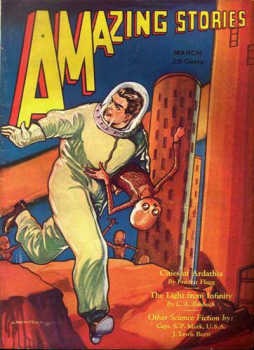 Newcomers to fantasy collecting may be unaware of the scope of pertinent and very useful information on the web, and particulary the resources assembled by members of the Yahoo Fictionmags Group. The terms “Big List,” “FMI,” “Galactic Central,” “Locus Index” and many others crop up without necessarily being understood. Fictionmags includes the authors of some of the most seminal and definitive reference works on magazine Science Fiction, Fantasy, and General Fiction. Not only is this material substantial and providing of answers to many questions, but it is also FREE to anyone conversant in accessing the internet.

The major portal to this trove is www.philsp.com, the website of Fictionmags’ Phil Stephensen-Payne. This place is rather like a fantasy collector’s version of the Smithsonian. Just about everywhere you turn, there is something of interest. The site opens directly onto Phil SP’s  “Galactic Central.” If you’ve ever wondered what a full run of Amazing Stories, Astounding/Analog, New Worlds or most any other SF prozine looks like, this is where you get to scroll through pages of color cover images arranged chronologically as illustrated checklists (including, for example, an up-to-date Black Gate checklist).

There are tens of thousands of these images from SF/F/H, Western, Crime, Adventure, Romance and general fiction  titles. I’ve contributed images to this project from my own collection as have many others, and Phil has also gathered the content from many sources on the internet as well. There is also an accounting (The Big List) provided of all of the magazine titles pictured in Galactic Central showing where else they are more fully indexed.  Huge as it is, this project is still not done, and Phil will probably have to come back in another lifetime to complete it.

END_OF_DOCUMENT_TOKEN_TO_BE_REPLACED 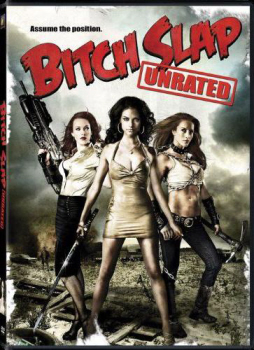 Bitch Slap the (unrated) film relates to fantasy fiction how, you may ask?

The cast includes Lucy Lawless (Xena), Kevin Sorbo and Michael Hurst (Hercules).  Fictionmags chum and fantasy novelist Damien Broderick passed along the intelligence back in December ’08 that the husband of a friend of his had a hand in making the film. Don’t know if it ever made the theaters, but it’s now out on DVD.

The box art has the three generously proportioned leading ladies in costume: short spandex gold-lame dress/black skirt & fishnets/low-rise jeans, stage-center. Hey, what’s not to like going in? Most of the viewer reviews on Netflix and Blockbuster panned it. The remaining 10% seemed to really like it.

I confess I liked it. It’s intentionally trashy, but it seems we haven’t had a good trashy girl-fight film since Faster Pussycat, Kill Kill.

Australian Shakespearian actor Michael Hurst is Gage, a scumbag dealer in high-priced stolen goods who has acquired at least one item of interest to each of the three kick-ass babes who, early in the film, get very medieval on him.

END_OF_DOCUMENT_TOKEN_TO_BE_REPLACED 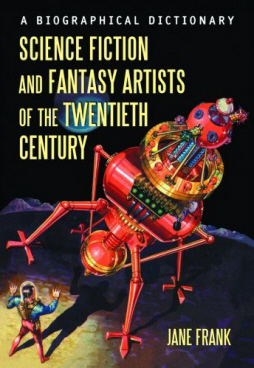 My initial interest in amassing my collection of SF & Fantasy magazines began with the appeal of the cover art.

I jumped on Robert Weinberg’s Biographical Dictionary of Science Fiction and Fantasy Artists when it was published in 1988. This work has been virtually alone since then as a definitive coverage of the lives and work of most all of those whose art graced the genre pulps and digests. As with Mike Ashley’s work on the history and accounting of the magazines themselves, Weinberg’s book took front and center on my shelf of core reference books which explain so well to me what I have in my collection.

Reference books of this sort are few, and a work of passion, and as such become updated only with supreme will and dedication, as in the current case of Mike A’s updating of his original 4-volume history of the science fiction magazine. I really hadn’t expected a similar effort to come out of the Art segment of the field. Fortuitously it has now appeared.

END_OF_DOCUMENT_TOKEN_TO_BE_REPLACED

Readercon is a science fiction convention held every July in or near Boston, Massachusetts.

There was rumor of a planned gathering of FM-ers at the con however, consistent with past efforts at such planning, the group maintained its unblemished record of such good intentions remaining unrealized.

Probably the main spanner in the effort was the involvement of so many in our number on panels, precluding a quorum of FM-ers at any one time at the bar during the day. For awhile Paul di Filippo appeared to be on almost every panel but with apparently only seven on his schedule had to vie with with Ms. Kowal (10), Messers Kessel and Malzberg (8 each) and Messers Clute and Edelman (7 each) for the title of ‘Panel-King/Queen’. [Non-FM-ers authors Walter Hunt and Shira Lipkin had us beat with 11 scheduled panel appearances each].