Arisia is one of three prominent SF/F/H conventions held each year in the Boston area (Boskone and Readercon being the other two). This year was Arisia’s 22d edition (January 14-17, 2011) and my 18th consecutive Arisia.

Each of these three conventions has its own distinctive focus. Readercon, usually held in July, is devoted entirely to the reading, writing, editing and publishing of SF/F/H. Its Dealers Room is unashamedly devoted entirely to books and other genre related printed materials. Readercon  does not stage an art show. Boskone, usually held in February, has its primary focus on genre writing , editing, and art with a secondary, minor, interest in gaming, filking, costuming and films. Boskone’s Dealer Room is strong on genre books but also gives a noticable nod to games, crafts, and costuming. Boskone stages an art show as a major element of its programming.

Arisia, usually held in January, was founded in 1989 by members of Boskone who wished to expand the range of interests served by the convention, and held its first separate convention in Boston in 1990. Like Boskone, Arisia took its name from the works of E.E. Smith. In Smith’s universe the Boskones were the bad guys and the Arisians were the good guys. In its fourth year, 1993, Arisia became the Boston area’s most attended annual genre convention, at about 1700 persons. This year’s attendence looks to match or exceed last year’s mark of just over 2400, making it about twice the size of Boskone and Readercon. 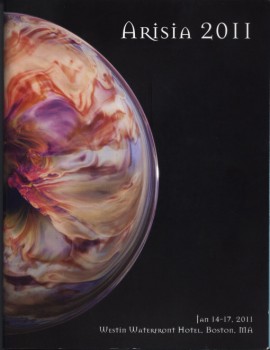 Like Readercon and Boskone, Arisia has a Writer Guest of Honor, hewing to its roots in SF/F/H publications. What has come to distinguish Arisia almost from its beginnings is the inclusion of a broader range of interests more or less balanced against the areas of writing & art. Gaming, costuming, dancing, crafts, weoponry, swordplay, leather & metalwork, films, filking, fan culture, science topics, children’s activities, and alternative lifestyle feature strongly in both its programming events and larger number of dealer concessions. Hall costumes and the Masquarade are very much a part of the con’s ambience (Steampunk Star Trekers were observed).

Arisia’s program books are professionally done and pleasing to the eye, and their pocket program addresses all the venues in an easy-to-follow format. Arisia also stages a local blood drive during the con in Heinlein’s memory. Arisia’s attendence figures over Boskone and Readercon are likely attributable at least in part to this wider range of interests served, So far, Arisia has refrained from becoming a Media Convention where the primary focus would be on media personalities, tv progamming, comics, and films. While all three of the Boston area conventions are welcoming of alternative lifestyles, Arisia actively includes progamming and dealer venues of interest to attendees in alternative lifestyles.

This year’s Arisia was held at the Boston Westin Waterfront Hotel, next to the Boston Convention Center, in Boston’s most extensive area of recent urban redevelopment. The Boston Westin is also the site of Boskone’s convention. One could almost hear the collective sigh of relief from the attendees at registration anticipating for the first time in many years that the con would finally have enough space and functioning elevators to accommodate Arisia’s needs. For all but four of its first 18 years, the Boston Park Plaza had been home to Arisia.

By 2006 convention attendence had become very cozy in the narrow hallways, elevators and fire escape routes of the Boston Park Plaza, a set of conditions likely leading to the seemingly abrupt end of the relationship between Arisia and the Boston Park Plaza following the 2006 convention. With its collective back against the wall, Arisia prevailed upon the Cambridge Hyatt Regency Hotel to host the convention in 2007, and in gratitude for its rescue Arisia rewarded the Hyatt with three more years of contract. Arisia proved to be a learning experience for the Hyatt from the start, dealing with confines seemingly even closer than was the case for the Park Plaza, and stylish but undersized elevators and escalators that often balked at the traffic. First year glitches prompted the Hyatt to compensate Arisia with a four-day period over the usual three-day time period in the following year’s contracts. Still, the average 2300 a year attendence seemed to be wearing on both the Hyatt and Arisia’s attendees, so it came as something of a relief for all to move the con once again. 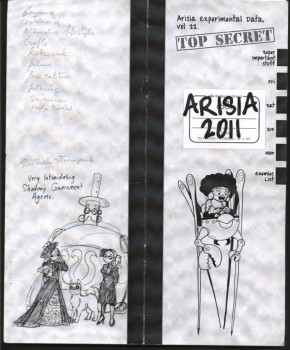 Wide corridors and speedy, well-functioning, elevators and a larger and more easily accessible convention layout improved this year’s Arisia over past years. With 640 scheduled panels and events, spread over the four-day Martin Luther King weekend, one had plenty from which to pick and choose. I usually check out the Artist Guest of Honor’s presentation of his/her work at the cons I attend and Arisia’s AGoH this year was glass artist Josh Simpson, an artist of whom I had not previously heard but whose presentation proved quite interesting. We watched an hour-long screening of the special PBS did of the trials and eventual success of his efforts to cast for Corning Glass an extraordinary and record-setting spherical paperweight exceeding 100 lbs. There followed an informative question and answer session during which we learned that his wife, Katy Coleman, was unable to be with him at the con due to her assignment by NASA as a mission specialist presently on the ISS (she will return to earth in May).

In a useful break from past practice, Arisia extended the length of most panels from last year’s 60 minutes to 75 minutes this year, with a 15 minute window between panels. This worked well in the SF/F/H literature panels I attended, notably “When Truth Is Stranger Than Fiction” (fiction is more coherent than life), “Religion in Science Fiction ( gods in SF are treated as imaginary, but treated in Fantasy as real), “What Women Want In Their Science Fiction and Fantasy” (women who do not have to reclaim their sexuality, kick-ass soccor moms), “Sexuality In Science Fiction” (SF focuses more on the body as an issue, Fantasy focuses more on the spirit as an issue).

Shorter panels either seemed to run out of gas early or else have more gas than time. These longer panels each came to a smoother and less chaotic conclusion than the shorter panels. This was also true of another art panel I attended featuring Lex Berman and husband and wife artists Frank and Brianna Wu providing commentary to Lex’s slide show of poster and cover art depicting Robots (originally intended to include Alien Invaders and Madmen, but the robots took all of the 75 minutes. Alien Invaders and Madmen, we were advised, will each have their 75 minutes within the programming for Arisia 2012 and 2013 respectively.) 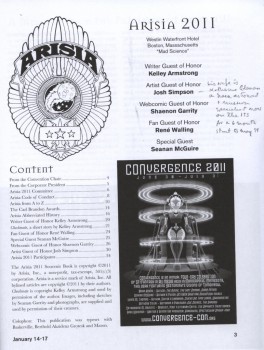 I also haunt the dealer’s room at the cons I attend. At Arisia, bookseller tables are a distinct minority, being overshadowed by gaming, clothing, weaponry, crafts and films. Almost hidden at the edge of a crafts and art section was a table featuring the books and memorabilia of one of First Fandom’s alumni, Harold Zitzow. Most all of it had been stored away for years and only recently brought to auction by his heirs. First editions of SF books from the late 40’s and early ’50’s & 60’s in VG to F condition generally in VG dustjackets, stood out. At the auction I picked up titles by Heinlein, Van Vogt, Leinster, Campbell, Weinbaum, and Hubbard for $25 or less. I did spring $50 for a first edition in dj of Miller’s “Canticle For Liebowitz”. The bidding on the Asimov ‘Foundation’ Trilogy in signed 1st edition Gnome Press’s went to $800 (out of my range, but likely still a bargain for the winner). My surprise bargain turned out to be a VG true 1st ed of “Stranger In A Strange Land” with a VG dj at $25, doubtless overlooked by those going after the Asimov books.
In addition to the main dealers room Arisia usually blocks out at least part of an entire floor of what otherwise would be guest quarters in the hotel proper for a ‘dealer’s row’.  Although the disparity between booksellers and other venues held forth on ‘dealer’s row’ as well,  tripping down the gauntlet of ‘shoppes’ was still fun and one had to make the run in order to reach the con suite at the end of the long corridor. This year’s con suite on the 16th floor gave an awsome view of Boston Harbor in confines reminiscent of the close quarters we knew at the Hyatt and Park Plaza. Plenty of food, though, and the carpets seemed to be surviving under sheets of plastic that grew increasingly sticky over the weekend.

I missed Arisia, but I’ll be at Boskone and Readercon this year.