Readercon is a science fiction convention held every July in or near Boston, Massachusetts.

There was rumor of a planned gathering of FM-ers at the con however, consistent with past efforts at such planning, the group maintained its unblemished record of such good intentions remaining unrealized.

Probably the main spanner in the effort was the involvement of so many in our number on panels, precluding a quorum of FM-ers at any one time at the bar during the day. For awhile Paul di Filippo appeared to be on almost every panel but with apparently only seven on his schedule had to vie with with Ms. Kowal (10), Messers Kessel and Malzberg (8 each) and Messers Clute and Edelman (7 each) for the title of ‘Panel-King/Queen’. [Non-FM-ers authors Walter Hunt and Shira Lipkin had us beat with 11 scheduled panel appearances each].

Anyone who hasn’t been to a Readercon, but has been to other cons, and who just likes books, would be astonished and gratified to find the Hucksters room at Readercon to be huckstering only books and other genre-related reading material without the distractions of gaming, costuming, weaponry, jewelry and other artifacts.

Granted, other cons would not be the same without these other venues, but Readercon’s thing is (gasp) reading, which it celebrates in the alley ways of its vendors with only things to read.

I picked up a pair of 1st ed/signed Paul di Filippo books, Fractal Paisleys and The Steampunk Trilogy which chum Don D’Ammassa assures me are excellent Di-Fi work.

I also bought, launched off the panel itself by co-editor Halpern on behalf of DAW, the anthology Is Anyone Out There? (coincidentally the subject of the panel itself, on which he was accompanied by contributors Paul DiFi, Yves Meynard & James Morrow. Dave Langford, of our number, but alas absent from the con, is also a contributor).

The program book featured a nice tribute to chum RIP Charles Brown, who quietly departed this life on his way home from Readercon last year.

Gary Wolfe, of Locus, also provided tribute to the man on the panel “Absent Friends’, on which others were also remembered, including George Scithers by chum Darrell, F. Gwynplaine MacIntyre (Froggy) by chums Clute, Gordon Van Gelder and Darrell, Phil Klass by Kathryn Morrow, William Mayne by chum Clute, and a bevy of others by Dave Hartwell (Shoenherr, Gottlieb, Holdstock, and agent Knox Burger).

Following upon last year’s panels on which the viability of print vs e-zine was debated, the discourse continued this year on the panel “The New and Improved Future of Magazines” albeit in a somewhat different direction than last year.

The emphasis this year was on reaching new markets with both forms, with e-zines perhaps being more accessible to the gaming, music, podcast, i-pod, Kindle/reader markets.

Chums Wallace and Adams shared the panel with others who touched on potential changes in the way stories are told in e-formats with hyperlinks, noting also that the rise of story submissions in e-form is facilitating submissions from countries whose traditional mail services made such submissions difficult in the past.

We recently had a thread on the Fictionmags group on John Kessel’s The Secret History of Science Fiction, in which a case was advanced for there being less of a difference between speculative fiction as generated by so-called ‘mainstream’ authors and genre authors than generally supposed. 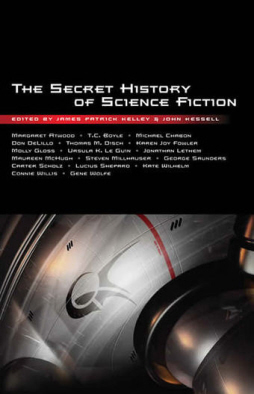 Chum Kessel, along with concept originator Jacob Weisman, took stage center on the panel “The Secret History of The Secret History of Science Fiction,” in which various questions were raised regarding the book’s thesis, including the possible problem of having writers of novels represented in TSHoSF only by short stories, and the reality that the interpretation of a story’s content depends at least as much upon the genre orientation of the reader as it does upon that of the author.

Reference was made to Jonathan Lethem’s peeve that science fiction as a genre blew it back in 1973 by not giving the Nebula that year to Gravity’s Rainbow.

I really needed several clones of myself to attend all of the panels I would like to have attended, but on my own managed to squeeze in ten, most with FM-ers on them including ones on Olaf Stapledon, Ted Sturgeon and Kate Laity’s panel on Gender and Sexuality in Contemporary Fantasy & Science Fiction (the genre, not the magazine !)

Guests of Honor were Nalo Hopkinson and Charles Stross, both of whom I had met previously at other cons. Nalo Hopkinson participated in a panel on Racial Diversity and Cover Art, the focus of which was on the continuing tendency of SF/F/H book jacket art to portray people of color as not.

In the estimation of the panel, the real ‘villains’ here were not so much editors and art directors (but still guilty in varying degrees) but rather the buyers at the book chains who often tend to shelve SF/F/H books with non-whites on the cover in ethnic sections rather than in SF/F/H, if they haven’t actually caused the publishers to alter the art itself.

Authors, it was noted, are often sqeamish about complaining to editors on the subject for fear of hurting their careers. Changing the situation, it was concluded, will have to come from objection to the practice by readers.

Thus far, Readercon has not outgrown the Burlington Marriott venue and attendence seems to have been fairly steady at 1,000-1,500 since arriving there from venues in Worcester and Waltham Ma. Altogether, another comfortable weekend celebrating things FM-ish.

For any others among us who may be contemplating attending in the future, you will certainly find plenty of kindred spirits. I’m not sure who of us has travelled the farthest to attend, but points of origin have included California, North Carolina, Canada and Philadelphia.

I look forward to seeing the usual suspects, and new ones, next year.

George R. Morgan has been a fan of Science Fiction and SF art since 1952.  A renowned collector, he’s built a complete run of all major and most minor U.S. science fiction magazines since 1926. He’s been attending SF conventions in the Boston area since 1981; this was his 19th consecutive Readercon. He’s been a member of the Fictionmags list since May 2001.

Photos by Patty Templeton. Except that glamour shot of Patty, obviously.  If you have the original, contact us. Please.

Thanks for the mention: I don’t really know many of the chums at all, not being on FM all that much of late or perhaps ever and spending all of my time writing in that remote Gothic castle with only deaf servants to accompany me. And a cat.

The sex and gender panel was lively; I hope we can have a continuation next year. There was a lot more to be said.

[…] author Shira Lipkin, last seen here as the poster child for our Readercon report, is holding a Blogathon on Saturday, July 31, to raise money for the Boston Area Rape Crisis […]