Bob Shaw was a prolific science fiction writer from Northern Ireland who wrote over two dozen novels, including The Orbitsville trilogy, about the discovery of an intact Dyson sphere orbiting a far star, Medusa’s Children (1977), Who Goes Here? (1977), and perhaps his most popular book, the Hugo-nominated The Ragged Astronauts (1986), the tale of a technologically advanced civilization that builds spaceships out of wood. It wasn’t something you forgot in a hurry.

Shaw produced several highly-regarded collections, including Ship of Strangers (a fix-up novel, 1978) and Cosmic Kaleidoscope (1979). His most famous short story is still fondly remembered today: the Hugo and Nebula nominee “Light of Other Days,” originally published in John W. Campbell’s Analog Science Fiction and Fact in August 1966. The central concept of ‘slow glass’ — which slows down light so that it takes years or decades to pass through — was simple and enormously compelling, and Shaw returned to the idea several times, most notably in his 1972 fix-up novel of slow glass stories, Other Days, Other Eyes.

Other Days, Other Eyes is advertised as a novel, but it’s really a fix-up composed of four related stories and some connecting material:

Whatever we want to call it, Other Days, Other Eyes still connects with modern audiences. It enjoys a 3.83 rating at Goodreads. Here’s a snippet from Philip Scott’s 4-star review:

The concept behind the book is brilliant – a scientist invents a form of glass so dense that light can take years to pass through. With experimentation the project is commercialised to produce a new product “slow glass.” Ten year slow glass windows, for example, can be set over a beautiful harbor or mountain view for a decade… storing the images for playback 10 years later. After 10 years the glass can be installed in household windows to playback that view for the next decade. The urban city dweller can have a decade of beautiful country views as the light makes its way through the glass

The concept is brilliant and unique. The book reads as a loose collection of short stories [centered] around the glass – murder mysteries played out years later through the slow glass windows…

In summary, the book still entertains. The concept remains unique and the sub-stories remain entertaining. One aspect that does stand out is the brevity of the story telling – the book is 160 pages and packs more into its covers than most modern 1000 page blockbusters. A short book that makes you think…

Over at Tor.com Jo Walton gave the book an affectionate retro-review back in 2010:

The book is a fix-up, three short stories set within the frame of the novel, covering slow glass from invention through all its implications and exploitations, and similarly covering the collapse of the marriage of its inventer (sic), Alban Garrod…

The most memorable part of the novel is the first “sidelight,” the Hugo and Nebula award nominated short story “The Light of Other Days” (1966). Nobody could forget the image of a man sitting in the rain staring at the windows of his house for glimpses of his dead wife and child. The second “sidelight,” the judge agonising over the decision he made to hang a man, whatever truth the glass would later reveal, is also terrific.

Mostly what we have here is pure extrapolation, in a thin shell of story. Slow glass starts out as a fortuitous discovery, causing problems with cars and planes crashing. It becomes a fad, with people having picture windows or “Scenedows” showing changing views of pretty places. It’s used to light cities at no cost. It’s used in the justice system, and eventually it abolishes the concept of privacy, foreshadowing concerns about “the transparent society.” Along the way there are two rather clever slow-glass mysteries, both solved by Garrod’s powers of intellectual scientific detection. This is all thoroughly satisfying to re-read now, as clever as it ever was…

There’s a science fiction plot, or rather a set of technological speculations embellished with a couple of interesting puzzles, and I commend it to you.

Other Days, Other Eyes was published by Ace Books in July 1972. It is 186 pages, priced at 95 cents. The cover is by J. H. Breslow. It was reprinted by the Science Fiction Book Club, and by Pan Books in the UK in 1978. It has been been out of print since the 70s. There is no digital edition,

I still think “Light of Other Days” is one of the most powerful sf stories I’ve ever read – its melding of a truly brilliant “hard sf” idea with a deeply moving human element makes it an all-time classic.

We talk a lot about forgotten SF writers of our youth, but I think Bob Shaw is probably the poster child. He died in 1996, and I’m pretty sure virtually his entire catalog has been out of print for at least 20 years. The only exception I know of is his volume in the SF Gateway Omnibus series, released in 2013, which includes three titles: Orbitsville / A Wreath of Stars / The Ragged Astronauts.

I used to teach an Intro to Literature course for undergrads, and used “Light of Other Days” as one of about eight required stories. I read a fair bit of the Other Days Other Eyes book and was much disappointed.

Dale — I bought OTHER DAYS OTHER EYES solely because of “Light of Other Days” (as most buyers did, I suspect), but I haven’t tried the other stories yet.

Have you reach anything else by Shaw?

“Light of Other Days” was the only Shaw story I taught. For that sf “unit,” other texts included, if I can remember them, Harlan Ellison’s “One Life, Furnished in Early Poverty,” Moore and Kuttner’s “Vintage Season,” Bradbury’s “All Summer in a Day,” Budrys’s “Rogue Moon,” Connie Willis’s “D. A.,” Lovecraft’s “Colour Out of Space,” and Leiber’s “A Pail of Air.”

“Pail of Air” would be a terrific story to teach — such a wonderfully creepy and original end-of-the-world tale, loaded with all kinds of alien mystery and suspense, and such a surprisingly upbeat twist ending. Nice choice!

I read his novel The Palace of Eternity a couple of months back and thought it was, if not wholly successful (a lot of disparate elements fighting for space in one short book) ambitious and often striking. I think it’s well worth reading.

I have several Shaw books, as yet unread, but he’s always been in the back of my mind due to his intriguing Slow Glass concept, which I vaguely recall turning up as a framing structure for some stories in Marvel Comics’ black and white magazine “Unknown Worlds Of Science Fiction”. By the way John, Shaw was from Northern Ireland, not “Island”.

Ack!! I wonder if I can blame that on Autocorrect?? (Fixed — and thanks for the correction.)

“Slow Glass” was indeed used as a framing device in Marvel’s classic Unknown Worlds Of Science Fiction, with the old antiquities dealer revealing the tales in samples of slow glass. Shaw’s original story was also adapted for the first issue by Tony Isabella and penciler Gene Colan. 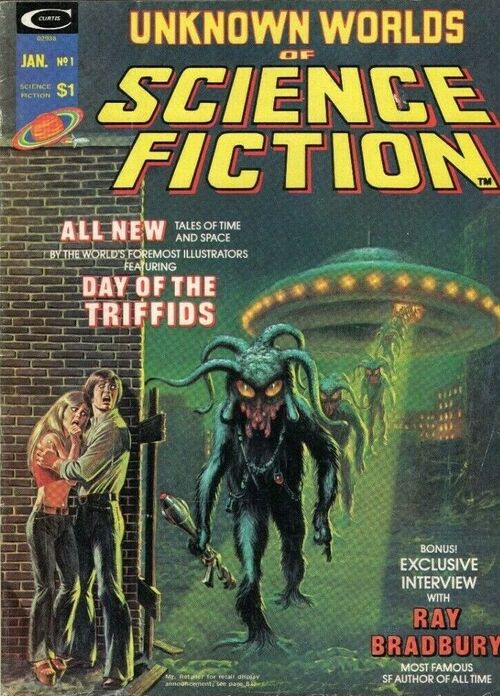