Personally, I have two bucket lists. One is filled with experiences that sound familiar like “learn a new language” or “ride in a helicopter.” The other is my goth bucket list, filled with things that cause my parents to ask, “why can’t you just go to Vegas like a normal person?” Quite high on this particular list was a visit to the Stanley Hotel in Estes Park, CO. I say “was” because due to attending a wedding in Boulder, I was less than an hour away. That meant a gracious “no” to the invitation to a ladies brunch the day after the nuptials, and a great big “yes” to a giddy 55-mile drive.

Stephen King’s book The Shining is one of my favorites, and the Stanley Hotel was King’s inspiration. That much I knew, but exactly how much of an inspiration I was about to find out. To clarify one thing, the Stanley has no connection at all to Kubrick’s film. The hotel which represented the exterior shots of The Overlook Hotel in the movie, is actually the Timberline Lodge in Oregon. All the interior shots were filmed at Elstree Studios in Borehamwood, outside London. 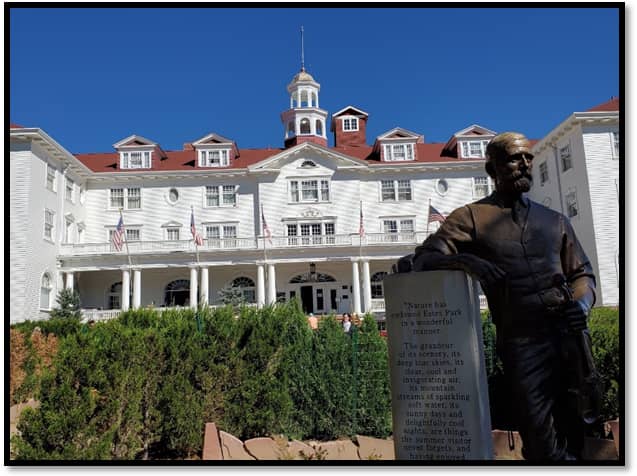 The Stanley Hotel with statue of F.O. Stanley

The Stanley Hotel gives tours several times per day, and we were in the first one at 9am, led by tour guide Carl. First and foremost, the Stanley is on the National Register of Historic Places for a reason. Freelan Oscar Stanley was an American inventor, probably most famous for the Stanley Steamer, a steam-powered automobile. If you, like me, thought that this somehow morphed into the carpet cleaning business a hundred years on, we’re both wrong. It turns out the carpet people absconded with the name, getting away with it legally by changing “steamer” to “steemer.” The original Stanley, who went by “F.O.” had a twin brother Francis Edger Stanley (F.E. of course), who was also an inventor. While F.O. was busy with his cars, F.E. invented “dry plate” photography, which he eventually sold to Eastman Kodak, and which is another story entirely.

Enough to say the Stanley brothers were flush with cash when F.O. decamped from the East Coast to Colorado for his health. The remarkable mountain air made a new man out of F.O., and he and his wife Flora decided to spend every summer in little Estes Park. The problem was that none of their society friends had a desire to rough it in some backwater of Colorado, so in 1903 the Stanley’s decided to build the mother of all guest houses to rival the posh hotels “back east.” The 20-plus guest room building boasted electric lights, telephones and en suite bathrooms. A staff of uniformed servants moved throughout the building via secret passages and a fleet of Stanley Steamers stood ready to drive guest to view the gorgeous surrounding scenery. 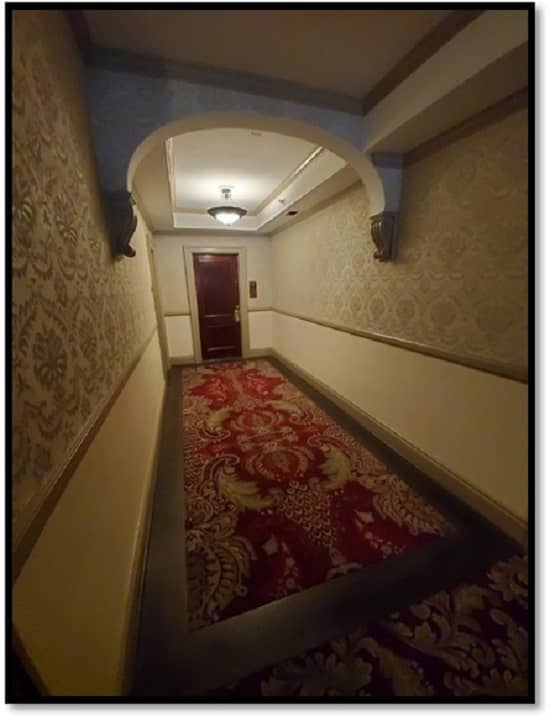 Throughout the next seventy years, the Stanley guest house morphed into a hotel and changed hands several times. The 1970’s saw the once magnificent property fall into disrepair due to lack of investment and poor management. Until the mid-1980’s the hotel still closed during the winter months, when the climate took a toll on the structure, and vandals routinely stole furniture and fixtures. In the late fall of 1974, a young couple with their toddler son arrived at the Stanley asking for a room. The hotel was closing for the season the next day and most of the staff was gone. The manager told the couple that all the rooms had been stripped down for winter and there was no place for them to stay. Outside a blizzard was brewing and knowing a drive into Boulder would be treacherous for a couple with a baby, the manager relented and said he would see what he could work out.

Since its inception, the Stanley had always had a Presidential Suite. Theodore Roosevelt had once stayed there, as had the Emperor of Japan. By tradition, this suite was always ready to receive guests, “just in case,” and it was this room, number 217, which the Stanley manager offered to Stephen King, his wife Tabitha and their two-year-old son Joe. For those of you thinking the haunted room number was actually 237, that was a change for the movie. The Timberline lodge had a room 217, but there too, it was a large and expensive room. Hoping to capitalize on Kubrick’s film, but thinking they’d never attract guests to such costly accommodations, they asked Kubrick to change the room number to 237 which was one of their standard rooms. Kubrick accommodated and the Timberline’s room 237 is booked over a year in advance. 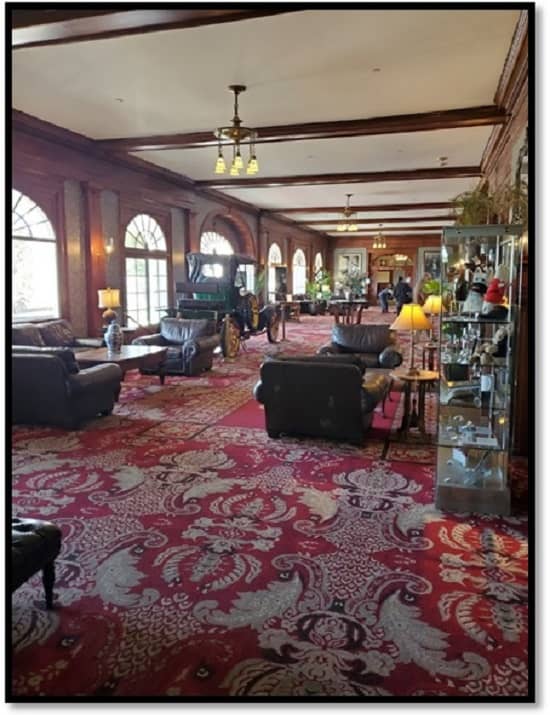 But back to King’s stay. Deep into his addictions by 1974, King, who was fresh off his first success with Carrie, immediately made his way to the bar after settling his family in their room. There he was met by bartender Lloyd Grady (Shining fans will see where this is going), who told King, “Your money is no good here.”

This now famous line was uttered not because bartender Lloyd recognized King, but because the tills had all been closed out for the season, and all the cash deposited. Instead, Lloyd opened a bottle and joined King for drinks, regaling him with some choice stories about the Stanley’s history. 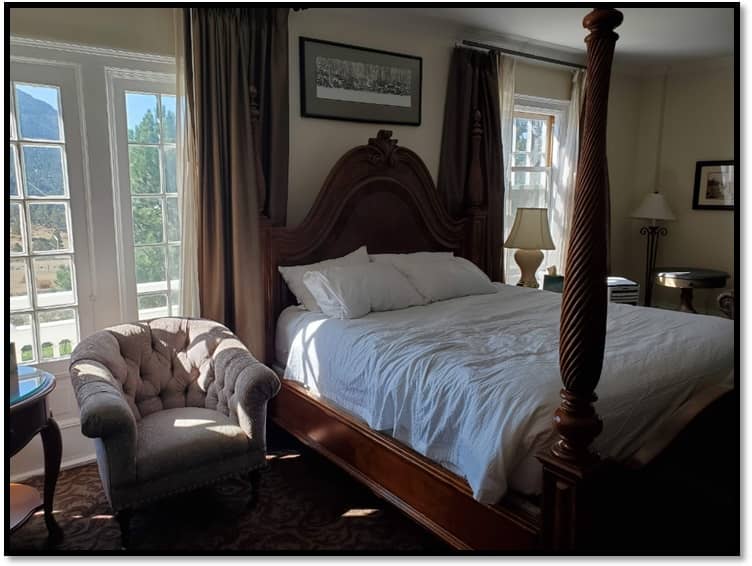 First, Lloyd told King about how the room in which he was staying, had been blown off the hotel. On the evening of June 25, 1911, a thunderstorm cut the power and all of the hotel’s guests were taken down to the lobby while the staff was charged with lighting the back-up acetylene gas lamps. There was an unknown gas leak when chambermaid Elizabeth Wilson entered Room 217 with a lit candle. The massive blast destroyed about 10% of the nearly 70,000 square-foot structure, decimating its entire west wing.

Luckily, the acetylene caused a compression explosion, so it actually put out its own fire, otherwise it would have burned the hotel to the ground. The force of the explosion sent Wilson crashing into the MacGregor Dining Room located directly under Room 217. She suffered two broken ankles, but recovered from her injuries. Stanley paid her all her medical bills and after she recuperated, Wilson was made head chambermaid and worked at the hotel until her death in the 1950s. Lloyd told King that after her death, Wilson began to haunt 217, sometimes by folding guests’ clothing and putting them away. If an unmarried couple is occupying the room, the very proper Mrs. Wilson’s ghost may climb into bed with them and try to force them apart. 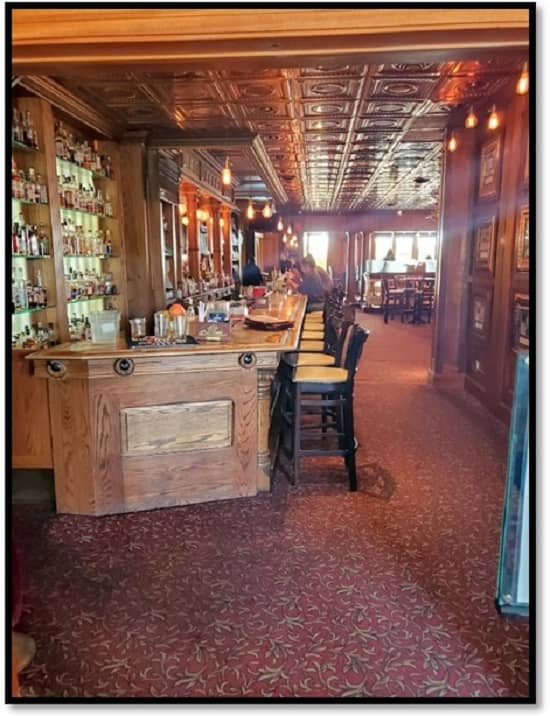 King also heard about the ghost of F.O. Stanley who Lloyd explained is often seen in the lobby and the Billiard Room, which was his favorite room when he was still alive. Not to be left out, Flora Stanley also haunts the Stanley, continuing to entertain with her piano playing in the ballroom. Employees and guests have reported hearing music coming from the room, and when they take a peek in there, they can see the piano keys moving. However, as soon as someone walks in to investigate further, the music stops and no more movement can be seen upon the keys of the piano.

Hotel with a storied past, which closes over the winter? Check.

An explosion at said hotel? Check.

Ghosts, a helpful bartender, and a writer with a drinking problem? 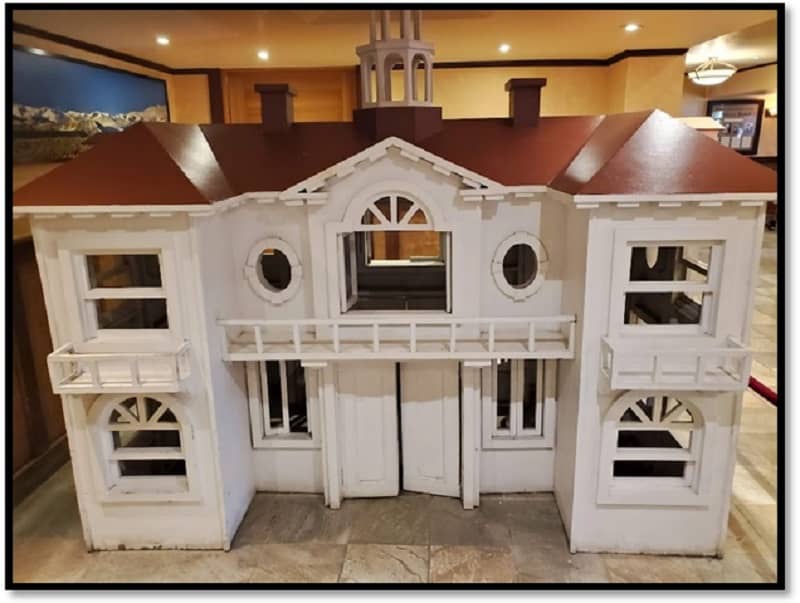 A model of The Stanley used in the mini-series

Our incredibly entertaining tour guide Carl explained that when King returned to room 217 in the wee hours of that snowy morning in 1974, he had The Shining almost fully written in his mind. A year and a half later, the book was published, and another year and half later, Bob Dylan and Joan Baez both stayed at the Stanley during a tour. These events helped keep the Stanley afloat until the early 1990’s when the Grand Heritage Hotel Group purchased it and restored it to a luxury property once again.

Our tour took us to room 217, which is the only way to see it unless you’re a guest at the Stanley. The lovely people staying in there that day let us come in for pictures. The hotel has also been trying for its own hedge maze, catering to fans like me. Unfortunately, it’s been a long project as the local elk population kept eating the hedges. A few years ago, the plants were changed out to ones the elk won’t eat, and the hedges are now about shoulder high.

If you didn’t know, or don’t remember, The Shining was made into a mini-series in 1997, led by King himself. King hated Kubrick’s version of the story and when King undertook the project, he filmed it at the Stanley. The project funded several additional upgrades to the property, including a remodel of the lobby and bar area. The mini-series is not available on any streaming services, but you can watch it here courtesy of the Internet Archive. It’s fun to see the Stanley as the backdrop for King’s story, just as he intended. 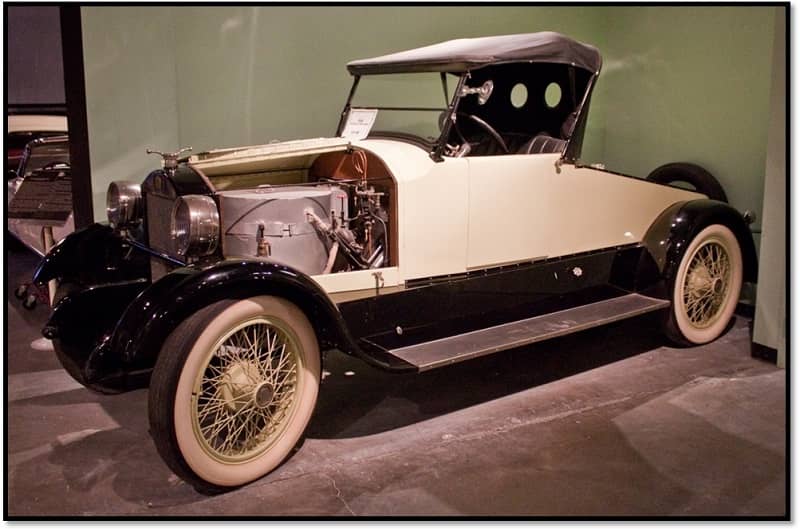 The Stanley fully embraces its connection to The Shining by way of several special events each year; the pinnacle of which is The Shining Ball. This costumed party which happens every October, has now moved up to the new first spot on my goth bucket list. Additionally, I came home with a commemorative sweatshirt and a scarf in the iconic carpet pattern from the movie. I’m also thoroughly enjoying revisiting Doctor Sleep, King’s long-awaited sequel to The Shining which was published in 2013. The Overlook Hotel still figures large in this story. And though King was personally involved in the movie version of Doctor Sleep, consequentially loving it, I feel about this rendition the same way King felt about Kubrick’s Shining.

So that’s what I did on my summer vacation. Now on to the most exciting month of “the season…”

I’ve been to the Stanley a few times. I was with family there once when I ran into a self-proclaim psychic there.

M, I’ll bet you can’t spit a piece of gum without hitting a psychic at the Stanley, especially this time of year. I’m looking forward to visiting again.

One thing purists often point out is that you can’t see the maze in the opening shots of ‘The Shining’ for the simple reason that it isn’t there. That said, the interior isn’t THAT unlike the one in the film.

I was surprised by how King was still drinking when he wrote the book, given the mc is a recovering alcoholic. Maybe his unconscious was trying to tell him something?

Aon, you’re one of my favs for your commentary. King’s memoir called “On Writing” is fascinating. He had a serious coke and alcohol addiction for a large part of his adult life, and literally says he doesn’t remember writing “Cujo.” “The Shining” sequel, “Doctor Sleep” is heavily influenced by King’s life-saving experience with AA. He put a LOT of himself into the adult Danny Torrance.

King seems to take things easier these days – although he’s still pretty prolific – but I’m not sure how he could have written most of his mid-period books without being on some sort of stimulant.

Sue, that sounds like a perfect trip for you. Did your cheeks hurt from too much smiling that day?

JS: I was smiling on the inside. I can’t afford to stretch my cheeks like that…