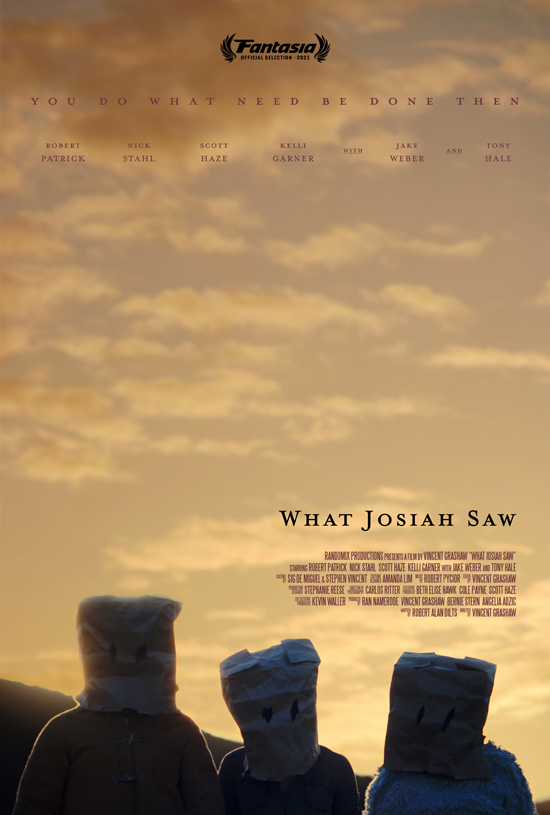 “The Gloom” (“La Penumbra”) is a 14-minute short from Spain’s Dani Viqueira, written by Luis Sánchez-Polack. It follows a young family with a mother, Laura (Lorena Hidalgo), who is in the middle of intense studies to earn her medical degree, potentially useful as her husband Joaquin is a hypochondriac. After a car ride marked by the squabbling of their children Tomás (Jaime P. Barahona) and Rosa (Lucía Hidalgo), Laura is menaced by what appears to be the incursion of the supernatural into the family home. But more may be happening here than meets the eye. In fact the ending’s fairly simple but emotionally effective, especially as it follows an atmospheric and involving horror sequence. The movie’s a very solid piece of work.

Bundled with it was the American feature What Josiah Saw. Directed by Vincent Grashaw and written by first-time screenwriter Robert Alan Dilts, it follows the family of one Josiah Graham (Robert Patrick, the T-1000 himself). Josiah’s three kids are adults now, in their 30s or thereabouts, and they’ve taken different paths in life. The movie opens somewhere in the southwestern US, with oil men talking about buying the Graham homestead; we then follow the youngest child, Thomas (Scott Haze), living on the old family property, overseen by the patriarchal Josiah. This first act establishes an uncomfortable, horrific atmosphere with some notably disturbing moments.

Then we move to Thomas’ brother Eli (Nick Stahl), a gigolo and drug dealer who gets wrapped up in an underworld deal that leads him into a violent confrontation with some Romani gangsters. That subplot takes up most of the second act, then we cut to Eli’s twin sister Mary (Kelli Garner) whose marriage is under stress due to her mental issues, in turn probably caused by the torture of growing up in Josiah’s home. Eli and Mary, learning about the oil deal, then travel to their old home where secrets come out and, I think it is no spoiler to say, blood is shed.

The structure’s interesting, but the execution’s more hit-and-miss. The film has the feel of an anthology, which isn’t bad, but it is difficult to view it as a cohesive story because the different parts have such varying length and varying kinds of action. Eli gets an extended drugs-and-violence underworld story; Mary gets a story of a suburban housewife confronting mental issues, which is barely given a narrative shape. Generally I felt that Mary was underdeveloped as a character next to her two brothers, which is odd as much of the family drama of the Graham clan turns out to revolve around her.

But let’s consider Eli’s story a bit more. To begin with, it has to be said that it jumps right into common negative stereotypes about the Romani (for example, by always referring to them with a common exonym slur). The group that Eli encounters are not only criminals and fortunetellers, but literal child-stealers. I do not understand what the movie was doing in using these tropes with apparent naïvité, unironically and so far as I could tell uncritically. But then I’m also not sure this section of the movie was meant to have literally happened.

The film makes aggressive use of subjective point-of-view. Each of the Graham children has issues in seeing reality directly. I note that the whole plot with the Romani has nothing to do with the rest of the movie, and certain bits of continuity make me think it was meant as a dream or hallucination. The problem here is that I’m not sure, and it’s a major part of the film. Frankly, I’m not sure what the movie gains either way; in either reading it doesn’t do very much to build Eli’s character.

It also is less original than it should be. The whole movie has a vague sense of a Joe R. Lansdale knock-off, and something about the twisted Americana of carny Romani gangsters brings that home. What ought to be one of the more distinctive bits of the film instead points to a borrowed feel. More generally, a lot of the devices here — the subjective points of view, adult siblings returning to the home where they were traumatised as a child — never becomes distinctive. Consider the foregoing in relation to the Netflix adaptation of The Haunting of Hill House; those points are general enough they don’t have to call that particular story to mind, and yet they do. There’s a twist in the final shots, I thought a poorly judged twist on its own terms, that reminds one of an element in a recent well-known TV show. Put it this way: the movie’s choices keep reminding me of other stories that made similar choices, and I’m not sure that had to happen. It should have been possible to make those choices and feel more original.

Now, that the movie works at all is a function of strong directorial work by Vincent Grashaw. The eerie soundtrack is used well. Camera moves give us the geography of settings while also establishing atmosphere. Deep shadows drown the film in darkness without somehow being obtrusive. Above all, there’s a vacancy to the Graham’s home, a sense of emptiness, that is completely different from the rest of the movie. As an exercise in style, this is supremely effective. And more that that, the performances are fine. In particular, I thought Kelli Garner gets as much as possible out of what the script gives her. And Robert Patrick is phenomenal, a drunken force of nature spitting out bizarre prophecy and patriarchal commandments.

It’s odd, in fact, that his Biblical rants never really seem to set up a theme that flavour the rest of the film. (I wondered whether the Graham surname was meant to invoke the oddball minister Sylvester, of cracker fame, but saw no clear connection.) I imagine it’s possible to read Josiah’s rants as resonating through the movie, but I didn’t notice anything developing from his speeches beyond fairly general ominous foreshadowing. In fact Eli and Mary also run into ominous foreshadowing in their sections of story, and in no case does it feel like it has any particular meaning, even when in retrospect it’s pointing to specific plot points. The sense of a supernatural inflection to the real world never really comes to have any thematic meaning.

Which I suppose is the real problem with the film: I wasn’t convinced it had much to say thematically. If I had to guess at what kind of subtext is meant to give heft to the story, I’d say this is a tale about the nightmare of family and the search for salvation. There’s something in there also about bad deals, maybe, as the oil deal triggers the literal digging-up of old secrets. In my opinion none of this really lands, and nothing binds the movie together. The structure’s fine, the visual sense and atmosphere is excellent, the actors are good to great, but weaknesses in the script means it doesn’t hang together.