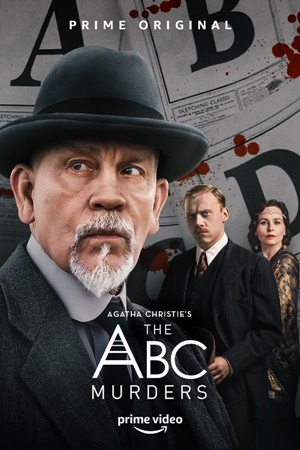 And, we’re back!! Black Gate had some difficulties and was offline for last week’s regular spot, but the world is back to normal. Well, not really, but I’m here on Monday morning, anyways. I was really torn on what to write about for today’s column. Obviously, the final vote was in favor of The ABC Murders, starring John Malkovich. But it was a near thing. Recently, I watched the first couple episodes of Thunder in Paradise. That show, which is classic nineties Gorgonzola, was a tame version of the big budget action films of the era. Hulk Hogan and Chris Lemmon (Jack’s son) are ex-Navy Seals with a prototype speedboat that is a Kit-light (for you Knightrider fans). But that turned out to be an essay for another day.

So, it’s Amazon’s three-part take on the 1935 novel. It aired in 2018, and Malkovich was 63. Of course, he has always looked a bit old, and he conveys Poirot’s weariness quite well. This is a Poirot past-his-prime.

THERE BE SPOILERS– You can go watch this on Amazon. It’s not hard to find. I try to write no/low-spoiler essays, but sometimes you gotta say what you gotta say. If you’ve not seen this version, and don’t want any surprises (and there are a few), go watch it before reading on. – END SPOILER ALERT

The opening scene involves Alexander Bonaparte Cust arriving at his reserved lodging house. The female landlord is a blowzy matron who arranges sex with her daughter for the tenants. It’s a depressing scene, and that mood pervades the entire series. This is a much darker Poirot effort than ones we’ve seen featuring Suchet, Ustinov, Finney, and Branagh (and others). It’s got more of a Dostoevsky bleakness to it than the typical Poirot.

Which brings us to the man himself. If you’ve seen David Suchet in Curtain (the last novel published, but written 35 years prior), you have a visual image of Poirot at the end of his life. Elephants Can Remember was the prior novel, published 52 years after the first. I don’t picture Poirot in his seventies or beyond in that book. Granted, my mind sees David Suchet, or hears John Moffatt; and he’s not ‘old.’ 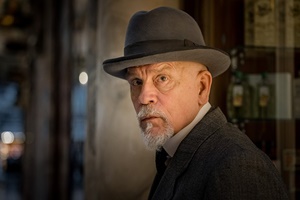 Malkovich gives us a Poirot pre-Curtain, but later than we usually see him in the midst of his career (or retired and battling vegetable marrows). Poirot still lives at Whitehaven Mansions, but there’s no Hastings, or Miss Lemon, or George. He lives alone, fastidiously shining his shoes. Malkovich has a ‘normal mustache, turning down into a very neatly trimmed goatee. The goatee comes to a point in the middle, and is shaved clean on each side. Otherwise, it would like look mine.

It has gone to gray, and he dyes it each day. It actually begins to drip as he talks with someone, and embarrassed, he stops coloring it. I think this element perfectly captures this Poirot. He is still the intelligent, trained detective, but he is an old man, alone. Inspector Japp is retired, and dies of a stroke while Poirot visits him. Inspector Chrome, Japp’s replacement, dislikes Poirot. He is rude and dismissive and threatening. He ‘invades Poirot’s privacy’ in a way previous Scotland Yarders had not.

Malkovich uses a cane, though he does not emulate Suchet’s small-stepped walk. Which is fine. Suchet was a tremendous Poirot, but successors do not need to imitate him. Ideally, they’ll follow Christie’s’ cues, though. Malkovich’s head is not egg-shaped, but he’s certainly bald. His appearance is neat, but we see him ‘dressed down’ at home.

Unless I missed it, Malkovich does not once mention ‘the little gray cells.’ And there’s no discussion of psychology. I think leaving that out is a missed opportunity to align his interpretation with our mental images of Christie’s creation. Not everyone will feel the same way, but as a storyteller, I certainly do. It leaves an unnecessary distance between Malkovich’s Poirot and the viewer. Depicting a beloved and well-known character grants less freedom than an actor might otherwise have.

But Malkovich carries the series with his performance. I think he created something new, without completely straying from the Poirot that Christie created.

Emaon Farren is really something as Cust. I wondered if he was demon possessed for part of the series. He’s incredibly creepy, and we learn that he has a brain tumor and suffers from seizures, blackouts, and constant headaches. There was a scene which I thought was going to be sex, but it wasn’t. It was so disturbing I actually covered my eyes until it was over. You’re not going to forget Cust from this one.

Andrew Buchan is Franklin Clarke, brother of the murdered Sir Carmichael, and he hires Poirot. Buchan was Mark Latimer in the fantastically dark Broadchurch. He’s a multi-dimensional character here and turns in a strong performance. The rest of the cast is good, and I found myself kind of hoping some were either the killer, or would be killed. They’re not very likable.

A thread that weaves through all three episodes relates to Poirot’s backstory. There is no proof that he was a police officer in Belgium. And we see flashbacks that indicate bad things happened to him when the Germans invaded. Also, he is still Catholic, but his faith is damaged. Probably related to the backstory.

It’s quite a revelation near the end, and it’s certainly not Canonical. But it absolutely delivers an impact. And it doesn’t damage the story. It’s definitely a takeaway from this adaptation. 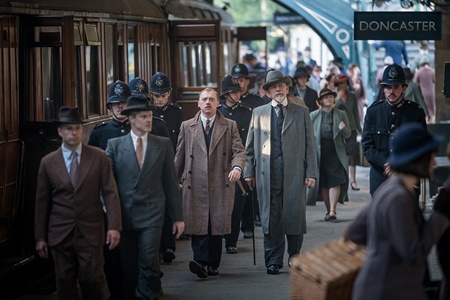 You want non-Canonical? The CBS radio show Suspense aired The ABC Murders on May 18, 1943. Charles Laughton (who was terrific in the under-appreciated noir, The Bribe), starred. But he wasn’t Poirot. In fact, no one was. Yep – CBS adapted the story without keeping Poirot. I’ll let you listen on your own to form your own opinion.

The premise of the murders, and the murderer, follow Christie’s novel, but there’s a lot of wiggle room within those aspects. Overall, I think it’s a depressing mini-series, and I doubt I’ll sink three hours into watching it again for quite a while. But Malkovich is a bright spot.

It’s written by Sarah Phelps, who seems to be the official Agatha Christie adapter these days. She has written five such productions in the past six years. She definitely has a ‘modern’ style, and her work is more for the modern audience, than for traditional Christie fans.

Suchet was perfect. And I liked Kenneth Branagh. On the other hand, I thought Albert Finney was a parody, not a pastiche. Malkovich creates a sadder Poirot. It fills in a gap, and I think it’s worthy. Honestly, it’s just such a bleak mini-series that I can’t heartily endorse it. I like it, and I’m glad I watched it, and I’d like to see more Malkovich as Poirot, but I don’t really want to sit down and see it again. So, something of a mixed endorsement.

But kudos to Malkovich for coming up with something new for an institutional character.

So glad Black Gate is back! And you, Bob, of course. I prefer Suchet to Malkovitch when it comes to Poirot, so I’m not sure I’ll try this, even if it is one of the best of the novels.

Suchet is the best, but I’m willing to try out any Poirot. Even that awful Tony Randall film (Once only, though!).

oh man, back when i was a teen my mother got really into radio shows, and i still have very fond memories of Suspense, and of course stuff like The Whistler, The Shadow, and there was another one i could never remember that was mystery with horror overtones. i know some audiobook publishers still try to make radio show-esque versions of books but i havent jumped into those yet.

Silentdante- The Poirot radio plays with Moffatt, the Holmes ones with Clive Merrison, Dirk Gently’s Holistic Detective Agency – there are some really good ones out there. There’s a LOT of the old Lux Radio Theater (they usually adapted movies) shows on the web.

silentdante, you may be remembering Inner Sanctum, which was a combination of mystery and horror.

you know you may be right, looked Inner Sanctum up on audible, going to try one of the collections. thanks!