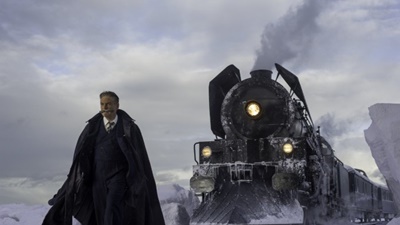 While I have read a lot of mysteries by a lot of different authors, I’d never cared for Agatha Christie. When I began watching David Suchet’s masterful performance as Hercule Poirot (which I’m SURE you read about here at Black Gate), I had never finished a Christie novel. I just didn’t like her stories and there was way too much out there that I’d rather read. However, because Suchet was simply amazing, I became a Poirot fan and I read all of the short stories. By picturing the actors and settings from the television show while I read, it worked for me.

My frame of reference for Poirot is episodes of the Suchet television show, not Christie’s original stories. Unlike Doyle, Stout, James Lee Burke, Tony Hillerman, Frederic Nebel and many others whose work I admire, I still am not interested in Christie’s writings. So, I like Poirot, but not Christie.

I wasn’t sure what to think of the new big screen Murder on the Orient Express, which I saw at 10:50 AM on opening day. On the one hand, I thought that Kenneth Branagh’s moustache was completely ludicrous and a huge strike against the move right out of the gate (I mean, who in the world thought that was a good move? Did Mark Gatiss have a hand in this?). On the other hand, it was Branagh’s amazing Shakespeare films that made me a fan of the Bard. He is a wonderfully talented actor. And this film, which he produced, directed and starred in, was his labor of love.

Tackling Christie’s most famous story is like taking on The Hound of the Baskervilles: expectations are extremely high. And the Suchet version isn’t that old, having been made in 2010. And the Albert Finney version included Lauren Bacall, Vanessa Redgrave, Sean Connery, Ingrid Bergman and more. Branagh was taking a big bite. How did he do?

Readers of the books must suspend disbelief. Christie describes Poirot as only 5′-4″ with a head shaped perfectly like an egg and a precise moustache. Branagh is built more like Sherlock Holmes than Hercule Poirot. And his ‘stache belongs to a bartender in a wild west saloon. But I can set that all aside. He makes a good Poirot. His laughing aloud while reading Dickens is proof that this iteration is more good natured than Suchet’s and Christie’s Poirot (again: I did read the fifty-ish short stories).

His accent is easy to understand, which is useful for a two-hour movie. Christie’s Poirot has an overbearing ego – Suchet played that down a bit. Branagh has confidence but doesn’t go all Benedict Cumberbatch (thank Heavens!). He’s not Christie’s fat little Belgian or David Suchet’s serious Poirot, but I think Branagh does a nice job of creating an acceptable version that is still recognizable.

Johnny Depp was pretty well cast as Ratchett and I’m not familiar with Tom Bateman but he made a good Bouc (fills in for Hastings in this story). Michell Pfeiffer, who stepped back from her career to raise her children, plays her part well. The rest of the cast more than holds their own. I don’t think there was an Achilles heel.

Having not read the book, the script doesn’t seem to have taken too many liberties. There was a curveball near the end that surprised me, but it all fit together. 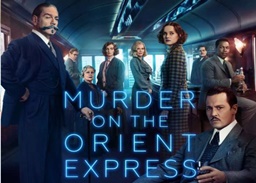 Visually, the exterior scenes were outstanding. Overhead angles were used for some of the interior scenes: I’m still not sure what I think of that. But even though the movie faces the constraints of taking place almost entirely on a train (reminds me of the Basil Rathbone film, Terror By Night), it’s clearly a big budget effort.

If this movie had been a festering pile of crap (like season three of BBC’s Sherlock), I could go on about all the things it did wrong. But this was a solid adaptation of a famous novel that is over eighty years old. Strong cast, visually appealing, pretty faithful to the source material, and a believable, if not strictly factual, Poirot.

If you have already read the book or seen a prior movie version, you know what happens. If you haven’t, I’m not going to spoil it for you. I recommend seeing this film. And seeking out the David Suchet version on the Internet (Netflix recently dropped the entire series. Pfui!).

There was also a reference at the end of the movie to another famous Poirot novel. I’d be quite pleased if Branagh decided to don the moustache (well, maybe less of one) again and film a sequel.

And because I never miss an opportunity – One of August Derleth’s latter stories about Solar Pons was “The Adventure of the Orient Express” and included guest appearances by Poirot and Simon Templar, The Saint.

As a life-long Agatha Christie fan I agree Branagh made a fine Poirot (including the ridiculously groomed mustache). The star-studded cast hearkened back to the earlier Christie adaptations which took a similar approach and I hope they carry on and do more.

Just a note about the reference at the end of the film when the police need Poirot in Egypt because of a murder – it would be wrong if we all got excited about a remake of “Death on the Nile” since Poirot shows up that time Egypt long before the murder takes place. This is most likely a reference to a Poirot book which came out after “Murder on the Orient Express” (1934) – “Murder is Mesopotamia” (1936).

Whatever direction they go, the Christie stories are timeless and probably more sought after than ever as period pieces by those of us having Dowton Abbey withdraw….

Well – I still think it’s ‘Murder on the Nile’ because with this kind of budget (I think it was 55 million – not the original $155 million I typed), they’re going to be far more interested in familiar titles than chronological consistency.

Having said that, I wonder how many Poirot films he’s interested in doing. He’s a pretty well-respected actor. Does he want to get Rathboned into a role at this stage of his career?

It’s not about the chronology of the books. Death on the Nile had Poirot in Egypt before the murder which is actually an integral part of the plot. He’s on the river cruise when the murder takes place. At the end of this movie the policeman says Poirot is wanted in Egypt because of a murder. It doesn’t fit unless they blow up the whole Death on the Nile plotline, in which case I wouldn’t bother anyway.

Branagh could produce other Christie movies and create a franchise in that way without always playing Poirot. It will be interesting to see where it goes.

Sue, I think it’s likely they’ll do what they did with Murder on the Orient Express, which is have a “Prologue” crime that Poirot investigates in Egypt, and then move on to the ship and the crime in the novel. They seem to be setting up a sort of “James Bond” pre-credits teaser type of structure. I am 99.9% certain they’ll do Death on the Nile because it’s such a well-known property.

Unless Poirot is going to time-travel so they can do Death Comes as the End, and I am totally down for that.

How awesome would it be if they did Death Comes as the End – seriously. But I get your point. There is probably a pre-story of some sort to get him there.

Which is a bit of a reprise of the Seventies movies, where Death on the Nile (1978) was the big release following Murder on the Orient Express (1974). Just not changing the star (Peter Ustinov took over for Albert Finney) this time ’round, I surmise.

I’ll be a lot more confident once Branagh signs, since he starred and directed.

“Having not read the book, the script doesn’t seem to have taken too many liberties.”
How could you possibly know one way or the other?
For whatever reason, I have always preferred the Poirot short stories to the novels, while, with Miss Marple, it is the reverse.