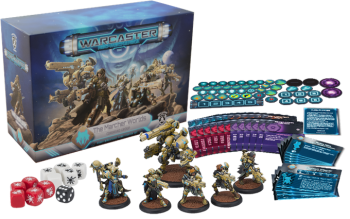 Last spring, I spent some time discussing the Kickstarter for Privateer Press’ new game, Warcaster: Neo-Mechanika. The game is something of a spin-off from their popular Warmachine miniature wargame, which allows players to field an army that includes hulking metallic warjacks. Warcaster is set thousands of years in the future, in a distant galaxy, where human refugees from the Warmachine setting have set up home, technologically advanced, populated the galaxy, and, not surprisingly, found new and more impressive ways to kill each other.

To get you up to speed on the setting, the game is played in battles of armies composed of three different factions that have ample reasons to fight against each other:

That initial Kickstarter has been fulfilled, with a surprising amount of speed given that their production facilities had to deal with a pandemic lockdown for COVID-19. I’ve now had the chance to play through the game several times, to develop some more detailed thoughts on the game … and let you know about their next plans for the game, including a current Warcaster: Collision Course expansion Kickstarter that ends at 3 a.m. Eastern Time on Friday, November 6. You can buy any of the factions’ existing or new products through the Kickstarter, but they’re also available through the Privateer Press store or your local game store.

One thing that immediately becomes apparent when playing the game is that you don’t want to get particularly attached to any specific unit. The goal of the game is to score points by securing mission objectives every few rounds, and the game is designed with the idea that sacrificing units to do this is completely acceptable. While every miniature game can include some sacrificial strategies, Warcaster allows you to bring killed units back into the game in subsequent turns, possibly in a more beneficial location.

This works through the application of the game’s main resource, Arc (short for Arcanessence). The premise of the game is that while your troops are in battle on a planet, you represent the distant warcaster, a sorcerer-general who is jacked into a massive battleship in orbit, and can fuel your combat by channeling Arc into the neo-mechanika technology of warjacks or battle armor in your troops. While troops are charged with Arc, they get special abilities and can spend the Arc (“spike” it) in order to generate unique powers, as outlined on each unit’s stat card. Each player has a total pool of 7 Arc available to them, and as Arc is spent it returns to your pool of Arc points.

But Arc can also be used to bring new units into the game. In addition to powering troops, Arc can be used to spawn and power Void Gates. The Void Gates are then used to bring units from you roster of characters into play on the game board near the Void Gate. As units are destroyed, they return to your roster, meaning that even if you own only a single version of a solo model, you can keep generating it back into the game after it gets killed off.

This creates a more fluid style of play than many other miniature games, where you want to keep characters with useful abilities particularly safe until the key moment for you to activate their ability. With this dynamic ability to recall units, exposing a unit on one side of the battlefield to take a strike at the enemy is a lot less harrowing if you know that the death of that unit will just mean that you can soon return it on the other side of the battlefield to provide a flanking attack against the enemies there.

Of course, the enemy can attack and destroy Void Gates, which that can hinder your plans.

Another interesting feature of the game is the warjacks. Players of Warmachine are familiar with the basic concept of a giant mechanical construct that attacks the enemies, but the major change in Warcaster is that they come not with a single weapon loadout. Instead they have an assortment of weapons that are set at the beginning of the battle. Getting this to work logistically on the models requires developing some proficiency with using small modeling magnets, something that prior to this foray I had only dabbled with. But it allows you to design warjacks that are customized for certain types of attacks, perhaps one warjack that is more of a melee brawler, one that is a long-range sniper, and one that hurls mid-range missiles at enemies. (You could, of course, just glue together specific designs of warjacks that you want, if you don’t want to mess around with the magnets or customizing at each game, particularly if you have a specific strategy that you think you’ll use over and over.)

Warcaster games are very well-balanced so that they seem to end at a fairly appropriate time. I’ve played many miniature games over the years that seem like they can go on forever … even after it’s pretty obvious who is going to win. Warcaster uses a series of “Pulse rounds” to help limit this. In a full game, a Pulse round last five rounds. In a skirmish game, it lasts three rounds. The end of a Pulse round signifies when the scoring phase takes place. Games of Warcaster typically run three Pulse rounds, so there will be typically three scoring phases throughout the game. This also means that the total game length of full games is 15 rounds, with skirmish games coming in around 9 rounds of play.

Because the scoring is built around claiming objective tokens on the map, it’s also generally the case that no one in the game gets so far ahead of the other player in points that a reversal of fortune is completely impossible. 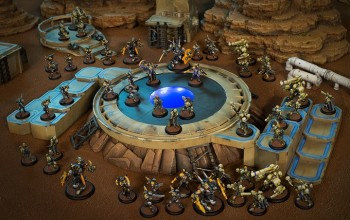 One other component of the game that helps contribute to the fluidity of play are the Cypher cards. This is a deck of cards that each player builds before the game, which can provide various benefits to squads, warjacks, or units, or can be used to issue a direct magical attack. One Cypher card is played before troops activate and then one afterward, and you replenish your hand up to five cards at the end of the turn.

All of this results in a dynamic, strategic, and exciting game that gives a lot of satisfaction in a reasonable amount of time.

Now for the reality check …

This game certainly isn’t for everyone. The models do come unassembled and unpainted, so as a hobby this is almost as much about the artistic act of creating your army as it is about learning the rules of the game. My Marcher Worlds army has been assembled and covered in a coat of primer paint, but I haven’t yet figured out the exact color scheme that I want, so I haven’t begun painting them yet. To get the most out of the game’s flexibility, you will likely want to magnetize the warjack weapons, so you can swap them out for different games. Since these are metal pieces, some of the smaller magnets may not hold them in place particularly well, so you may have to experiment with a couple of different magnet sizes.

Miniature gaming is also a fairly pricey hobby. You can buy yourself into a skirmish set of Warcaster relatively cheaply, but eventually you’ll want a couple of different loadouts of heavy warjack, and some different units. This can build up pretty quickly, even before you get to the new models they’re releasing in the current Kickstarter (more on that in a second).

And, of course, this is a game that requires the ability to play with others … and with most game stores having limited or no open gaming space at the moment, let alone running full tournaments, that makes it a particularly hazardous time to be launching a new miniatures game. However, if you’re like me and avoiding social occasions to spend time at home, it does give ample time to work on assembly and painting, in preparation for the day when we can get together at conventions and game shops again.

With the first Kickstarter fulfilled, Privateer Press has quickly advanced to get the Kickstarter for their Warcaster: Collision Course expansion up. At just under one week, it has raised over $161,000 with over 750 backers as of this writing. So this expansion will definitely be produced, and if you’re going to buy into the game at all, the Kickstarter is a great way to get a complete set with a discount and some bonus accessories.

There are two major additions to the game mechanics coming into play with this Collision Course expansion, along with 24 new Cypher cards (or possibly more with stretch goals).

The first major addition is a new faction, the Empyreans. These alien creatures are the natives of the galaxy, pushed out of their natural place as the human refugees spread from world to world, claiming the Empyrean resources an alien technology for their own. Long dormant, the Empyreans are now retaliating, with robotic constructs and their disembodied souls housed in mechanical constructs, to preserve the Arcanessence that is being depleted by humans more quickly than it is being generated. Since the Empyreans evolved in a galaxy teeming with Arc, they have a natural ability to channel Arc, and have various abilities where they are able to gain and utilize Arc in ways that are less restricted than the human factions. For a pretty slick look at this new faction, check out this Empyrean faction overview on YouTube and you can see the Starter Set unit cards in this Kickstarter page update. 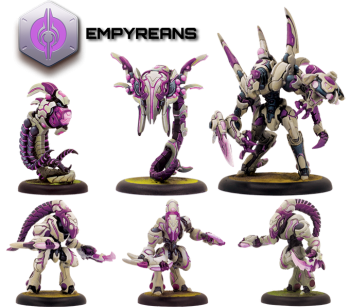 The second major addition is that all of the factions, including the Empyreans, are getting vehicle units added to their faction. Aside from being larger models than the existing units, the vehicles also include some new rules within the expansion.

At the $200K stretch goal, which is almost certainly going to be met within the next week of funding, they will add a “Race Mode” into the game expansion, along with a set of race mats that go along with it. The two vehicles in the race move along three mats, from the rear edge to the leading edge. When they hit the leading edge, the rear mat moves up to become the new leading edge … and any models on the rear mat are lost. The full details of this new mode are still shrouded in mystery, but it definitely looks like it would be a fun new way to engage in the game.

On top of these major additions, each faction is getting a new squad as well as attachments that can go on existing squads, and some unique hero solos that can work for multiple factions.

I’ll be honest, beginning this Kickstarter immediately after the fulfillment of the original Kickstarter during a pandemic seems to have some strategic issues. For example, while I enjoyed the game, I’ve only been able to play it by myself and with my 15-year-old son, and even then I’ve only played it a handful of times, and I don’t know when on the horizon I’ll be able to play it again. I already spent over $150 on it this year, and I certainly haven’t yet gotten anywhere near $150 of satisfaction out of the game yet.

Those issues aside, though, the Kickstarter funded in a day and after a week has more than doubled the funding goal. This likely won’t blow out any Kickstarter records – in fact it may not even match the original Warcaster Kickstarter from the spring – but it’s clearly successful, and a great way for existing players to expand their collection while new players have a chance to jump on board. There’s no better way to get into this game, the vehicles, or the Empyreans faction … so check it out.