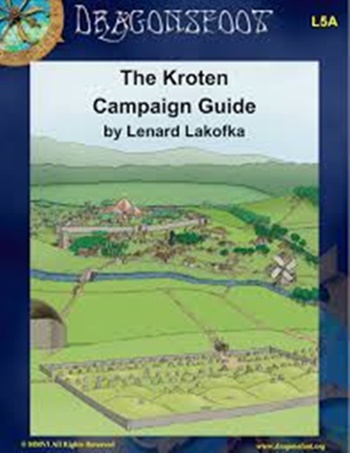 Bone Hill came out in 1981, and it was followed two years later by L2 – The Assassin’s Knot. That was an entirely new kind of adventure, in which the Baron of Restenford has been murdered. The characters have to find out who killed him. And if they don’t do it quickly enough, more citizens of the town can die, and there may be an invasion from an aggressive neighbor.

The action takes place in a new town, adding to the Lendore setting. Garrotten has a bad reputation as a dangerous place. And since Lakofka creates an assassin’s guild (a new concept), it’s well-earned. It’s written for 6-10 players, which is certainly unusual by today’s standards.

Murder-mystery modules were unknown at the time, and Lakofka was breaking new ground. We’ve literally seen everything over the past fifty-ish years. It’s hard sometimes, to truly appreciate the groundbreaking stuff (I played Dave Megarry’s Dungon! yet again, over the weekend. What he did was simply astounding). And L2 was innovative and a trail blazer.

L3 – Deep Dwarven Delve, became a famous ‘lost’ module. Gygax lost control of the company to the Blumes and Lorriane Williams. Gygax’ creations, and his friends, became persona non-grata at the company. Lakofka had never become a TSR employee, but he might as well have been hired by Gygax.

Lakofka completed the module, but it was buried somewhere in the TSR vaults (think Raiders of the Lost Ark) and forgotten. It was finally released nearly two decades later in 1999 as part of D&D’s Silver Anniversary. Lakofka has said that version was only 80% of the original TSR revised/edited edition. I don’t have a copy of this one, but I recall that, especially compared to L1 and L2, it’s a straightforward dungeon crawl, where the characters free some dwarves from thralldom. 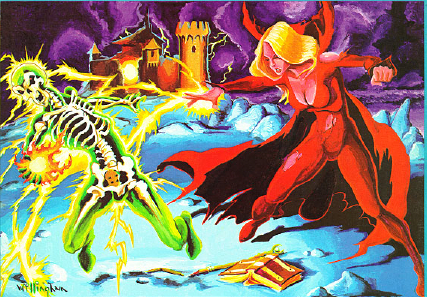 Lakofka continued the Lendore Isles saga years later. He was an active participant in the Dragonsfoot community, which perpetuated old school D&D versions, including AD&D. L4 – Devilspawn, came out in 2010, for free. Volunteers from the Dragonsfoot community helped edit drafts. The whole project is a pretty neat testament to what’s good about role playing.

Devilspawn is a stand-alone module, though it can also be played as a sequel to L1 – L3. At 137 pages, there’s a lot to play with. Restenford has been attacked by a band of humanoids. Surrounding areas shortly suffer the same fate. There’s a timeline of events to move the players along. Several communities are detailed, adding more to the Lendore world. But you ain’t seen nothing yet!

Lakofka continued developing Lendore material. And in 2013, L5A – The Kroten Campaign Guide was released, free, through Dragonsfoot. It’s a 156 page treasure trove of material to add to your adventures in Lendore.

Bear in mind that all of the L5 stuff is completely free. You can get PDFs of L1 through L3 for about $15 total. That’s a TON of inexpensive content from one of Gary Gygax’ contemporaries.

And let me just add a Len quote from a Dragonsfoot Q&A in 2010: “Psionics are a pain in the ass.”

L1 and L2, combined with L3 through L5, let you build an old-school campaign, with a lot of provided material. It’s similar to what Creighton Broadhurst has done with Raging Swan Press (I’m a BIG fan!).

Here is a two-hour Zoom with Lakofka, from just last year. Put it on the background and listen.

Another of the founding fathers of RPG has passed. We are fortunate that Lakofka continued creating in his style, for well over two decades after leaving TSR.

*Some of this info came from Shannon Appelcline’s Designers & Dragons FB post on Lakofka’s death. Shannon’s page (and books) are must-reads for RPG fans.

I shall not cast “Leomund’s Tiny Hut” again without thinking of Mr. Lakofka. Loved reading how he kept the Lendore Isles setting alive and kicking, long after TSR itself was but a memory. I wish you many happy hours of gaming in Restenford, Mr. Byrne!

Eugene – It is pretty neat that Lendore was ‘what he wanted to do.’ So, after TSR cut ties, he probably kept playing, and developing his own world, and wanted to keep sharing it.

I went back and re-read Bone Hill for this post. I like that he created a mini-campaign area.

And additional Lendore material inspired by Len can be found at the Restenford Project http://restenford.blogspot.com/

Steven – There are some cool maps there. That’s neat! Thanks. You are truly a font of information. Some of it even useful.
🙂

Ah, “Bone Hill” has always been one of my favorites, and I always suspected that there was something more to it. A part of a larger whole!

True story (and semi-spoiler alert) in “Bone Hill” there is this weird lightning-staff, not a wand of lighting, but something else. Anyway, all through the late 80s and very early 90s, one of my players foiled so many of my designs by saving those charges like they were gold! I would forget all about it, and he would just hold onto it like an ace in the hole.

Adrian – It’s neat that there were people creating home campaigns for their games back in D&D’s nascent days. No internet sharing – just pockets all over the country, developing their own aspects of this new, growing game.

I had the Arduin Grimoire books, which were one type.

And Lakofka was clearly making something big with the Lendore Isles.

RIP, Len Lakofka. I have an old copy of L1 and it’s great. Got Bill Willingham to sign it at a Con a few years ago; it was apparently his first published cover. Len was an excellent writer and his Leomund articles in Dragon were generally a must-read.

Jim – I liked the Leomund column as well.

[…] (Black Gate): Lenard Lakofka has passed away. Lakofka was one of the early figures in the history of Dungeons […]