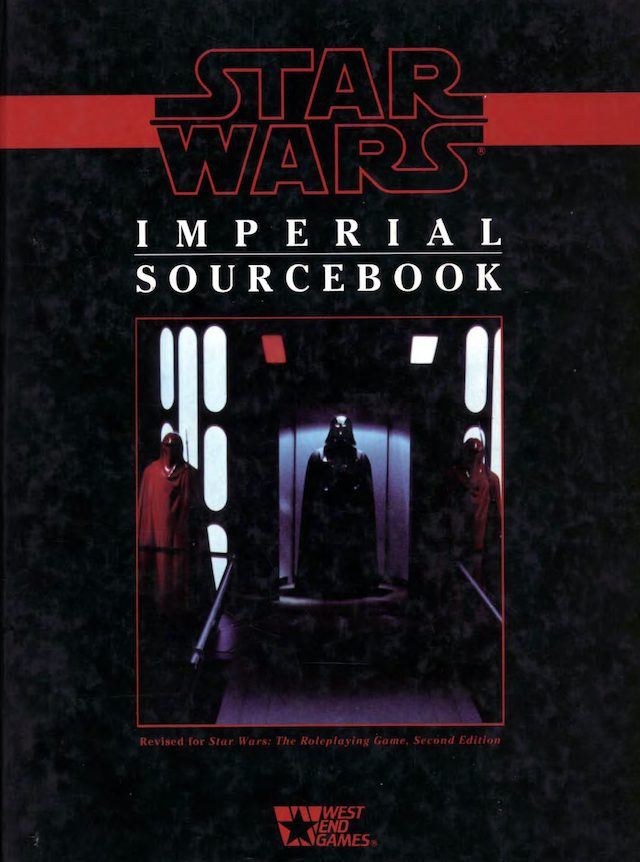 Since Disney’s acquisition of Star Wars and its consequent films and streaming episodic shows — the very good The Mandalorian being only the first of several planned — many would be forgiven for forgetting the very long time between The Return of the Jedi and The Phantom Menace. 1983 to 1999. In that time, novels and comics were the primary vehicle for keeping Star Wars stories going, including the Thrawn Trilogy of novels by Timothy Zahn, published from 1991 to 1993.

For roleplayers, West End Games published a Star Wars role playing game in 1987. This game proved to be successful, and the quality of the material was so good, that Zahn referenced — at the instruction of LucasArts — the sourcebooks when writing the Thrawn Trilogy. With the game, players could finally engage in the universe and with supplemental materials to help expand and frame the universe that was — until that time — largely confined to the original trilogy of films and a poorly received Christmas special. 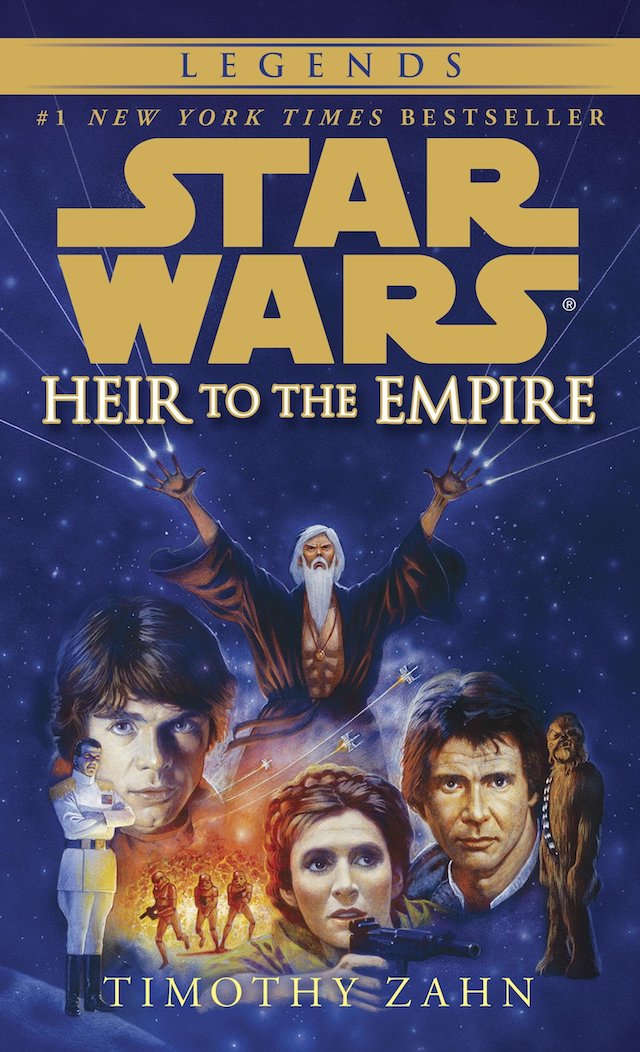 Officially non-canon now, the game still helped to set much of what we think of as Star Wars, and much of the canon material leverages the work of West End Games, even if they do not realize it.

The Imperial Sourcebook is one of these classic books that West End Games put together to help flesh out what the Galactic Empire was, maintained its hold, and also revealed it a less monolithic in its day-to-day operations. The book sets itself as a compilation of material that the Rebellion has managed to acquire and put together but that cannot be altogether trusted 100% because getting the material was often a matter of analyzing intelligence or making guesses about how things worked.

In game terms, this allows the book to be a source of material while not confining the game master (GM) to the explicit statements in the book. If you don’t like how the Imperial Security Bureau (ISB) is defined and operates, the GM could modify it. If any of the players had read the book, they could learn the hard way that intelligence analyses are not flawless.

The book’s twelve chapters and 144 pages covers how the Empire wields it power; includes detailed breakdowns of COMPNOR, Imperial Intelligence, and the Imperial Navy and Army; describes capital ships, vehicles, and combat troops; and explains Sector Group organization. This book has everything for everyone, really. For me, I was always interested in how the Empire — and the Emperor — ensured compliance with his rule and how he used the state apparatus to do to that. Remember, this was before anyone outside of George Lucas knew what the Clone Wars were other than a brief bit of dialogue between Luke Skywalker and Ben Kenobi:

Luke: “You fought in the Clone Wars?”

Ben: “Yes. I was once a Jedi Knight the same as your father.” 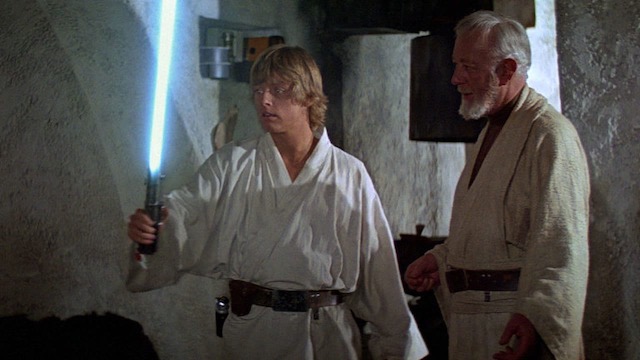 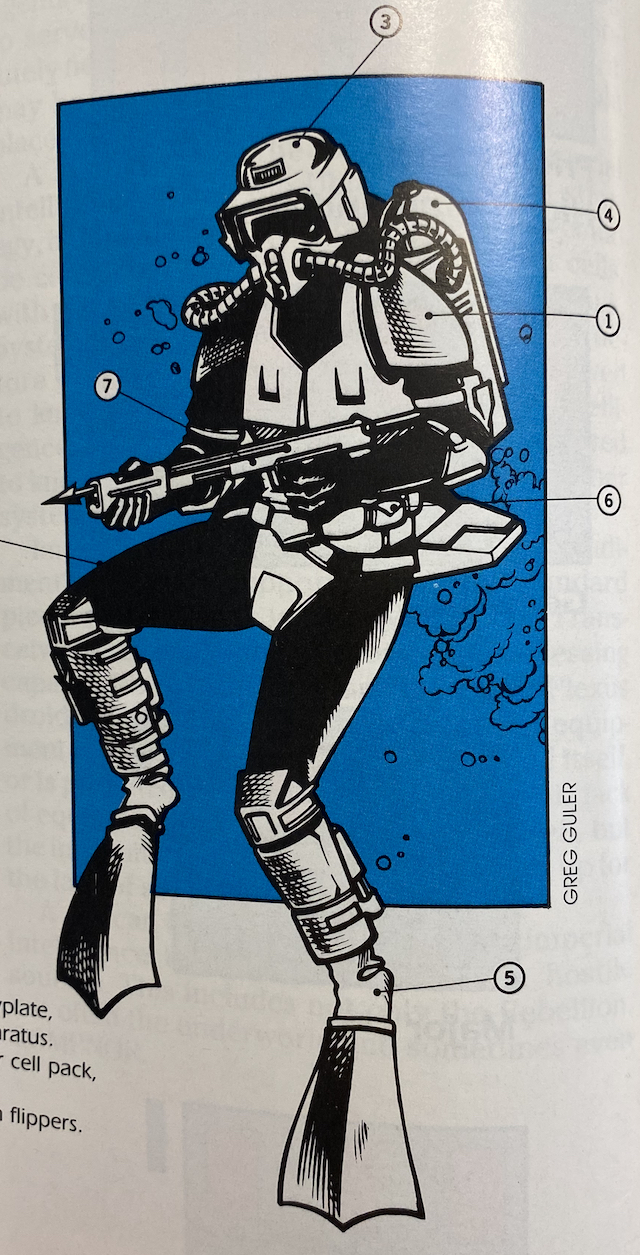 The sourcebook briefly touches on Senator Palpatine and his rise. What is here is not entirely incompatible with the official canon, probably because it is light on specifics in that story. The Old Republic was waning, rotting from within. Unable to deal effectively with crises and beleaguered by its own size and inertia, Palpatine weaseled his way into power. Assuming a docile and easily manipulated persona, he, in truth, pulled in the threads of power and exercised them at the right time.

It was in this climate of trust that Palpatine declared his New Order and named himself Emperor. Skillfully evoking images of the glories of empires past, as well as promising to lead the Republic to a height unparalleled in galactic history, Palpatine gained ultimate power without any real opposition.

The Imperial Sourcebook shows a Palpatine that manipulates everyone to ensure his hold on power. Like all tyrants, he can brook no dissent and seeks to play people off of each other to sow loyalty only to him. Palpatine alone cannot wield the mechanisms of the state; he needs willing participants. The Advisors are a key component to this. Ensuring that they are people who owe their position to the Emperor, they also have more enemies than allies amongst the other Advisors. “Free and greed serve to bind each advisor to the Emperor.” Moffs are in charge of an entire sector (an economic and political division that can vary in the size and number of systems) and Grand Moffs, who are responsible for priority sectors — that is sectors who are not falling into line with the New Order for whatever reason. 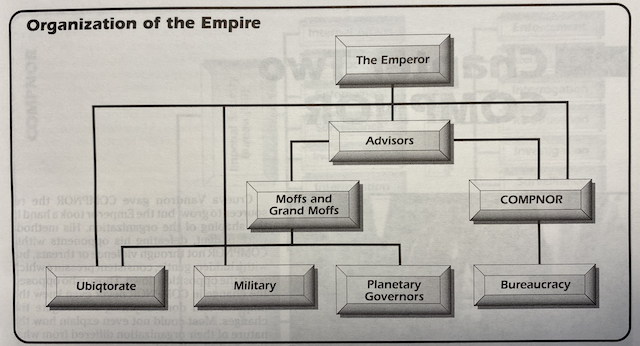 With the suspension of the Senate, planetary governors wield considerable power and answer directly to the Empire.

The Imperial Senate will no longer be of any concern to us. I have just received word that the Emperor has dissolved the council permanently. The last remnants of the Old Republic have been swept away… The regional governors now have direct control over their territories. Fear will keep the local systems in line. Fear of this battle station.

And thus, how the Emperor intends to ensure his power. Besides the Death Star, the Emperor has an array of agencies at his disposal. COMPNOR, which stands for the Commission for the Preservation of the New Order, is a critical piece of this. Originally a social club for those advocating the New Order, COMPNOR has now become a power in the Empire. It moved on to raising your Imperial citizens indoctrinated into the New Order’s principles and from there into the overall bureaucracy that runs the Empire, implementing educational, social, and scientific policies geared to carry the Empire’s message and power. COMPNOR additionally has its own military forces and intelligence and security, the dreaded Imperial Security Bureau or ISB. 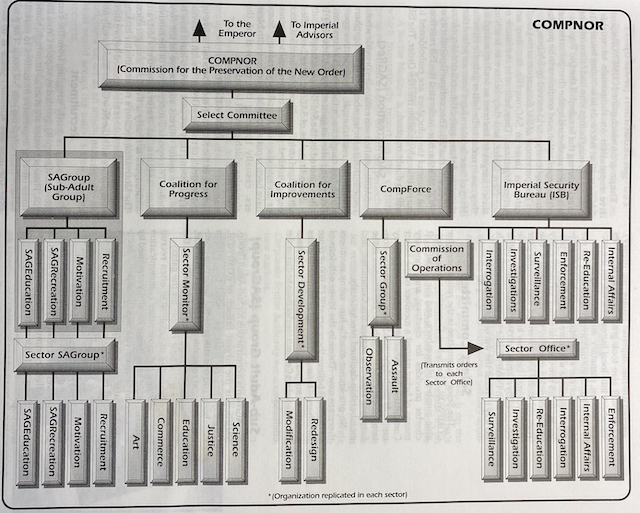 The ISB is the Gestapo or KGB of the Empire — the knock on the door in the middle of the night after the neighbor or co-worker reported you for anti-Imperial activities. For the day-to-day citizen, the ISB is the terrifying force of the Emperor’s will. However, the pervasive presence of COMPNOR everywhere in society is more pernicious, squirming its way even into art:

The Art group is easily the most despised group within Progress by most of the citizens of the Empire. The Art group reports on the suitability of art forms within their sector, trying to apply the same austere tenets of the New Order to every art form within the galaxy.

This chapter provides some great lingo to flavor games as well:

To ‘Jabba’ is to set a suspect up in a no-win situation in which he must, at least technically commit a crime. Internal Affairs then promises to forgive the crime if the suspect does a few favors. Doing these favors inevitably causes the suspect to commit some other crime.

The next chapter covers Imperial Intelligence, which is a continuation of the Old Republic military intelligence. Bothered by the ISB, Imperial Intelligence is in constant conflict and competition with the ISB. This suits the Emperor. The chapter breaks down the various departments in this vast organization. This section includes a choice gaming hook, many of which are scattered throughout the book:

So Tobias, it was a stupid idea to send those eight other 3POs out to find Rebel bases to infiltrate. The Bureau has managed to recover seven of them, but one of them is still out there. If we don’t find that last droid before the Rebels do, you may get a close up opportunity to  see how Rebel equipment works.

The chapter on the military provides specific game statistics for basic military personnel the players are likely to encounter along with descriptions of their basic talents, roles, and training. Here we encounter the Aquatic Assault and Zero-G Assault Troopers alongside the standard Stormtroopers, Snowtroopers, and Scout Troopers. 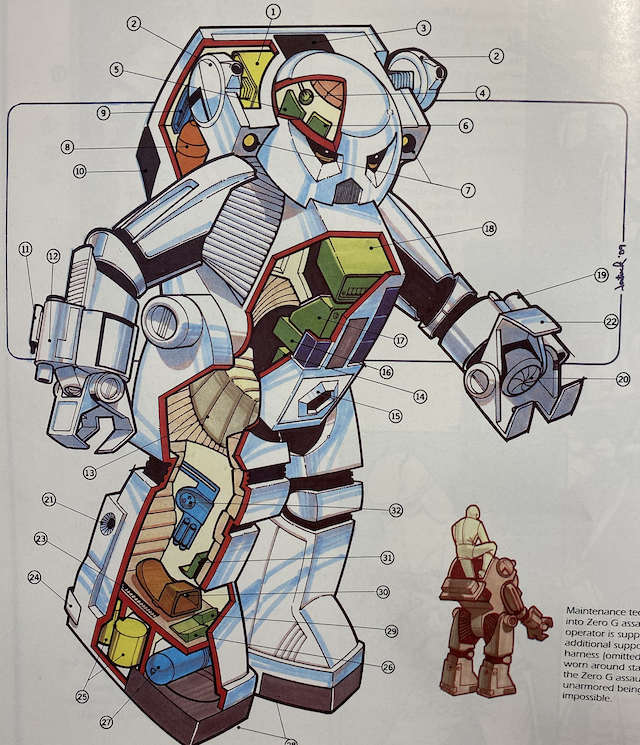 The section on the Stormtroopers does show its pre-canon state — written before Lucas provided the official version:

Where the men who wear the armor of the Stormtroopers are recruited from is unknown, just another part of the mystery that adds to the aura of fear and secrecy that surrounds these soldiers.

The capital ships chapter describes 14 ships, from the assault shuttle to the Super Star Destroyer. Each ship is given a brief description about its military role, history, and special qualities. Here the players can get a forewarning that they do not want to face a Super Star Destroyer’s 250 turbolaser batteries, 250 heavy turbolaser batteries, 250 concussion missile tubes, 250 ion cannons, and 40 tractor beam projectors. Oof. 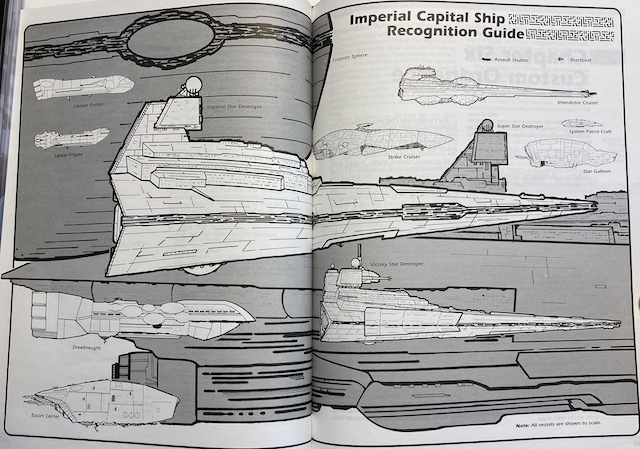 Chapter 6, “Custom Ordnance,” is a short but very useful chapter. It describes cloaking devices, magnetic bombards, orbital nightcloaks, and two-wave gravshock devices. This last one a planet buster that creates concentrations of local gravity that can crush cities, incite earthquakes, and other deadly catastrophes. Each of these can serve as a campaign hook — a group of Rebels attempting to thwart he Empire’s latest weapon to bring terror and extend its power.

The land vehicle chapter covers seven military vehicles, including the Juggernaut, which we see in Rogue One. Jyn Erso was rescued from one transferring her to a labor camp on Wobani. 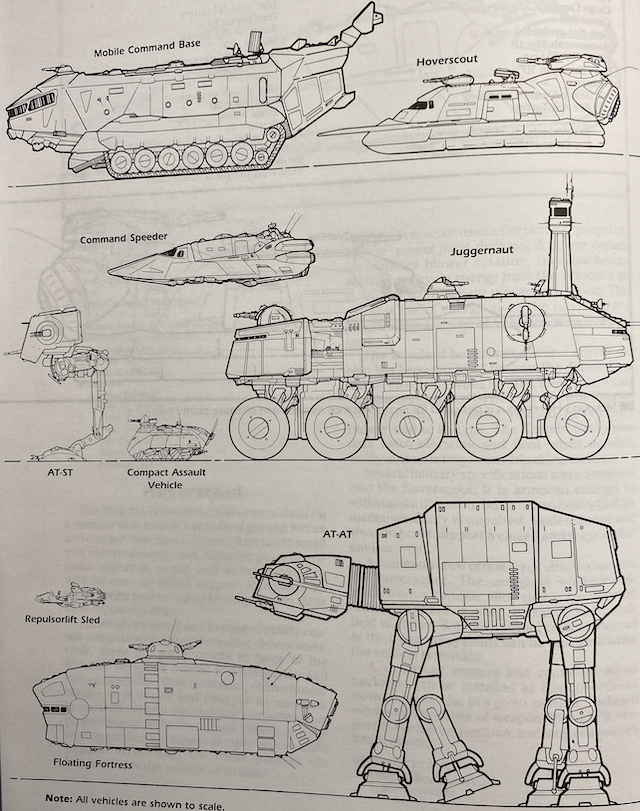 The next chapter covers in detail the organization of the Army and Navy in a sector. Battalions. Corps. Platoons. Squadrons. Fleets. Roles for each grouping, strength, and armament. The chapter includes diagrams utilizing military symbology. With this information at hand, GMs can accurately describe the various sizes of Imperial units. Much of the power of the Empire is embedded in the appearance of massive forces. 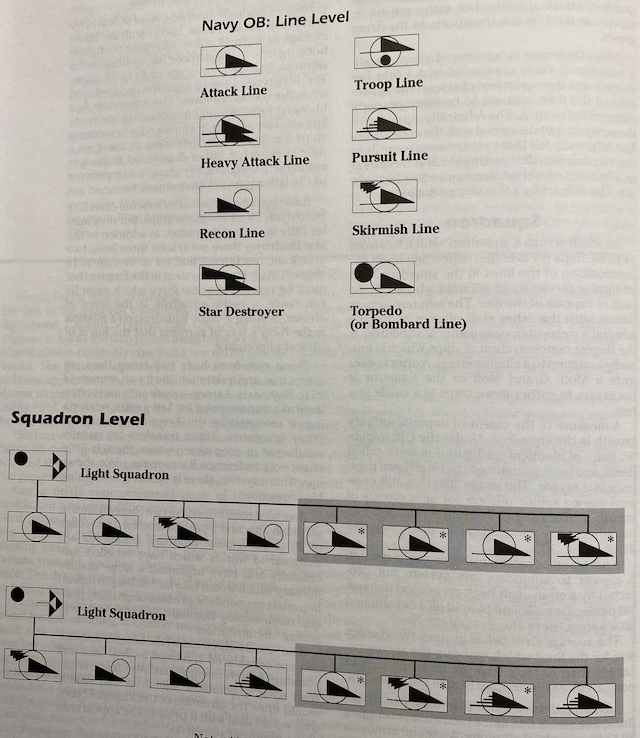 GM: “You learn the planet has a reinforced battle group fighting a large Rebel resistance movement.”

Two more chapters cover Imperial artillery and infantry weapons. The final chapter delves into special forces, including Hell’s Hammers — an armored unit tasked with rooting out Rebel strongholds. These too appear in Rogue One. 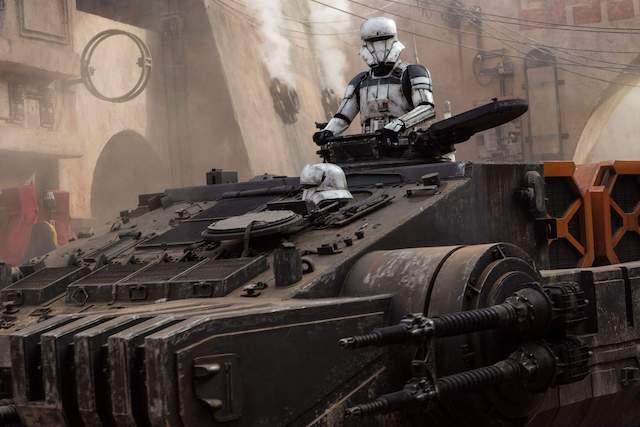 The final chapter describes the standard trading and indoctrination of Imperial military personnel. How they’re recruited, screened, trained, assigned, and ensured of loyalty. As the Guide to the Army Training for New Recruits states:

You’ll be in the forefront of the New Order. You can be proud to serve the Emperor and make the Empire a safe place to live. 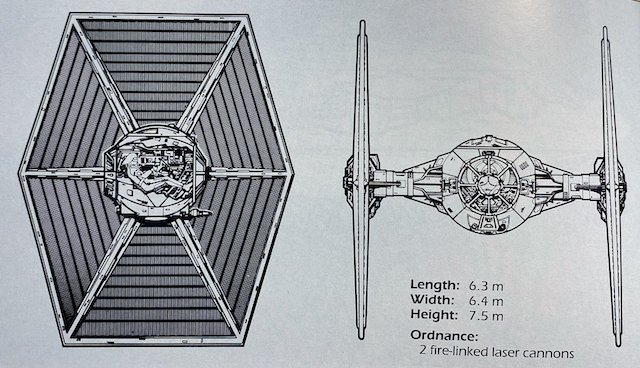 This sourcebook is a classic in worldbuilding onto a pre-existing universe. Conforming to the then known canon, the creators at West End Games added a rich layer — nay, layers — of depth by extrapolating. It feels entirely authentic to Star Wars and clearly had an influence on Lucas and later developments. I mean when the creator tells someone to check out the sourcebooks as a reference, you’re into something.

Patrick Kanouse encountered Traveller and Star Frontiers in the early 1980s, which he then subjected his brother to many games of. Outside of RPGs, he is a fiction writer, avid tabletop roleplaying game master, and new convert to war gaming. His last post for Black Gate was Many Paths of Character Creation. You can follow him and his brother at Two Brothers Gaming as they play any number of RPGs. Twitter: @patrickkanouse. Facebook: Two Brothers Gaming

Classic. One of the best RPG sourcebooks ever.

Thanks for reading and commenting! I completely agree!

However I feel about the Zahn trilogy now – I haven’t tried reading them again, but I suspect I might not love them quite as much as I did when I was a kid when they came out – they were an important part of Star Wars and my youth, and the West End Games Star Wars RPG is legendary. It was not only a great RPG on it’s own, it informed and improved some of the best video games of all time.
Keep up the good work!