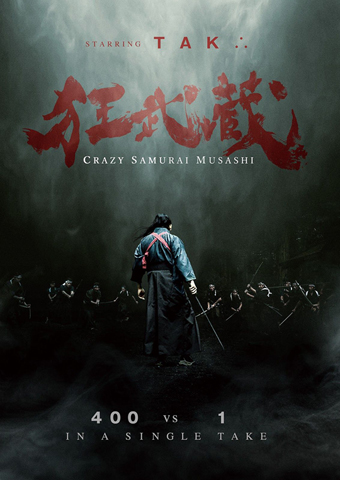 Miyamoto Musashi (1584-1645) was one of the greatest samurai and greatest swordfighters ever to live. By his own account, he fought over sixty duels and won all of them. Stories about Musashi have been told and retold over the centuries, notably including the great novel Musashi (1935-39) by Eiji Yoshikawa. Films about him have proliferated, the most famous likely being Hirohi Inagaki’s Samurai trilogy (1954-55) starring Toshiro Mifune as Musashi.

One of Musashi’s greatest recorded battles was a conflict with the Yoshioka clan. Following two duels with successive heads of the clan in Kyoto in 1604, Musashi fought the remainder of the clan who attacked en masse with various allies. Musashi killed the leader of the clan, among others, and escaped, in the process developing a new style of swordsmanship.

So much for history. Now comes Crazy Samurai Musashi (狂武蔵) a dramatisation of the battle against the Yoshioka. If ‘dramatisation’ is the right word: the 92-minute film consists of a relatively brief prologue and epilogue to either side of an uninterrupted 77-minute shot of Musashi fighting the Yoshioka and their mercenary allies. Directed by Yûji Shimomura, it stars Tak Sakaguchi (Kingdom) as Musashi and was written by Sion Sono (director of Tokyo Vampire Hotel). And it’s not exactly what you might expect from all of the above.

Unlike most movies centred around swordplay, there’s little complicated choreography. Nor are there complex set-pieces of ambushes and attacks from the shadows. And there’s a surprising absence of blood, though CGI splatter is used with thoughtfulness to add impact to a sword-strike; little plumes of blood are used as a storytelling technique, and quite effectively.

This fits with the odd reality the film builds. Musashi begins the fight in a mass battle, one man against 100 of the Yoshioka clan plus 300 mercenaries. When they attack as a group it quickly becomes clear he can kill any given one of his opponents effectively at will — because he is that good — but is at risk from their sheer number. On the other hand, his opponents don’t want to launch a mass charge because no one of them is prepared to give his life. So after a while the mass of opponents divide up into groups of 20 or so, and Musashi moves from area to area, fighting these small bands.

Occasionally, he will find a single tougher opponent. These fights are set up to look like boss fights; meaning that where it takes Musashi 2 or maybe 5 seconds to kill a typical enemy, the bosses take 10 or 20. Because he’s Miyamoto Musashi, and, again, he is that good. The video-game feel’s intensified by the way Musashi finds bottles of water here and there in empty houses or the like: power-ups as his life-energy runs low. 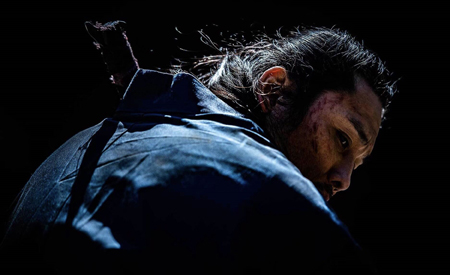 The main danger to Musashi is not so much any individual enemy swordsman or even group of swordsmen so much as it is sheer fatigue. He will kill any given enemy, or dozen enemies. But dozen after dozen after dozen? Will he be ground down?

This isn’t the most dramatic question to ask, but the point is that Musashi finds in himself the will to continue. He comes up with a new kind of swordplay style because he’s been pushed to the wall by exhaustion, and the film builds to that quite nicely: you understand how desperate he had to be to try this new and more efficient way of fighting in the middle of a life-or-death struggle. Musashi emerges as a character here in a way that the rest of the film supports — in brief asides, in his grimaces, in the wordless battle-cries that make up most of the film’s dialogue. That’s anchored in an excellent physical performance by Tak Sakaguchi.

There’s a useful sequence in the middle of the film between two Yoshioka samurai that gives the movie some variety, as well as ultimately further establishing Musashi’s personality. It’s probably also a device to give Sakaguchi some rest. There’s a limit to how much stuntwork and fight choreography you can count on actors to execute past a certain point, even assuming the apparent single take is made up of several minutes-long takes stitched together. The film’s set-pieces have to be developed within the boundaries of what’s possible, and however it was done it must have been not just a technical and logistical challenge to shoot but a physical one both for actors and crew. 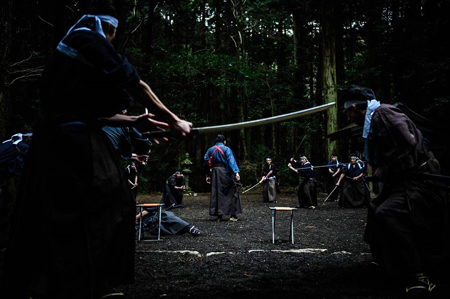 The hand-held camera moves well, covering what needs to be seen, and lending a kind of organic feel to the long take. The setting of Early Modern Japan is often beautiful, and the slow shift in daylight and changes in weather as the fight goes on help reinforce the sense of time in motion. And then there’s the fight itself.

While the combat isn’t elegant or precise, it is visually interesting. The gangs of performers fighting Musashi do what they need to do, filling the frame with motion, waving their swords and falling down on cue. You do notice rough edges. You see them roll out of frame, and some seem to return later. You notice a lot of Musashi’s opponents have bushy hair sticking over a headband, and you realise those are the guys that Musashi whacks in the head because the hair’s hiding protective headgear. For me this emphasised the handmade feel of the film, the attempt to do an unlikely thing with relatively low resources. Others might prefer more polish.

I can certainly see why some viewers would be bored with it. And why others might be disappointed with the lack of showy violence, the absence of decapitations or blood spray (CGI aside, this is an oddly bloodless battle). But personally I found the film as a whole deeply satisfying. There’s a specific pleasure that comes from watching a man work when he’s supremely good at his job. Crazy Samurai Musashi captures that. You have the power-fantasy thrill of a main character who’s an unstoppable killing machine, and real tension that derives not from any single opponent but from a man forced to push his own physical limits. It’s not a flawless film, and not for every viewer. But a little like Musashi himself, it does what it does very well.

I own the trilogy with the great Toshiro Mifune, but this sounds intriguing.

Thanks for the review!

I have GOT to see this movie–but it’s not out yet! Patience, Grasshopper….patience….