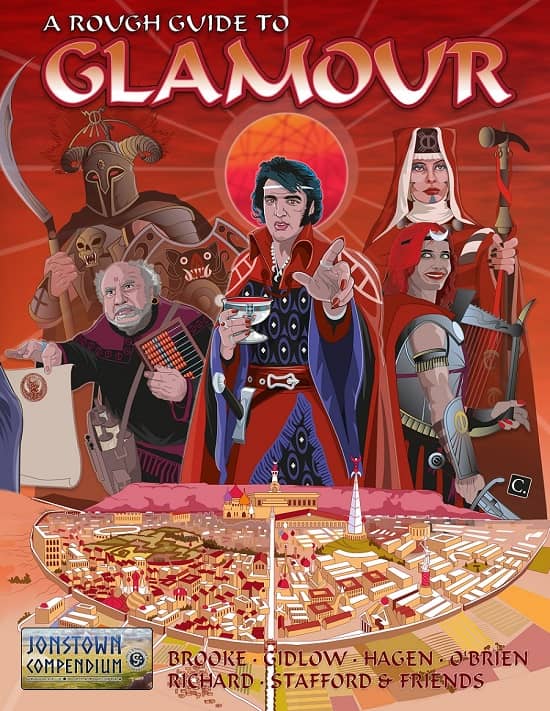 I always enjoy catching up with my Australian friend Michael O’Brien (“MOB” to his friends). We met back in the nineties when we were part of the so-called Reaching Moon Megacorp, a group of ardent Glorantha fans working on the pioneering RuneQuest/ Glorantha magazine Tales of the Reaching Moon – he was an editor, I was the dogsbody. (I should mention that MOB is a director of the Chaosium now, alongside our American Reaching Moon Megacorp colleague Rick Meints – it’s a small world, sometimes).

As MOB and I live on opposite sides of the world, we usually only bump into each around conventions. And so, the last time we met was at Dragonmeet in London last November. MOB was about to launch the Jonstown Compendium, Chaosium’s community content site for RuneQuest and Glorantha on DriveThruRPG. And he talked to me about things that might now be possible…

As I said, we’re both veterans of the Gloranthan fan-publishing scene. We both love Greg Stafford’s fantasy world of Glorantha, which mixes a heady brew of Bronze Age mythology, shamanism, Californian wackiness and sword-and-sandal adventure. We can remember having to navigate a twisty world of restrictive licenses to get anything done: back in the day, unless you found a friendly fanzine editor, you needed to work out printing and distribution deals for yourself. Even then, everyone involved was taking a risk trying to get such speculative stuff out into the world.

Nowadays, the Jonstown Compendium does all that work for you. It gives you shelf-space on the largest RPG download store on the internet. Digital distribution, coupled with print-on-demand technology, means you don’t need up-front funding. Since launch, a supportive community of Glorantha authors and artists has come together on Facebook via the Jonstown Compendium Creators’ Group. And Chaosium generously advertises new community content through its social media and email marketing channels. But I’m getting ahead of the story…

Back in the nineties, the Reaching Moon Megacorp ran live-action freeform role-playing games for Gloranthan conventions. David Hall and Kevin Jacklin put on Home of the Bold (80 players, 1992: I played a puppet prince). I joined them to write How the West was One (70 players, 1994: MOB played a very naughty Pope). Still more friends came on board for Life of Moonson (50 players, 1997: MOB played the Red Emperor himself).

Back then it was hard to get permission to print and share the core setting information a newcomer needed to get up and running. Glorantha is a rich, deep and strange setting. Each of our games brought some unique facet of the world to light. Home of the Bold: a conquered city teetering on the brink of rebellion, like Casablanca crossed with Braveheart and Life of Brian. How the West was One: an ecclesiastical council of popes, bishops and heretics held in a Gormenghastian megacity on the eve of Armageddon. Life of Moonson: a gloriously decadent imperial capital, staving off its imminent decline and fall with propaganda, official statistics and purest moonshine.

Our great friend and mentor Greg Stafford, original creator of Glorantha and owner of the IP, was understandably, justifiably wary. These games were loud, brash, fun, memorable… and not too concerned with source fidelity or archaeological detail, if those got in the way of making something people could play and enjoy. It’s no surprise we produced whole issues of Tales of the Reaching Moon that were thematically linked to our freeforms. Go West! (Tales #13, 1995) and Lunar Special (Tales #16, 1997) were by-products of the work we’d put in fleshing out new corners of Glorantha for gaming. 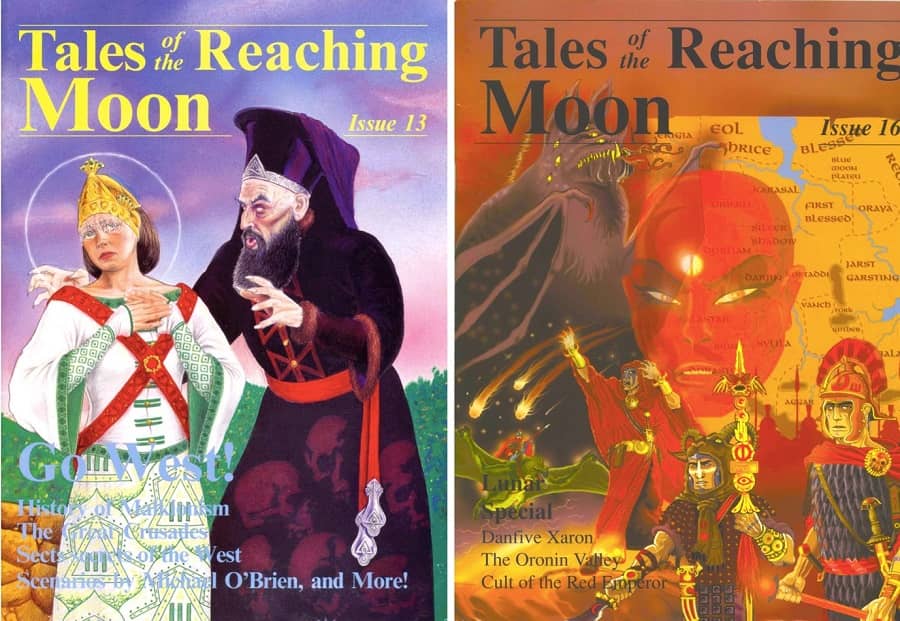 For Life of Moonson, Greg also allowed us to hand out copies of our players’ guide to people who had signed up to play the game. Fifty players, three runs (Canada, UK, Australia): you do the math. 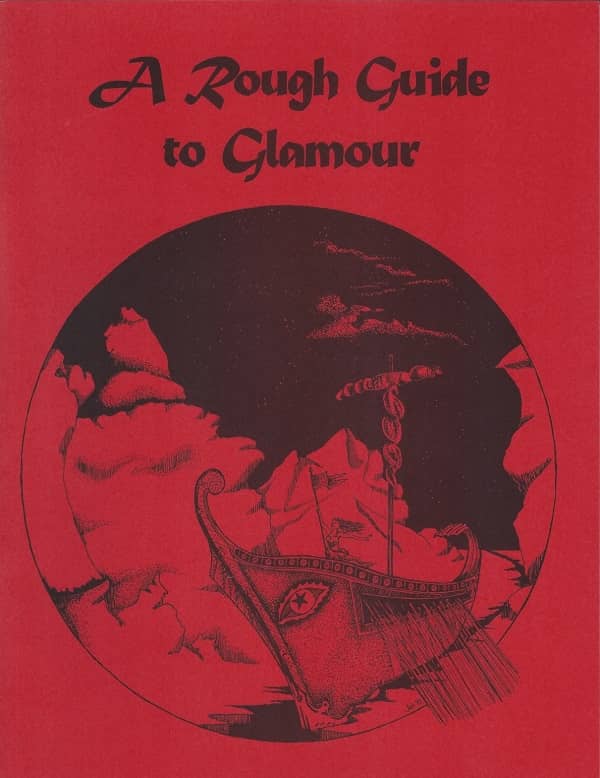 With only a couple of hundred copies ever produced, the first version of A Rough Guide to Glamour, by my friends Chris Gidlow and Mike Hagen, was never on general sale. Nevertheless it contained some of our best work on the Lunars: the fascinatingly attractive, deceptively rational-seeming antagonists for most Gloranthan role-playing games. So I asked MOB, could we sell a new edition of that book on the Jonstown Compendium? And he told me: “Go for it!”

Our friends at Chaosium couldn’t have been more supportive! The original Rough Guide was forty pages long. The new edition cut a third of that content: a few of the freeform play-aids, plus articles so critical to Glorantha that they’re now part of the official canon in Chaosium’s Glorantha Sourcebook. We then revised and expanded the book to over 110 pages. 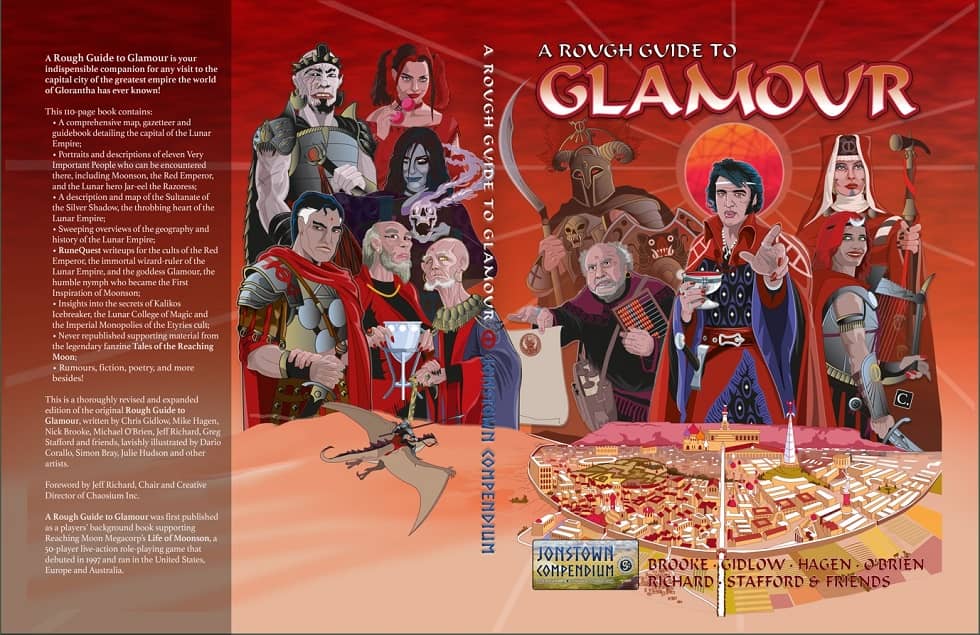 We added fiction (a cycle of short stories MOB and I developed through the nineties), poetry (Pelorian Rhapsody, the passion-play of the Red Moon Goddess), and RuneQuest rules (the Red Emperor’s Cult from Tales #16, and a new writeup for the Cult of Glamour, by Chaosium’s Jeff Richard). 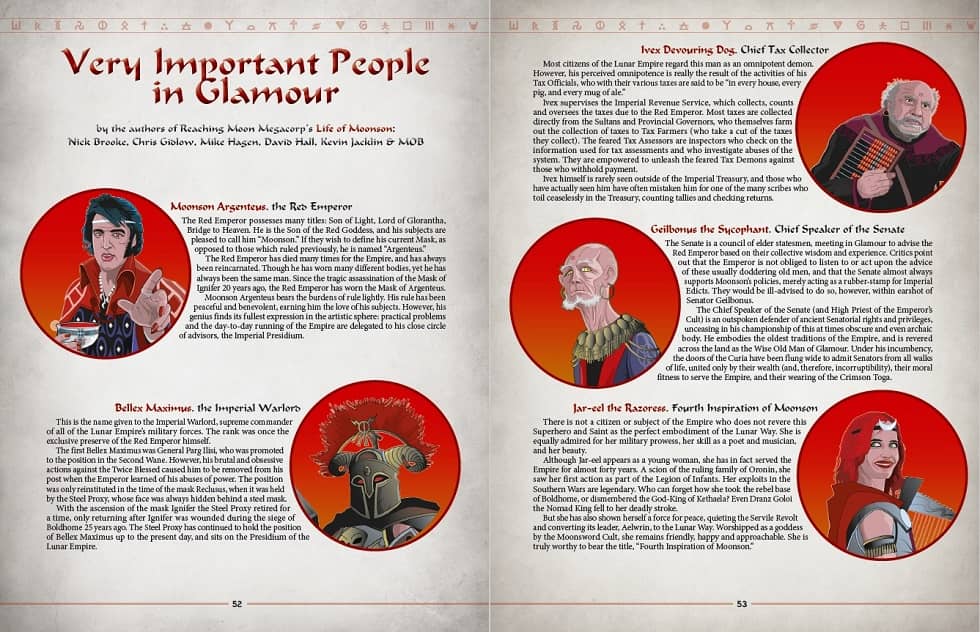 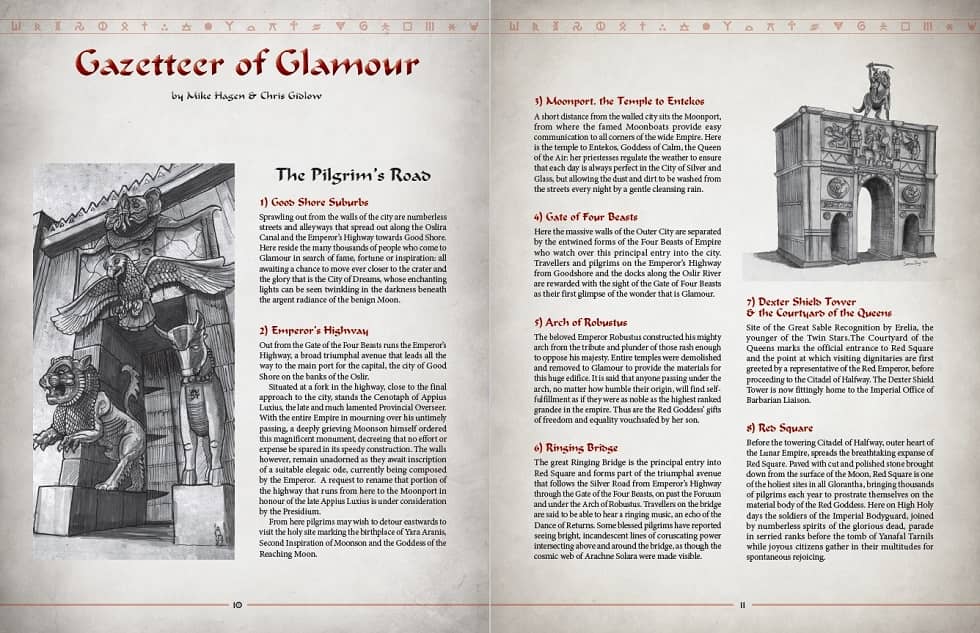 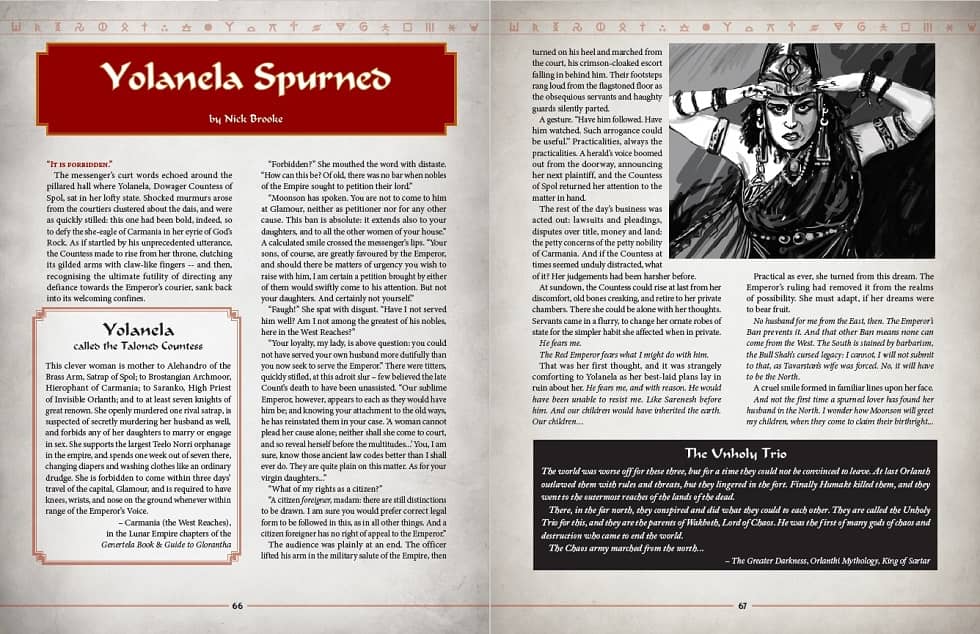 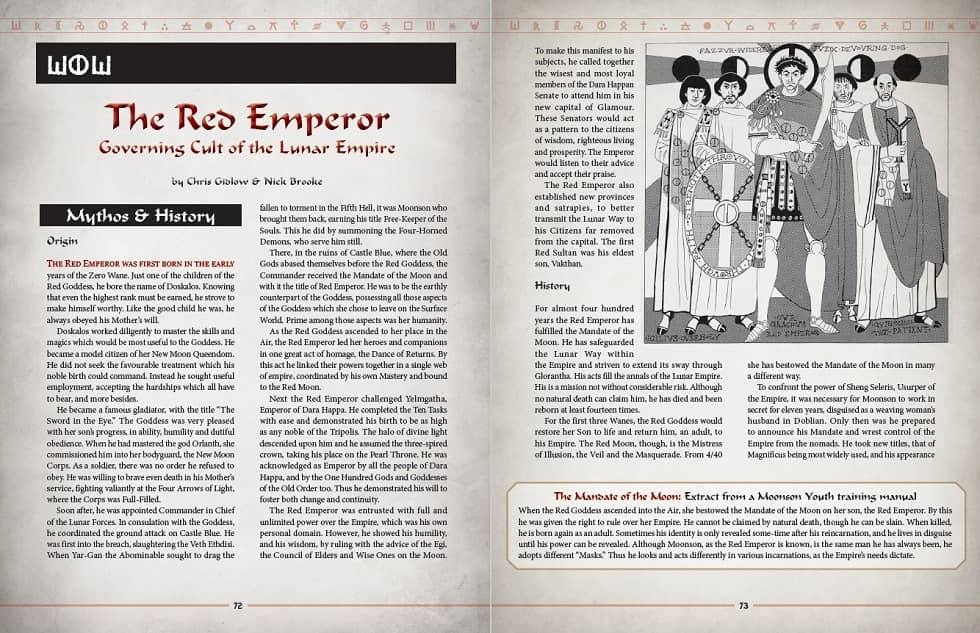 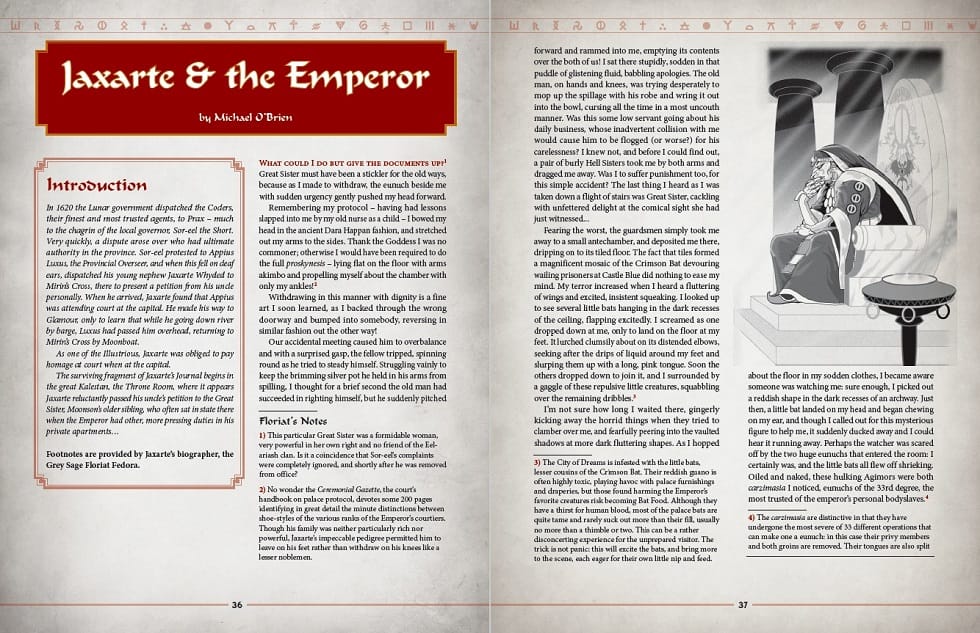 Our favorite artists let us reuse their pieces from the original work – Simon Bray even refreshed his portfolio for us! The Italian maestro Dario Corallo produced a new gorgeous cover showing the Red Emperor, looking suspiciously like Elvis and surrounded by a court of celebrity VIPs, all looming over Julie Hudson’s aerial view of the capital.

The real prize, though, is Antonia Doncheva’s image of the Goddess Glamour incarnate: Blondie as drawn by Mucha. 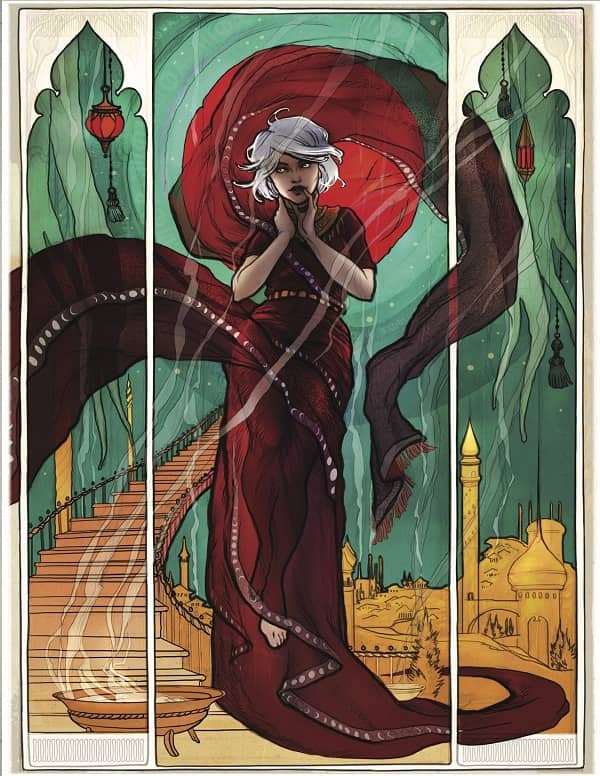 Chaosium also allowed us to quote from the Guide to Glorantha and Greg Stafford’s Zero Wane History. Those key passages let us link the book to its roots. Colin Driver, cartographer of the Guide to Glorantha, mapped the Silver Shadow Sultanate for us in glorious shades of red. Rick shared the scanned artwork he’d used to lay out the first edition.

The resulting book is everything we dreamed of! It’s a beautiful hardback that throbs with Lunar magic and the propaganda drumbeat of imperial decadence. Jeff’s foreword puts our game and its book into their historical context as rediscovered artifacts of a lost age. 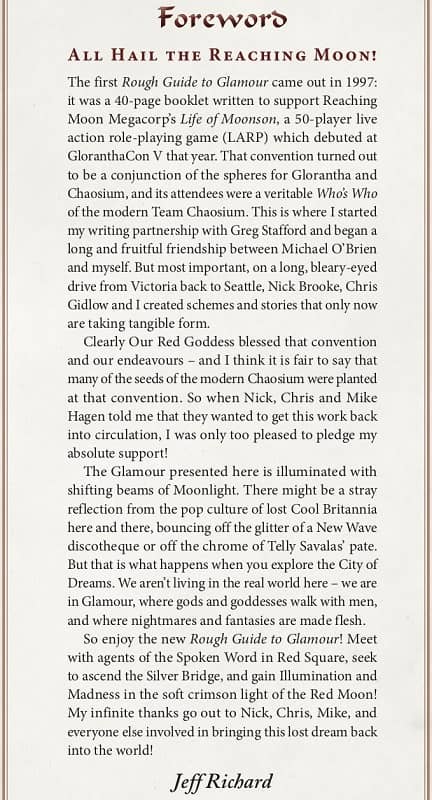 We are delighted with its reception! A Rough Guide to Glamour is the Jonstown Compendium’s best-rated product, and has just been awarded the store’s first Gold best-seller medal. As we Lunars like to say, “Time is on our side, and the tide is high.” So you won’t be surprised to learn that we’re all hard at work on a sequel… 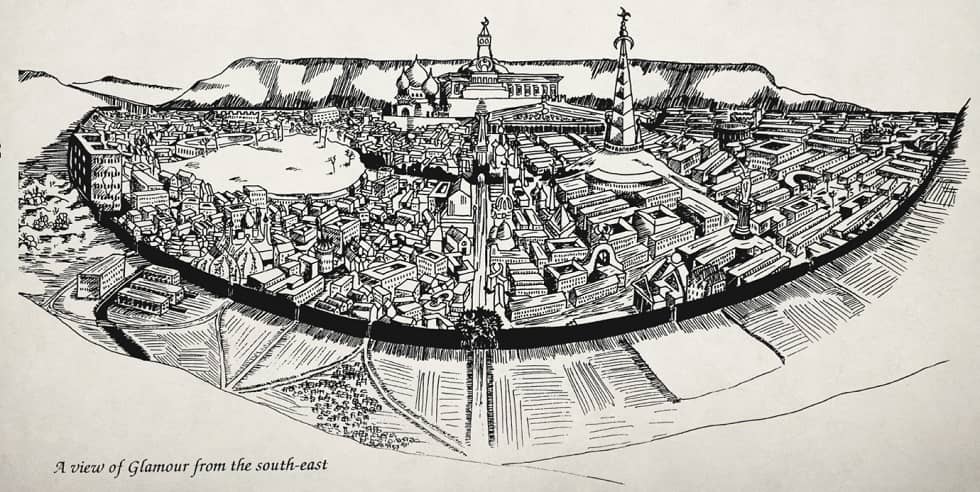 MOB: Hey Nick, some RuneQuest fans might be concerned that, awesome as it is, the city of Glamour is a l-o-n-g way from RuneQuest’s traditional stamping-grounds of Dragon Pass and Prax. What do you say to someone who says “My RuneQuest campaign is set in Sartar! Why do I need to know about a city that’s hundreds of miles away?”

NICK: Because people shaped by that city are in Dragon Pass right now – dreaming their dreams of Empire, leading armies, temples and magical rituals which will have a profound impact on your well-being – and reporting to bosses and institutions based in Glamour. Would you run a game set in Roman Britain and never try to understand Rome? “It’s a long away, their culture is completely unlike ours, how much can it matter?”

Asterix the Gaul made several visits to Rome, and the Asterix books were one of our models for the pioneering Greydog Campaign: a mix of clan-based political scheming and Lunar plots at home, with travels to exotic foreign locations to meet interesting people and kill them, all over Glorantha.

If your players manage to lose my Jonstown Compendium scenario The Duel at Dangerford, it seems utterly reasonable to me for them to end up dragged in chains in an Imperial general’s triumphal procession through the streets of Glamour (our city guide even sets out the route), only to be rescued at the last minute by Great Sister’s intercession – her new “Just Say No to these specific human sacrifices” campaign – which allows her to recruit off-the-books, deniable, expendable assets (PCs) for secret missions into her brother’s City of Dreams…

… well, that’s what comes to mind when people say they can’t see how to use our Glamour book in their RuneQuest: Roleplaying in Glorantha campaign. 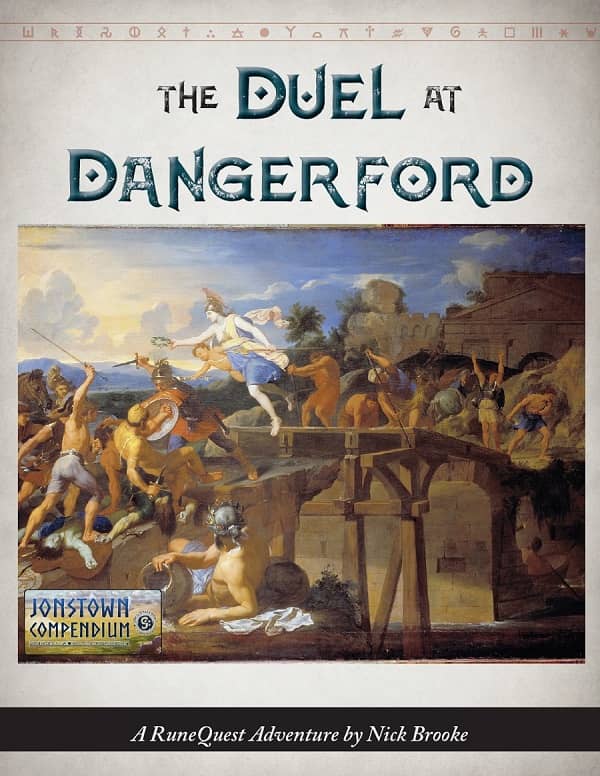 Nick Brooke was introduced to Tales of the Reaching Moon editor-in-chief David Hall by Chaosium’s founder Greg Stafford in 1991. He worked for Hall’s Reaching Moon Megacorp producing magazines, conventions and books throughout the nineties, and co-authored two Gloranthan freeforms: “How the West was One” (seventy players, 1994) and “Life of Moonson” (fifty players, 1997). Since Chaosium’s Jonstown Compendium program launched in December 1999, he has published two of its best-rated titles — “A Rough Guide to Glamour” and the epic RuneQuest scenario “The Duel at Dangerford” — and regularly helps his fellow creators with layout and print-on-demand chores. He also maintains a regularly-updated index to all of the Jonstown Compendium Scenarios and Sourcebooks.

I find this article frustrating, in a good way! Amazing revisions and support for the game and Glorantha. My frustration comes from wanting to consume all of this but there is an ever increasing pile of excellent material. Thanks Nick I must swing by Jonstown and take a look!

This book is superb!

Whether you are a fan of Glorantha or just a GM who is looking for an Imperial City to enrich your campaign, you can’t go wrong with this masterpiece that pulses with myth, magic and mystery all delicately shrouded in a twisted wisp of British whimsy.

The content is rich and varied.
The interior artwork is magnificent.
The cover art is such a gorgeous pulsing crimson that I can find the book at a glance no matter which bookcase it tries to hide in. (Hah! SEE YOU!)

*Nick – Thanks for your work on keeping the JCSS index up-to-date. It is invaluable. Now to take a look at Duel@Dangerford.

I had the chance to play in ‘How the West was One’ at RuneQuestCon 2 in San Francisco. My free-lovin’ Lothario of a heretic had a crisis of faith when he discovered just how heretical his sect was. But that worked out fine, as the High Priestess who helped cure his fears turned out to be his True Love. Even if her character was 70 years old …

I guess I should wander over to DriveThruRPG and see what I have been missing beyond the Glow Line.

[…] previously mentioned Black Gate online magazine recently featured an article by Nick Brooke. As you might expect, Nick writes about A Rough Guide to Glamour, the Jonstown Compendium, Tales of […]