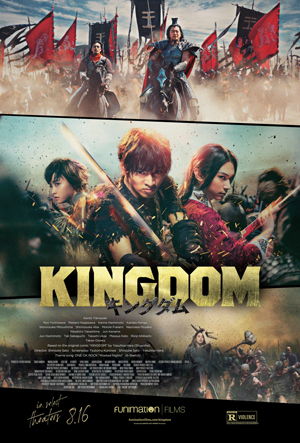 My third movie of July 27 was a live-action manga adaptation by the dauntless and prolific Shinsuke Sato. Having been thrilled by his previous work in past years (I Am A Hero, Bleach, Inuyashiki, Death Note: Light Up the New World, and Library Wars), I was eager to see something new from him. This year’s offering was Kingdom (Kingudamu, キングダム), which Sato scripted along with Tsutomu Kuroiwa, adapting the manga of the same name by Yasuhisa Hara. As of August, there were 55 volumes of the manga, which had already been adapted into a 77-episode anime. I am not familiar with the source material beyond those statistics, but they suggest that Kuroiwa and Sato had their work cut out for them fitting the story into a two-and-a-quarter-hour movie.

The setting is ancient China, where war swirls among feuding kingdoms. Two orphans are taken as slaves by a wealthy merchant. They grow up dreaming of a better life, and practicing swordplay on their own in the forest near their master’s home. One, Piao (Ryo Yoshizawa, Gintama), is bought by a government minister. Piao’s blood-brother, hothead Xin (Kento Yamazaki, Jojo’s Bizarre Adventure), is therefore surprised some time later when a dying Piao returns with a mission for him — and the soldiers who gave Piao his mortal wound hard on his heels. Xin’s launched on a quest that leads him to the young king Ying Zheng, now deposed by a palace coup. The minister who bought Piao had used him as the king’s double, which saved Ying’s life. Now the ambitious Xin wants to keep him alive, and make his own way to a great destiny.

This is a well-told story. It builds nicely, through varied set-pieces that come at key structural points, are executed with flair, and move the story forward. It’s always colourful and fun to look at, though unsurprisingly the costumes show the manga roots of the film: major characters stand out through their eye-catching gear, to the point that we know a general we see at only a couple of points is obviously going to play a major role in the climax. But this fits into the overall tone of the movie, both narratively and visually. The choreography is strikingly effective, which is important, and the humour works, mostly coming in the form of Xin’s aggressive attitude toward just about everything.

If you look carefully, you might notice the film’s not actually as lavish as it seems. There aren’t any major urban scenes, for example. But there’s enough variety generally that you don’t notice any lack. Xin and company explore a lot of different places, and the story feels full to bursting. The sense of a vast kingdom containing a range of people and cultures and landscapes comes across, and that means more is not needed. 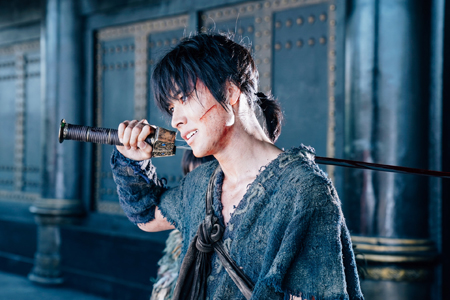 Tonally, this is an adventure story that doesn’t ‘push the bounds of history’ so much as ‘push the bounds of what potentially was physically possible to have existed in history.’ Accuracy is not the point. This is a film about adventure and swordfights and the fate of kingdoms. It’s about as close to reality as Robin of Sherwood or last year’s excellent action movie The Scythian — which is to say it’s inspired by history, it uses recognisable characters and situations and settings, but mostly it tells a bigger story with costumes and concepts that push at the boundary of fantasy.

In that context I note that this is a Japanese take on Chinese history, and I frankly don’t have any sense of how or whether concerns about cultural appropriation apply here (as far as I can tell, all the actors and filmmakers are Japanese). What I can say is that it feels very different from a Chinese wuxia film set in this era. The stunts and choreography are different. Xin is a lead who has a personality familiar from manga, cocky and brash in a way completely unlike the typical kung-fu hero.

Thematically, I would say the film’s about dreaming big and finding strength in dreams. That sounds simple, even trite. But the sword-and-sorcery imagery makes it come alive. The world Xin and Ying wander through is itself a kind of world of dreams, a place where anything can happen and especially any kind of adventure; where a slave-boy can rise to great power in the richest kingdom in the world. The theme’s old, the historical basis of the story is old, but the way the story’s told makes it feel new. 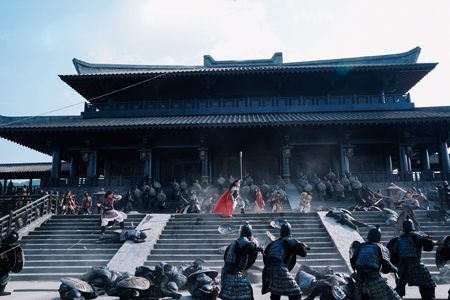 I don’t say it’s a perfect movie. Xin doesn’t grow much as a character over the course of the film. And I felt he tended to fade from prominence in the second half or so, perhaps as a result. The climax is good, but one of the set-pieces (involving archers) feels a bit unlikely as staged. And while the climax does go through a number of different phases more or less effectively, cumulatively it’s a bit overlong. It is true a 135-minute film is going to take a while to resolve coherently, but then it’s also true that by the end the audience’s patience may be tried. There is a real risk for the film in providing too much of a good thing.

Still, I have to say I can’t think of anything I’d cut or any sequence that feels slow. Kingdom establishes what it is and moves ahead vigorously, with touches of a genuine epic sense provided by cutaways to the political scheming of usurper Chang Wen (Masahiro Takashima). It tells an action story that’s sword-but-not-quite-sorcery, and importantly knows how to depict character through its action sequences: different fights have different meanings and tones. I will note that traditional romance is virtually nonexistent, focussing instead on brotherhood and martial virtues; and this is good, as it’s hard to see how a romance subplot would have added to the film. Xin is a man with a dream, and this is a story about him getting out of the situation he’s in as the story starts, and ultimately fulfilling his ambition. BY matching his focus, Kingdom ends up a tremendously entertaining and tremendously successful movie.

“And I felt he tended to fade from prominence in the second half or so, perhaps as a result.”

I personally found this to be quite a relief, as either the actor or the character as written was typically a grating boy-snark. While there was either an elegance, subversiveness, or quirkiness to every other character, Xin was never a pleasure to watch — and I just about lost it when his character passionately emoted a “twist” he was observing that the audience saw several miles away (or, for Canadians, several 1.6KM units away).

My memory of it is a bit rusty, but I clearly recall this being my only criticism of an otherwise super fun, super charged “swords-man” adventure movie.

Let me know if you want to dive into a long conversation about “cultural appropriation”. (I’m not trying to pick a fight–I swear.)

I believe you! But a long conversation might be better had in person at Fantasia next year.