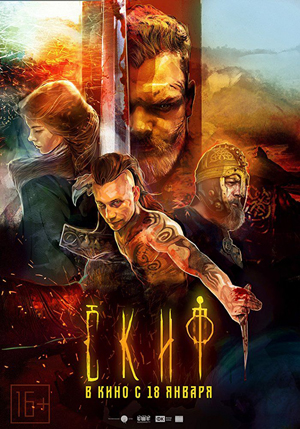 My last movie of Sunday, July 15, was a film I knew little about going in. It was The Scythian (Skif, Скиф), a Russian film directed by Rustam Mosafir from a script he wrote with Vadim Golovanov. It started late, and for most of the day I’d been unsure whether I’d stick around to watch it; in the 11 hours between leaving my house and the time it started, I’d ingested a few handfuls of peanuts, one (1) tin of off-brand cola, and a few mouthfuls of water. Still, I took my seat, the movie started, and then I quit paying attention to my physical body for one hour and forty-seven minutes. The Scythian is one of the best action films I’ve seen in years. It’s engagingly violent, and the violence is done well — but more than that, it’s filled with cleverness and unexpected twists. If you’re a fan of sword-and-sorcery or sword-and-sandal movies, you owe it to yourself to see this movie, and as soon as possible. (And I note it’s being released August 14 under the title The Last Warrior on VOD, Blu-Ray, and DVD.)

The story’s set in Russia in the Middle Ages, as the Russian Lord Oleg (Yuriy Tsurilo) is conniving to gain control of Kiev. Among his most trusted warriors is a man named Lutobor (Aleksey Faddeev), whose wife Tatyana (Izmaylova Vasilisa) has just given birth to a son. But then Tatyana and the baby are kidnapped by Scythians, specifically by a clan of elite assassins who’re the last remnants of their people. But one of the Scythians, a man named Marten (Alexander Kuznetsov), is betrayed by his own people and captured by Lutobor. Lutobor now intends to take Marten as his guide, trek into Scythian lands, face down the clan of trained killers, and recover his wife and son — not to mention find out who hired the Scythians in the first place.

It’s hard to know where to begin in talking about this movie. It’s not especially deep, though it is conscious of itself as a piece of heroic fiction — it begins by talking about its era as “a time for new heroes brave at heart and strong in spirit.” The key is that everything it does, it does very well. Most crucial, I suppose, is that it tells a ferocious story with some surprising character choices, presents a strong relationship between the two male leads that deepens over the course of the film, and evokes a sense of a whole world beyond the specific plot to hand. This is nominally historical adventure, but in fact it pushes “historicity” to the edge and beyond, incorporating magic potions, omens from the gods, and surreal costumes and props. To me, this is absolutely sword-and-sorcery, a classic pulplike fantasy set in (or in this case near) Central Asia, something out of Robert E. Howard or Harold Lamb or Arthur Howden Smith’s Grey Maiden tales. 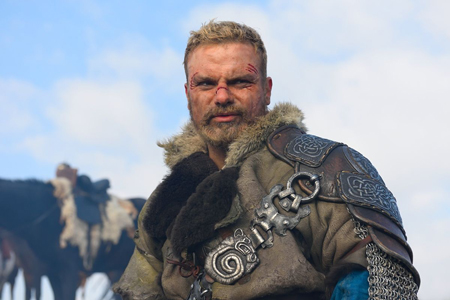 The plot outline reminded me slightly of The Eagle of the Ninth: a warrior from a powerful empire goes into pagan lands to find something precious but lost, with a pagan captive as guide. Now, when I wrote about Eagle of the Ninth here a while ago, I said it reminded me of a mix of Tolkien and Howard; The Scythian swaps out Tolkien for George R.R. Martin. There isn’t the sense of the loss of times past, or the elegaic tone. But there is a lot of brutal violence, unexpected betrayal, and larger-than-life images and ideas. There are a lot of grime and scars in this movie, a lot of grit and a lot of grim. But a lot beyond that, too. Lutobor’s engaging in part because he has some ideas of honour that he sticks to, as well as a love for his wife that drives him frantic when she’s lost. There are real stakes, brought out by Faddeev’s performance as much as anything else.

This isn’t a character-centred film, but Faddeev grounds the film in an engaging hero. Lutobor starts out almost second fiddle to Marten, the cooler of the two leads, but he has the stronger character arc. We see him cross various boundaries in pursuit of his wife, and see his shock and repentance at the things we must do. We see his identity change, and it always feels natural, a logical outgrowth of what he’s been through. His performance tells a story, and drives the story of the film.

I mentioned that Marten the Scythian is the cooler of the two characters; he’s the trained assassin, guiding Lutobor with a possible ulterior motive (I don’t want to give too much away, but there’s a scene in an old temple that ends with him agreeing to uphold an oath Lutobor forces out of him, and the reason he gives for that agreement is brilliant). He’s more impassive, detached, and more skillful and showy with his weapons — knives, to be precise, and we soon come to recognise the sound of his blades alone, so we don’t need to see him to hear when he’s taken out another mook. He’s a man who keeps secrets, a clever man though a violent one, and we’re interested because we want to know what he’s hiding. 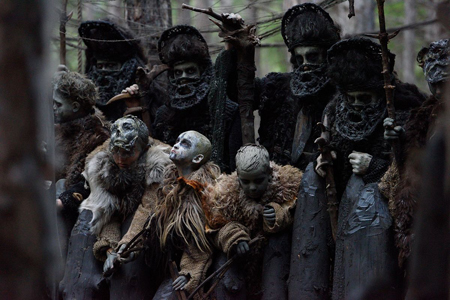 What really works, and makes the film work, is the relationship that grows between the two of them. There’s a feel not unlike Fafhrd (the brawling, passionate Lutobor) and the Gray Mouser (the cunning, cold Marten). Surprisingly, I also found myself thinking of the Marvel Cinematic Universe’s Thor and Loki — a blonde brawler, a tricky saturnine knife-wielder. Either way, the two men develop a bond as they adventure deep into the Scythian lands, and that interplay as it grows and twists gives the film enough of a heart to anchor the violence and the (considerable) blood.

(Worth noting at this point that the movie about two men has no woman character that could not be more or less adequately replaced by a decorative wall hanging. I would argue that this isn’t so much a sign that The Scythian should be altered as that we as an audience are collectively being shortchanged by lacking films in which women do great and ferocious deeds and in which men are comparable to wall hangings. Lacking those films, this one may well not to be to every taste. I will also note, while I have this parenthesis open, that this is a movie about Russians fighting over land that is now Ukraine, filmed in Crimea. Personally, with my limited knowledge about recent events in that part of the world, I couldn’t find an easy equivalence between the story of the movie and the present day; certainly Russian territorial aspirations in the film didn’t strike me as particularly endorsed. But I make no claims to particular awareness, and others might find different readings.) 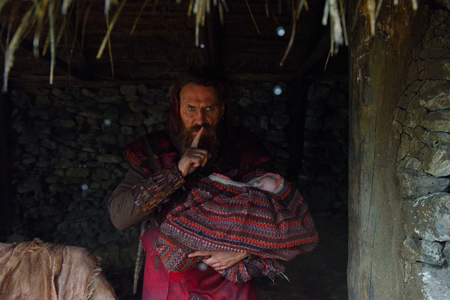 The opening scene demonstrates a lot of the virtues of the movie. It’s a fight scene. But it’s a scene that doesn’t go as you expect, that reveals character, and that demonstrates a certain amount of wit. Like the rest of the film, it’s clever without being quippy. It’s clever in entirely the opposite direction, clever in its use of laconic dialogue and unexpected twists. And, unobtrusively, it starts the process of building a world. We get a lot more of that in the next scene, a diplomatic encounter that goes wrong; before it goes wrong, we get elaborate-yet-well-worn costumes, character interactions, a sense of state. We see how the characters think about the world: we see the rituals they go through. A speaker walks through a labyrinth incised on the ground before delivering a message — it’s a small detail, unfamiliar yet instantly understandable, and it says a lot about the characters and how they structure social interaction.

That sense of a world is maybe most powerful in the way the film handles the supernatural and the gods. There are gods of multiple pantheons here, Christ, Perun, and the Scythian Ares, and the back-and-forth of their worshippers is fascinating. The supernatural’s constantly impinging on the physical world, and sometimes manifests explicitly. The movie’s just heightened enough to make this credible without being, for the most part, so heightened that violence becomes unreal or lacking in danger — and if it starts leaning in that direction by the end, the conclusion goes in a different direction, not relying on immediate violence to wrap things up. In this again it feels like a pulp story, where the action’s important, but the story’s what matters. And it has the strong sense of form you find in the best of the pulps: this movie doesn’t just end in the right place, or with the right scene, but on the exactly correct frame of film. 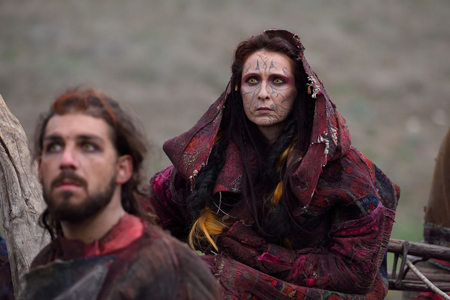 All this, and I haven’t mentioned how spectacular the movie looks and sounds. Wide-screen vistas of mountainsides and coastlines give a mythic scale. Handheld cameras catch the scrambled feel of a fight without being unclear. Candlelight feels like candlelight, shadowed and mysterious; the colour work in the film’s lovely. Meanwhile, the soundscapes help build the world, particularly in the scenes of the wilderness. And the soundtrack (by a band called POTIR) is excellent, folk with a medieval feel that adds some metal chords near the end.

This is a movie that absolutely succeeds at what it wants to do. It’s a historical action film that does everything right, from camerawork to soundtrack to fight choreography to costumes to acting to editing. What stands out the most, though, as it must, is the script. This is a strong story that keeps doing things you don’t expect, and builds character naturally, almost without the audience noticing. It all adds up to one of the most supremely fun experiences I had at Fantasia this year. It’s not that it’s the apotheosis of cinema. But it’s the best possible version of itself that it can be.

I have a Russian movie called Furious, sitting on my counter that I’ve been meaning to watch. This looks like another one that I would like to see. It makes me curious about other Russian films, and what we’re missing out on. I hope they don’t go full CG crazy like the Chinese films did.

Have you seen the Russian movie Viking from a couple years ago?

CMR: There’s so much stuff out there it’s stunning. That’s one reason I love doing these Fantasia posts — just to be able to see some of the movies being made around the world. And then to tell people about them! (I’ve got another review of a Russian movie coming up in a bit. I’ll say now that it’s not as good as this one, but it’s … well, it’s interesting!)

Joe: This is what I mean — I didn’t catch that one! It looks Fascinating, though, if only because it seems very polarising!

I haven’t heard of Viking, but it looks interesting.

And I just rewatched the Viking movie, and liked it a lot. It’s really _not_ a movie about Vikings — it’s about Vladimir the Great (10th century), although there are some Vikings in it.

I can’t speak to the historical accuracy of the events, or the verisimilitude of the costumes &c., but it was a pretty solid piece of historical epic/adventure fiction (although it maybe could’ve been 20-30 minutes shorter).

Looked through the IMDB reviews and my guess is that there’s some kind of Russian politics involved with which I’m completely unacquainted.

Oh, and here’s a trailer, just to give a sense of the film. I got my copy (possibly of dubious provenance) from Amazon.