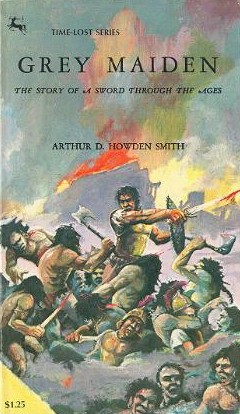 I have a habit of buying books — a compulsion, really. Older books, mostly, from book fairs and small used bookstores. Things that look unusual, and which, in the absence of an immediate reason on my part to read them immediately, often sit on my shelves for some time before I get around to them.

So I don’t remember now exactly when and where I picked up a collection of Arthur D. Howden Smith’s Grey Maiden stories, only that it was some time ago. I wish I knew now, because I’d like to go back for more, if there are any.

Arthur D. Howden Smith (1887-1945) was an early pulp writer; the collection Grey Maiden (Centaur Press, 1974) has four out of seven — or nine, depending on what reference you look at — of his stories about the Grey Maiden, the first sword ever forged from iron.

Each tale follows a different wielder, each in a different time and place, as the blade’s won and lost among battles and wars and the rise and fall of empires. All were originally published in the pulp magazine Adventure.

The four tales in the collection I have (there was at least one other collection, with more of them) include a story of betrayal and revenge among the soldiers of Alexander the Great, an account of a group of Phoenicians retreating across Italy, a story of the ebbing of Roman power in Britain, and an imagining of the first collision between the Byzantine Empire and the followers of Islam.

The stories are bleak, violent, and possessed of a dark energy that makes them utterly compelling. The history perhaps couldn’t always stand up to intense scrutiny, but is used in such a way as to make the most exciting and brutal tale possible. 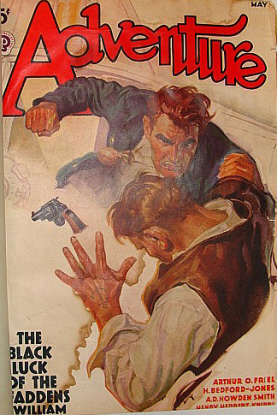 Tonally, then, the stories have a similar sensibility to some of Robert E. Howard’s fiction.

Firstly, there’s the sense of brooding doom, of things waning, of civilization declining; indeed, to judge by this collection, Smith’s stories tend to be more powerful the more they focus on the decay of empires, whether Carthage or Rome or Byzantium.

Like Howard, Smith conveys a sense of barbarism and violence as something fundamental in humanity, always waiting to emerge. Smith brings out the bleakness inherent in this vision by focussing on men (all of Smith’s protagonists in this collection, like the majority of Howard’s heroes, are male) who are competent agents of violence but who also believe in the civilization that produced them — they’re aware of what they’re losing by being a part of the increasing chaos.

More than this, there’s an aesthetic in the way the stuff of history is used that I find very similar. Call it ‘pulp history’; both writers focus on larger-than-life personalities, and the grandness, or at least resonance, of their situations.

While historians over the last century have tended to focus on relatively impersonal causes for events in history, and on re-creating the realities of daily life, and indeed have moved away from personalities to focus on annals and similar documents, Smith and Howard write out of a narrative tradition, like Scott or Sabatini, not afraid to simplify the play of cultures or civilizations to create a sense of sweeping significance. 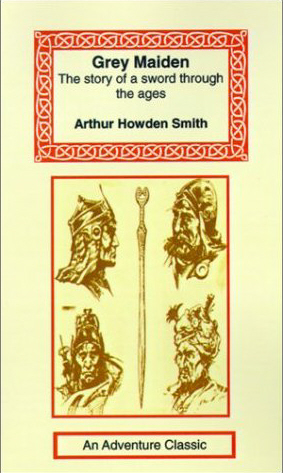 The complexities of a historical moment are squeezed out, but the point is (to switch the metaphor) that the reality of the moment is distilled down to its essence; the scene we’re looking at becomes a way of demonstrating that global history is slowly changing, taking the shape we understand, but doing so only in strife and pain.

There are significant differences between Howard and Smith, of course. Howard was much freer in his use of the fantastic; Smith hints that there’s something magical about the Grey Maiden, but never makes it explicit.

And Howard’s the more consistent writer, not so much story to story, but in maintaining a tone and pace within a story. Smith’s tales seem to take longer to get up to speed, and the build is not relentless so much as rhythmic.

Intriguingly, John Clute and John Grant’s indispensable Encyclopedia of Fantasy suggests Smith as a precursor to a different but equally significant writer, noting that

“Grey Maiden stands as a direct ancestor to such works as Jaan Kangilaski’s Seeking Sword sequence and as a relative of other stories featuring uncanny weapons — like Stormbringer in Michael Moorcock’s Elric series.”

The comparison to Moorcock is a good one; the wielder of the Grey Maiden is unbeatable in a sword-fight, but cursed to come to a bad end. But the shape of the stories, and the effect of the prose, is different than Moorcock’s often-ironic take on heroic tropes. 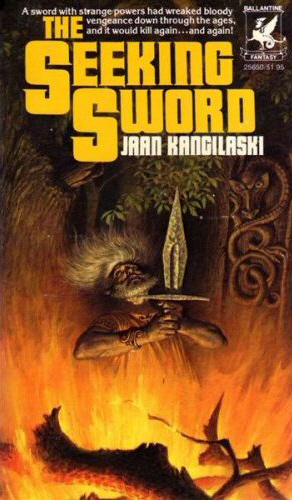 Ultimately, although the similarities are striking, these stories are intriguing enough that Smith’s work deserves to be considered in its own right.

I’d say that these are strong tales, that bring their settings to life and create memorable moments.

They tend to drag slightly as they build to their climaxes, but the characters hold your interest enough that you’re carried through. If not particularly deep, those characters are still real enough that you can believe that they care about abstractions—empire, civilization, honour.

Moreover, Smith writes dialogue that’s distinctly not modern but still credible, rich to the ear without being stilted.

Overall, these tales were tremendously promising. I can only hope that the current boom in reprinting lesser-known pulp works eventually pays off with a collection of the complete Grey Maiden stories.

You can read “The Forging,” the first Grey Maiden story, online here.

And Howard Andrew Jones, Black Gate‘s managing editor, discusses the Grey Maiden stories in his “Historical Swashbucklers From The Pulps” post at Sword and Sorcery.org here.

Cool! Grey Maiden is added to the must-find list!

I need to list for you guys sometime all the purchases i’ve made solely due to this blog. The Grey Maiden stories have just been added to my never ending list

[…] before (and Black Gate‘s Matthew David Surridge has written about one earlier collection here). Some of the stories are pulpy, some are dry, but at least half are top notch action pieces. The […]

[…] a last hurrah, I was pleasantly surprised to find The Grey Maiden by A.H. Smith, an almost Howardian collection of historic sword and sorcery tales (or perhaps just Sword tales) […]