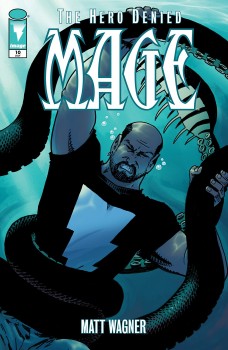 So I might have sold Isis short last issue.

For those of you who are new to the Mage series … honestly, this is a terrible place to jump on. We’re two thirds of the way through the final volume of the trilogy. Stop reading and go pick up Mage: The Hero Discovered. You’ll be a better person for it.

Anyway, during my critique of last issue, I was a bit harsh towards Isis, Magda’s sister. Basically, Kevin informed her that Magda had been kidnapped and that he needed someone to watch his daughter, Miranda, while he went to rescue her. At the time, not only doesn’t Isis offer to help Kevin rescue her sister, but she can’t even be bothered to watch Miranda, meaning that she’d rather have her niece face off against a pack of demons than take time from her spell transcription work to babysit.

However, in issue #10, we see that Kevin has stopped leaving Miranda in the car while he goes adventuring. Instead, he’s bringing her along to help him suss out magical threats. Sure, he’s still the one doing the fighting, but Miranda is definitely helping out. So I’m wondering if Isis deliberately turned Miranda away, knowing that she would be able to help Kevin. As we’ve seen in past volumes, Kevin isn’t always that good at teamwork. I guess when you’re nigh-invulnerable, you might see other people as little more than targets that need protecting. And we’ve already seen how much Kevin is surprised by his daughter’s resourcefulness, so there’s probably an issue of him not believing that she could help him. So Kevin would never choose to take his daughter with him on an adventure, but if he had no choice …

This issue opens with Magda trying and failing to contact help from outside her penthouse prison. Meanwhile, Hugo is staring into a bottomless pit that lies beyond the door to that prison. We’ve actually seen this same setup in the Styx Casino way back in Hero Discovered. But unlike Kevin, Hugo has no fear of heights, so he spends a lot more time staring into the abyss, eventually noticing that there are vague creatures flittering around in it.

Switching scenes, we find that Kevin and Miranda are exploring a cave by a beach. Curiously, Miranda tells her father that she doesn’t sense anything magical, despite the glowing piece of driftwood in his hand. Honestly, I’ve never been clear on what she means by “patterens,” but it apparently isn’t a shorthand word for magic in general. There’s a brief fight between Kevin and a sea monster (a “merrow”) that ends with him retrieving a magic coat that the creature used to assume human form, similar to the story of selkies shedding their seal skins to assume human form. Handing Miranda the coat, we see that it allows her to change her appearance to look like anything (including inanimate objects). This way, Miranda will be able to follow her father on his adventure, while also having the option of hiding in plain sight if things get too rough.

Meanwhile, Karol Gracklethorn is checking in on her mother, the Umbra Sprite, finding that she’s feeling much better, having resumed a more or less human form again. Again, Karol is more worried about Kevin Matchstick than any of her sisters and the Umbra Sprite confides in her that things are even worse for them than she suspected. While Karol is frantically trying to come up with a plan to prevent Kevin from finding them, the Umbra Sprite tells her that he must find them, that there must be a fight, and that “some will surely perish.” She then tells of a prophecy concerning three great powers: Kevin is one and the Fisher King is another. The third one is a mystery to her, although we’re clearly meant to infer that it’s the missing World Mage.

Elsewhere in the narrative, Magda has decided to summon one of the fairy folk that Hugo saw floating in the bottomless pit. With her cat dead, she needs a new familiar. Once a little goblin-thing shows up, she turns it into a purple winged cat and that’s the end of the issue.

The story’s picking up its pace as various players begin implementing their plans. Magda is taking steps to escape, Kevin is taking steps to find his wife and son, and the Umbra Sprite is taking steps to draw Kevin to her. So now we’re deep into fan theory territory, as all of the moving parts of the story seem unable to come together into one cohesive whole. But I have faith in Matt Wagner’s ability to pull it off.

So how do the pieces come together? It seems unlikely that both the World Mage AND the Fisher King will be suddenly introduced within the last five issues of the final series. So we are left to assume that they will be revealed as other characters whom we’ve already been following up until now. The Fisher King is supposed to be physically disabled in some way and that greatly limits candidates; really, none of the main characters have demonstrated any physical disability. As for the World Mage, he was quite straightforward about his identity in the first two volumes, so it would be somewhat against character for him to suddenly hide his identity from Kevin at this late date. Since the Fisher King, the Mage, and Kevin are supposed to come together, it would seem that the Umbra Sprite’s plan is to lure Kevin to her in the hopes that the other two will be similarly drawn.

One plot thread that I think will get further developed is the homeless shelter that the Gracklethorns established in order to search for the Fisher King. We’ve seen too many references to the shelter for it to turn out as nothing more than a dead end. Maybe the Mage has somehow infiltrated the shelter under some disguise. Since the Umbra Sprite has never personally visited the shelter (so far as we’ve seen), there’s no danger of her discovering him. Working at the shelter would allow the Mage to search for the Fisher King as well. In fact, the Gracklethorns’ failure to find the Fisher King might be the direct result of the Mage’s interference.

No further mention of Hugo eating fairy food or what exactly Magda’s Camelot pendant will do. But there are enough mysteries to easily fill another five issues of this series. I’ll keep you updated. And if you want another take on this series, be sure to check out the fantastic Hero Described podcast series.