Jennifer Roberson was one of the 80s class of DAW women writers. Her first short short story, “The Lady and the Tiger,” the genesis for the Tiger and Del series, appeared in Marion Zimmer Bradley’s groundbreaking Sword and Sorceress 2 in 1985. Like Mercedes Lackey, Mickey Zucker Reichert, Cheryl J. Franklin (whom I covered last week) and others, Roberson was a fixture on bookstores shelves and the DAW catalog all through the 80s and 90s. She launched several popular paperback series that ran for decades, and helped transform DAW into an industry powerhouse.

Her first novel was Shapechangers (1984), the opening book in the long-running, 8-volume Chronicles of the Cheysuli. In September 1986, with the first three novels in that series under her belt, she released Sword-Dancer, the first book in perhaps her most popular series, Tiger and Del, which follows the adventures of Tiger, a legendary warrior and sword-dancer, and Del, the sword-singer who hires him to rescue her brother, and who turns out to be as good with a blade as he is — something that vexes him greatly at first.

Tiger and Del ran to seven volumes (so far). The first six were collected in a handsome trio of omnibus trade paperbacks in 2006 with new covers by Todd Lockwood, making a nicely complete set on my bookshelf… until Roberson released a seventh book, Sword-Bound, in 2013. It’s tough being a collector sometimes.

As a series opener, Sword-Dancer is a little uneven, but still well worth reading. Here’s a snippet from one of my favorite Goodreads reviews by Dana. 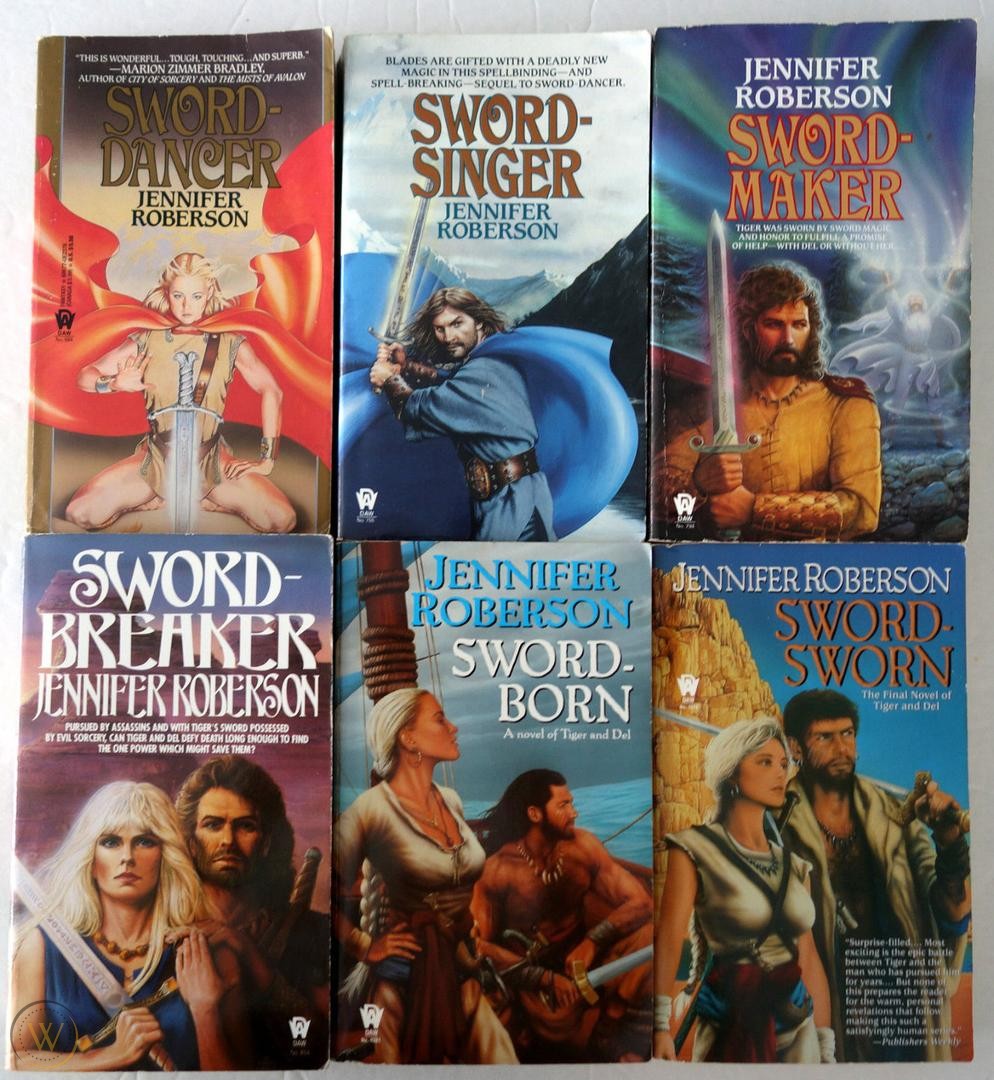 According to the S&S volume where they first appeared, MZB nearly threw Roberson’s short story across the room at the beginning, responding to Tiger’s apparent stereotypical barbarian-man behavior. By the end, though, she was forced to admit that it was an excellent counter-example of the type without actually being a parody. This book is an expanded version of that, telling the story of a strong and independent woman through the eyes of a man within a very traditionally male-dominated society. It works, and it explores some of the complexity of living in a traditional society… 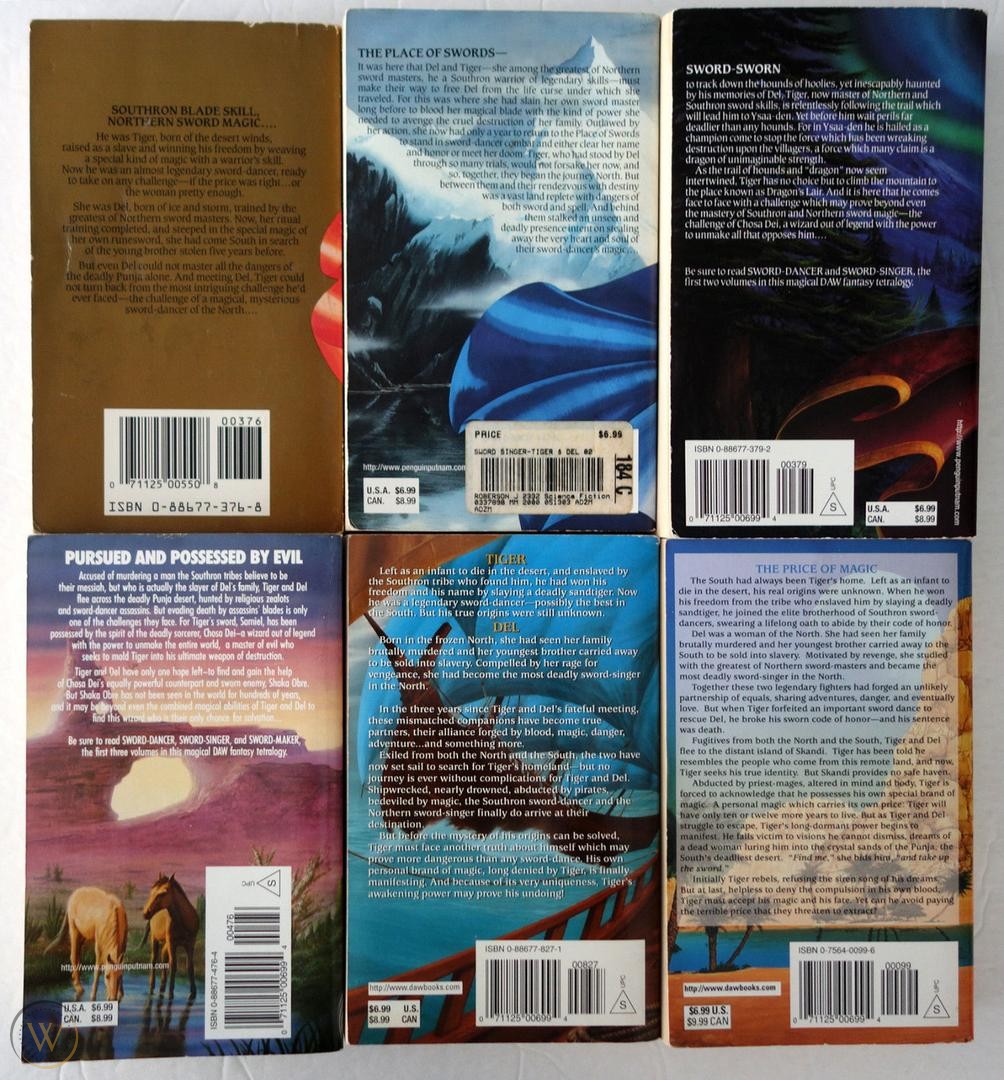 Back covers to the first six Tiger and Del novels

Thomas M. Wagner dives a little more deeply into the novel’s strengths and weaknesses in his SF Review article. The review has serious problems of its own (not the least of which is his off-hand comment that her overuse of made-up words bothered him enough that “I could’ve smacked her.” Note to male reviewers: the urge to smack around female writers for instructional purposes is not normal. At all.) so I’m not going to link to it here. But here’s an excerpt so you can see if it’s worth seeking out on your own.

Sword-Dancer is an admirable introduction to the six-volume adventures of Tiger and Del, one of fantasy’s more popular and appealing odd couples. The tale begins when Del, a dazzling blonde swordsmistress from the frozen north, tracks down the Sandtiger (Tiger for short), a smug, rascally rapscallion in the “young Clint Eastwood by way of a young Brando by way of every romance novel studmuffin ever written” mode, who plies his trade as a “sword-dancer” in the harsh Southron desert country… The story is narrated by Tiger, and though his rakishness is the stuff of cliché Roberson writes him with enough wit and self-awareness that objections are handily overcome. In particular, I admired how she made Tiger as likable as he is while keeping all of his macho cockiness and prurient interests intact…

What I found even more impressive was her characterization of Del. Again, I hate to focus on the gender issue here, but all too often I see female fantasists turning their heroines into exceedingly earnest, almost saintly archtypes of stalwart heroism… Del is a massive bundle of neuroses. She’s a true master with her blade — about which there is a provocative secret, by the way — and is frustrated by the way the men of the south, Tiger included, simply refuse to take her seriously… she’s a character who wins over your sympathies because her flaws are believable and all too human, and her love for the sibling she has lost is burning brightly beneath the cold and hard exterior.

Is there anything terribly original about Tiger and Del’s growing relationship? Not at first. Roberson handles the inevitable sexual tension so ham-fistedly it just doesn’t register as tension of any kind… But in the last hundred pages Roberson comes out swinging and delivers some dramatically powerful sequences with such aplomb you realize she’s deftly saved her best for last. And the finale is entirely satisfying. While I might have liked a bit more consistency throughout, a bottom-of-the-ninth comeback is always a glorious thing to behold. There’s no denying that by the end of Sword-Dancer, Roberson will have fantasy fans dancing in the streets.

Jennifer Roberson’s Chronicles of the Cheysuli. Covers by Yvonne Gilbert

The first four Tiger and Del novels were published as paperback originals; starting with Sword-Born they were released in hardcover first. All seven were published by DAW; the release dates were:

The first six were collected in three omnibus collections, all of which appeared in 2006.

All three omnibus volumes have covers by Todd Lockwood.

Sword-Dancer was published by DAW Books in September 1986. It is 286 pages, priced at $3.50 in paperback. The cover is by Kathy Wyatt.

On the one hand, I keep meaning to reread these books; on the other hand, I keep waiting because I’m hoping we’ll get an eighth volume one of these years.

Fantastic! Thanks for letting us know Jennifer.

You are most welcome! I’m excited to see it “in the flesh,” so to speak!

You and me both! I have it preordered so it’ll magically appear on my Kindle.

It would be fascinating to read an essay on why these post-1977 doorstops were so popular, whilst clearly lacking on all levels: originality, pacing, style. The publishers published them because they sold. Why did they sell?

> I keep waiting because I’m hoping we’ll get an eighth volume one of these years.

That way lies madness. If the eighth volume arrives, do you hold off reading because you’re hoping for a ninth? You’ve gotta commit at some point.

> whilst clearly lacking on all levels: originality, pacing, style… Why did they sell?

I’m no expert on DAW fantasy, or this series in particular, but I challenge your assertion that these books were “lacking on all levels.” They’re pretty clearly episodic character-based adventure with a strong thread of romance, and that formula has been hugely successful for a hundred years — just look at Castle and Moonlighting.

Maybe they don’t appeal to you, but that does’t mean these books have no value.

You include covers of the Cheysuli books in omnibus form, but I don’t see the discussion thereof. Those are the ones by this author I liked, quite a bit, though I didn’t manage to finish the whole series because of that old devil too many other books. I still intend to go back to them one day. I probably won’t ever get to the Tiger and Del books.

Thanks. I must admit that I was reflecting back what has seemed pretty apparent from Black Gate essays down the years, rather than offering a personal critique. I think your analysis is convincing, but there does seem to be something specific going on from the late 1970s.

I haven’t read these particular books either, but the pleasures of unadorned formula fiction are pretty straightforward – given familiarity with the genre and writer, you know you’ll like what you get going in, and the formula does most of the work that more demanding writing requires of the reader, so you can tear through them fast.

That’s not necessarily a criticism, especially coming from someone who has just finished working his way through the first season of Charlie’s Angels.

> You include covers of the Cheysuli books in omnibus form, but I don’t see the discussion thereof. Those are the ones by this author I liked…

I mentioned the Chronicles of the Cheysul briefly in the second paragraph. I discussed them a bit more in a big piece I did on DAW omnibus volumes last year:

> there does seem to be something specific going on from the late 1970s.

You ask an interesting question, one I don’t think I’m up to answering in the Comments section.

My short answer is that, as American SF and fantasy were moving beyond the core audience that first made them popular in 1930-70 (adolescent men), they matured and generalized. Meaning they became less fascinated with the things that made them a niche market (science and adventure), and began to attract the kinds of writers who cared less about those things, and more about characters.

It was those writers who broadened the genre and made it truly appealing to adult readers for the first time. They simultaneously alienated a lot of readers who felt this new kind of fiction lacked the sense of wonder and originality that first brought them to the genre.

That’s a huge generalization of course. But that’s my take.

> the pleasures of unadorned formula fiction are pretty straightforward – given familiarity with
> the genre and writer, you know you’ll like what you get going in, and the formula does most
> of the work that more demanding writing requires of the reader, so you can tear through them fast.

As usual, your take is more astute and on-point than mine. Well said, sir.

I agree completely…. especially with your unabashed love of formula fiction!

>That way lies madness. If the eighth volume arrives, do you hold off reading because you’re hoping for a ninth? You’ve gotta commit at some point.

John — Normally, I’m inclined to agree; if a series interests me, I’ll start reading (or at least buying) it as it becomes available, not least because if we don’t buy book 1, then we may never GET book 2. In this particular case, though, I’ve already read all 7 books so it’d be a reread, and Jennifer Roberson has mentioned on FB that the eighth (and, I believe, final book) is somewhere in her queue, so I’m more comfortable waiting.

Ah — that makes more sense. I’ll keep an eye out for Book 8 for you!