I don’t know, man. It seemed like something that could not possibly fail. A brilliantly weird memoir-novel by one of America’s great writers, a timely subject, the team of writer-producers who created The Wire (one of television’s greatest shows), a gifted cast, high production values, a network known for sponsoring bold and innovative work. And yet…

No, this isn’t about the only-in-my-dreams TV adaptation of The Wolf Age. It’s the ongoing HBO adaptation of Philip Roth’s The Plot Against America that’s making me sad.

I’m not here to tell you that it’s a disaster, because it’s not. In every episode so far (see here for my assessment of episode 1, and here for my wise words on episode 2) there has been great stuff. One example: young Philip’s nightmare at the beginning of this week’s episode when all the faces on his precious stamps turn into Hitler. It’s horrible — the thing that must not happen, and yet seems to be happening no matter what anyone does to stop it. In a few seconds, without a word spoken, it expresses what the show (not to mention its source-novel) is about. 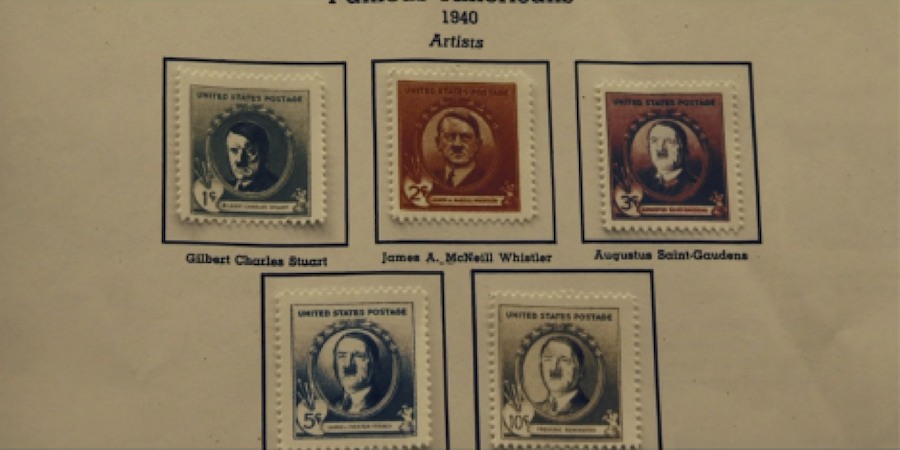 Don’t lick these stamps. And don’t let them lick you.

But the show is less than its disparate parts so far and (as of episode 3) it’s already half over. It’s not so much a matter of “What went wrong?” as “What’s not going right?”

Sometimes I think it’s the casting. Morgan Spector plays Herman, young Philip’s father, with such forceful confidence that sometimes it’s hard to believe that anything is really going bad. That’s the wrong signal for this story; it reduces the impact of the threat.

But he’s a fine actor, and one of the highlights of episode 3 was due to his performance. The Levin family takes a long-planned vacation to Washington DC, but it’s President Lindbergh’s Isolationist Washington and the vacation becomes tinged with nightmare. The tag “loudmouth Jew” follows Herman and the Levins around like Joe Btfsplk’s cloud. (Joe Btfsplk was a character from Al Capp’s comic strip “Li’l Abner” who, well, was always followed around by a cloud. I’m starting to feel like this reference is more trouble than it’s worth, except that I think more people should know about this guy. We’re all Joe Btfsplk these days.) 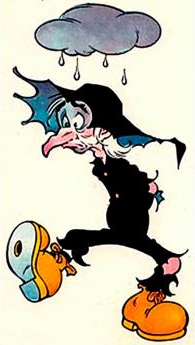 Herman is, in fact, not shy about stating his opinions and insisting on his rights, to a degree that everyone else around him finds, in varying degrees, infuriating, embarrassing, or terrifying. In contrast, Bess Levin (the always-great Zoe Kazan) is increasingly frightened by the anti-Semitic malice that Lindberghers are increasingly comfortable with expressing. The Levins get kicked out of their hotel; Herman gets in confrontations with anti-Semites at the Lincoln Memorial and a Washington restaurant. As Herman becomes more strident, Bess becomes more distressed. The tension between them is resolved, strangely, as Herman serenades her, their Washington tour guide (an understated but eloquent turn by Michael Cerveris), and an entire restaurant with an a capella rendition of “On the Banks of the Wabash, Far Away”.

He won’t be unseen or unheard. He insists on his right to be Jewish and American, no matter who thinks they don’t go together. It’s a bold, touching performance.

There’s some other great stuff in this episode, too, as the role of Rabbi Bengelsdorf (John Turturro) in the Lindbergh administration becomes clearer. He’s working in something called “the Office of American Absorption” and his first project is a pleasantly named program called “Just Folks” where young (Jewish) Americans can leave the squalid streets of Eastern cities and spend a summer with a (“real”) American family. The specific and stated purpose: to promote assimilation. Our own Sandy Levin (Caleb Malis), Philip’s older brother and underground fan of Lucky Lindy, gets recruited for this program by his aunt Evelyn (Winona Ryder), now acting as Bengelsdorf’s assistant, fiancée, and shill. 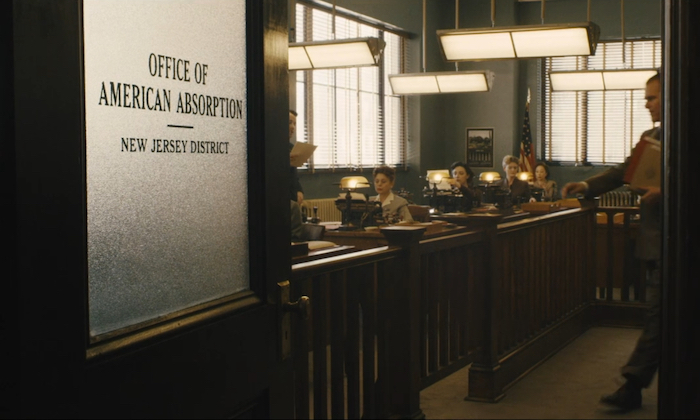 “Office of American Absorption. Are you interested in cultural genocide, or the other kind?”

“If all this stuff is so great then what in the name of the Great Walrus are you complaining about, Enge (if that is your real name)?”

I’m complaining, I guess, about the half of the episode that doesn’t focus on the quartet of Levins at the heart of the story. The story splits in two with this episode, following the Levins at home, and cousin Alvin abroad as he enlists in the Canadian army and goes to fight Nazis.

These Alvin scenes are not in the book. In Roth’s novel, Alvin goes to war; Alvin returns from war; we get no first person accounts of his war experiences until he tells some of them (and not these ones) later on.

A novel being adapted for the screen is not some sacred text that cannot be altered in any way; I get that. Books must be altered for screen adaptations. But… 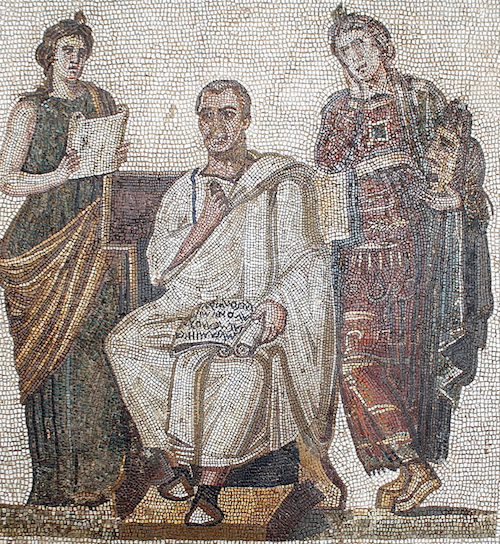 There’s this story about the poet Vergil. People were always making fun of him for stealing stuff from Homer. (When I say “always”, I mean it: someone was doing this on Twitter just the other day. Classics Twitter can be rough sometimes, but down these mean streets a man must go, etc.) Anyway, Vergil wouldn’t get mad. He’d say, “You think it’s so easy? You try it. It’s easier to steal Hercules’ club than a line of Homer.”

Vergil’s point, which I am preparing to steal from him, is: if you’re going to imitate Homer you sure-as-hell have to bring it. Likewise Roth. If you’re going to develop the backstory of a Roth character, you’d better deliver some words that can stand comparison to Roth’s. Ed Burns, the scenarist, doesn’t really do that here. 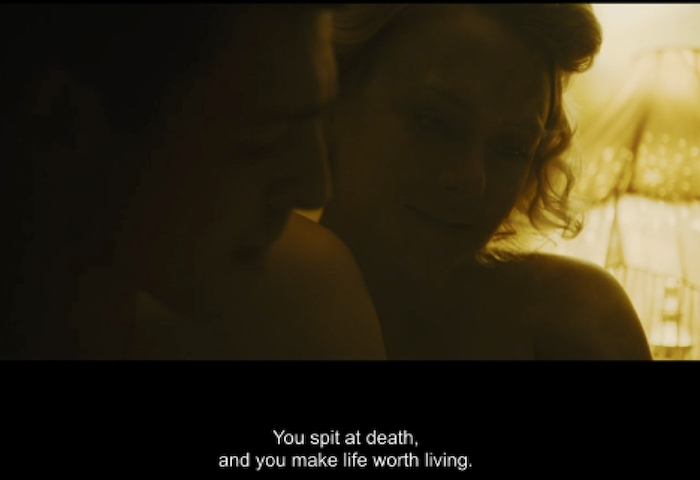 “The cheaper the crook, the gaudier the patter”

The scenes with Alvin roistering around Britain during the Blitz were kind of embarrassing. There was this scene with Alvin and a British woman screwin

g and talking philosophy. It lacked impact. It’s as if someone said, “Hey what are these characters about?” and someone else said, “I know! We’ll just put it into their dialogue!” There was a scene with a couple of soldiers and a couple of girls in a pub in London before the soldiers go bravely off to war. I’ve seen that scene before, in 97% of the movies made about WWII. If we’re going to see it again, there should be some reason for it, but there isn’t. Alvin’s braggadocio in training is tedious viewing also. He’s selected with another private for an important intelligence operation. (I guess they were all out of commissioned officers, or non-commissioned officers, or PFCs, or people who’d been in the army more than a couple of months.) Then he mouths off to the guy briefing him for the job: “I signed on to kill Krauts, not to rummage around machine parts.” He talks like an internet badass. The contrast is painful between this writing and Roth’s (who doesn’t minimize Alvin’s heroism and sacrifice, but isn’t interested in this kind of warrior machismo — and would write it better if he were). 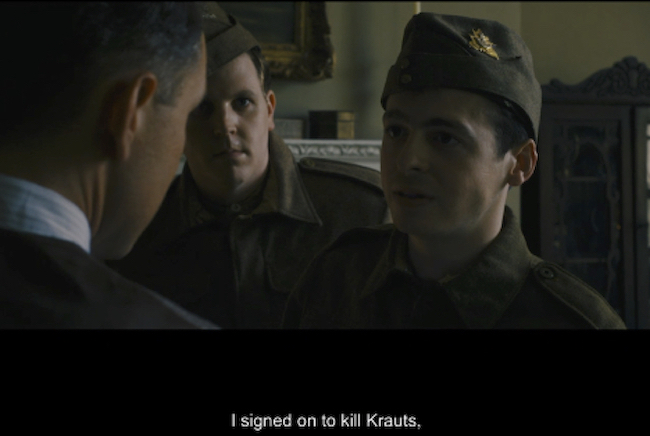 Okay, but you may also have to peel some potatoes

The Alvin scenes have a kind of payoff which I won’t spoil for you here, but the investment in screentime that his story receives doesn’t really add up to greater impact. Those scenes are so conventional in WWII movies that, even if they were well done, they’d diminish the force and the weirdness of the real story here. This is about Lindbergh’s America, not Britain’s finest hour.

In summary: I’m still watching, but I’m not as sanguine about the series as I have been. Your mileage may vary, as they used to say in the good old days of the O.P.A. 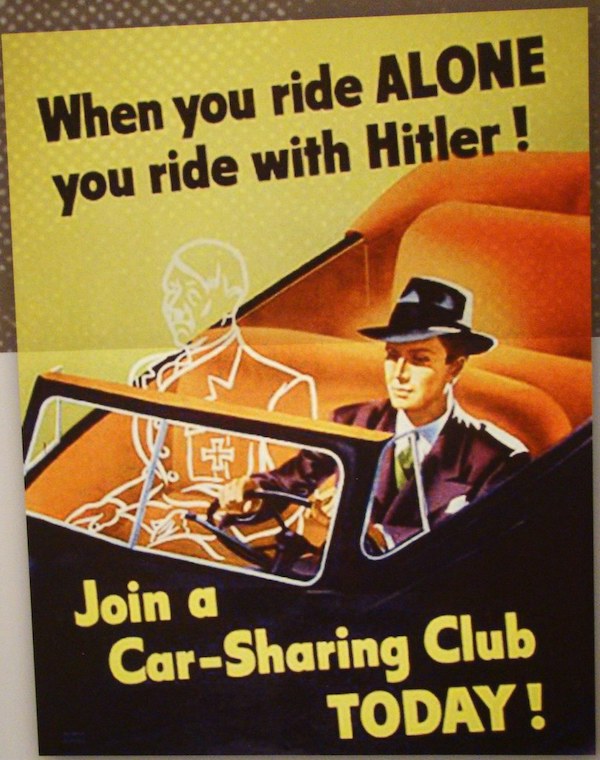 An OPA poster from WWII about car-pooling, as if there weren’t already too many pictures of Hitler in this review.

Did you miss the earlier installments?