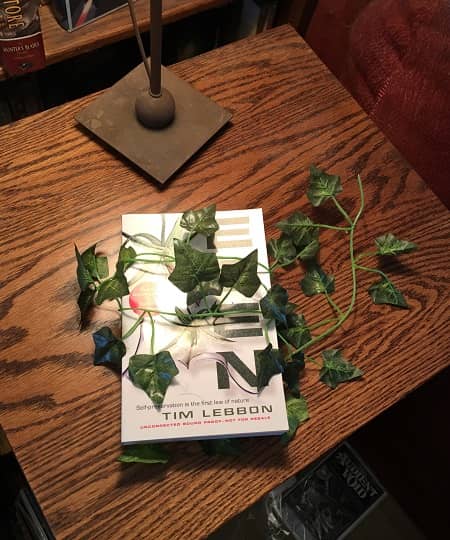 The ivy-cover copy of Tim Lebbon’s Eden,
mailed to me by a creative publicist at Titan Books

Getting review copies never gets old. I get far too many to write about these days, and they pile up on my library floor. When it comes time to crank out a Future Treasures post about an upcoming title, I take the time to select what looks most interesting, or the one I think you lot would most like to hear about.

Unless I’m in a hurry, in which case I grab whatever catches my eye. Then you’re at the mercy of whatever publicist or cover designer is most clever this week, and able to cut through all the clutter and grab my attention.

Today there are more than three dozen review copies and advance proofs piled up in front of my big green chair, but I’m not writing about any of them. Today you’re hearing about Tim Lebbon’s new eco-thriller Eden. Not because Kirkus Reviews calls it “Jurassic Park meets catastrophic climate change in this creepy, cinema-ready story,” or because Publishers Weekly says it’s “wondrous and deeply unsettling.” No, I’m telling you about Eden because a very clever publicist took the time to wrap a copy in plastic ivy before mailing it to me, and it’s that little bit of extra effort that gets attention. (Plus, what the hell are you going to do with an ivy-wrapped book? You can’t just stick it in the pile; the ivy will get crushed.)

It reminds me of the time the Tor publicity team sent me K Arsenault Rivera’s The Tiger’s Daughter with a seed packet that doubled as a bookmark (complete with planting instructions). You better believe I wrote about that one. 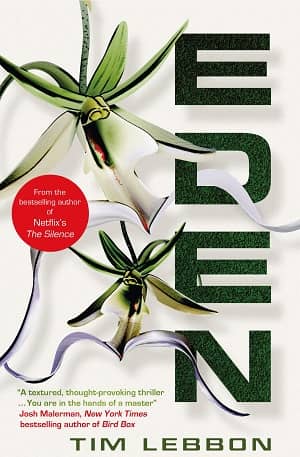 Anyway, on to Eden, which actually looks pretty interesting once you clear all the foliage away. Here’s that Kirkus review I mentioned.

Nature personified seeks revenge for climate degradation in this dystopian thriller by Lebbon (The Silence, 2015, etc.).

Jenn, her father, Dylan, and her boyfriend, Aaron, team up with sportsman Cove, Selina, a scientist, Lucy, a Ph.D. student, and Gee, a former Canadian policeman who became an electrician after he lost his husband and hand in a car accident. The team’s goal is to become the first to run across Eden, the oldest and wildest of the Earth’s 13 Virgin Zones, which were fenced off and allowed to return to a state of unpeopled nature after the planet’s rivers were polluted and its rainforests devastated… The illegal adventure race across the 300-mile stretch of forests, valleys, cliffs, ravines, rivers, and mountains quickly sours as Jenn is injured, the forest seems to be watching them, and Kat’s team members turn up dead and amalgamated into the natural environment… Jurassic Park meets catastrophic climate change in this creepy, cinema-ready story.

See all our recent coverage of the best upcoming SF, fantasy and horror here.