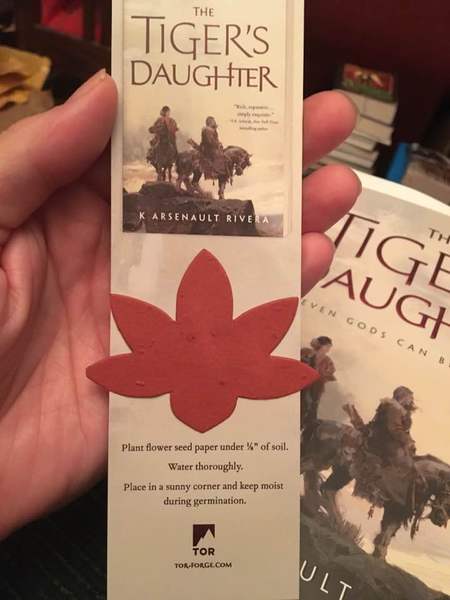 Check out the cool bookmark that came with my review copy of The Tiger’s Daughter, the debut novel by K Arsenault Rivera!

It’s instructing me to “Plant flower seed paper under 1/8″ of soil. Water thoroughly.” Okay, but…. what does it GROW? A geranium? Violets? An alien seed pod like that horrifying episode of Johnny Sokko?

I guess there’s only one way to find out. And it involves sticking this super-cool book collectible in a bunch of dirt. Marketing departments, man. They thrive on cruelty.

Anyway, The Tiger’s Daughter looks pretty darn nifty. It’s 526 pages, which is massive for a debut fantasy novel. You know there was an editor at Tor who thought long and hard before she lifted this 10-pound manuscript out of the slush pile and onto her desk.

Here’s the front and back cover (click to embiggen.)

I don’t know anything about K Arsenault Rivera at all. Her author bio says she’s from Puerto Rico. Maybe the seed is a cool Puerto Rican flower? Or a chironja? Why do I torture myself like this.

Apparently this is the first novel in an ambitious new series titled Their Bright Ascendency. (Where do debut writers get the time to write this much? And seriously, would it kill them to share the secret with George R.R. Martin?) Book 2, The Phoenix Empress, arrives from Tor on July 24, 2018. 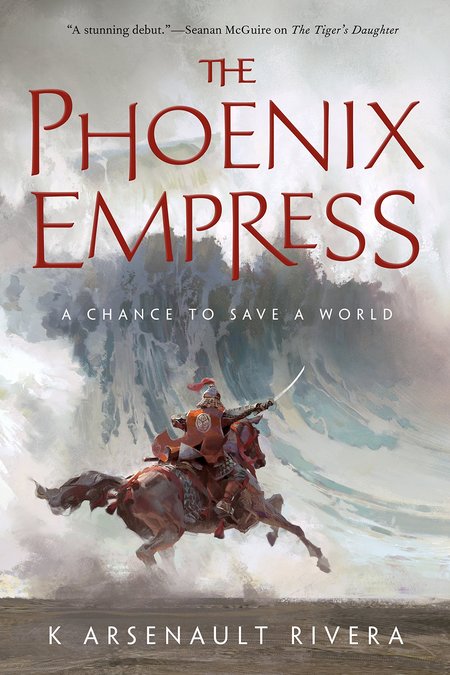 Here’s the description for the second book. Read it at your own risk. There are probably spoilers for the first book.

Since she was a child, the divine empress O Shizuka has believed she was an untouchable god. When her uncle, ruler of the Hokkaran Empire, sends her on a suicide mission as a leader of the Imperial Army, the horrors of war cause her to question everything she knows.

Thousands of miles away, the exiled and cursed warrior Barsalyya Shefali undergoes trials the most superstitious would not believe in order to return to Hokkaran court and claim her rightful place next to O Shizuka.

As the distance between disgraced empress and blighted warrior narrows, a familiar demonic force grows closer to the heart of the empire. Will the two fallen warriors be able to protect their home?

The Tiger’s Daughter will be published by Tor Books on October 3, 2017. It is 526 pages, priced at $15.99 in trade paperback and $9.99 for the digital edition. The cover is by Jamie Jones. Read the complete first chapter at Tor.com.