Among the many challenges I had when I sat down to write Flame and Crimson: A History of Sword-and-Sorcery was the problem of genre itself.

Many of the genres we know, and love, and live in — mystery, horror, historical fiction — are old, in a relative sense, culturally ubiquitous, and therefore intensely familiar. We’ve enjoyed them for so long that we typically don’t bother to question who set them down, or when, or why. Their conventions are widely accepted. Everyone knows what fantasy is for example, and can conjure up a reasonably accurate description without expending too much effort — elves, dragons, heroes, princesses, magic, set in other worlds beyond our own. Boom, done.

But if you start poking under the hood you will find that genres are full of contradictions, exceptions, uncertain beginnings, and open-ended futures. They don’t coalesce until after art has been created, often decades later. They’re birthed through a weird alchemical process that includes inspired initial breakthroughs, the production of further works by successive artists, derivative and pastiche work, fan/reader discussion, and eventually, critical consensus. Or something close. 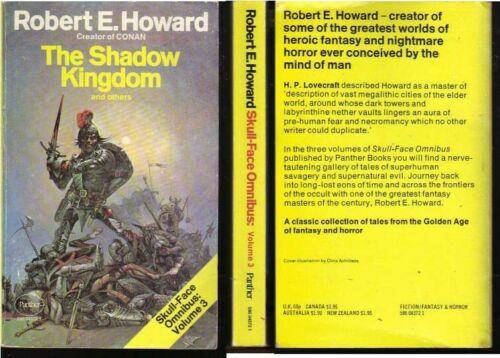 Sword-and-sorcery marinated for some 30-odd years before it was given a name. Robert E. Howard did not consciously create a new genre with “The Shadow Kingdom” (1929), nor did his peers or the writers working in his immediate wake. Sword-and-sorcery was an amorphous “thing” slowly taking shape in the pages of Weird Tales, when the likes of Clark Ashton Smith, C.L. Moore, Henry Kutter, and Clifford Ball started writing additional stories of protagonists battling wizards and monsters. In the case of Ball and Kuttner these authors hewed rather closely to the heroic template established by Howard, but Moore and in particular Smith set down rather divergent strains.

It took much discussion decades later in the pages of the likes of Ancalagon and Amra to get the nomenclature nailed down. Fan letters and editorials offered many suggestions. “Epic fantasy,” “worlds of adventure” and the rather clunky “nonhistoric adventure-fantasy” were bandied about. Fritz Leiber finally coined “sword-and-sorcery” in 1961 while engaged in a back-and-forth with Michael Moorcock, who demanded that Fritz come up with a name for the type of fiction both were writing. “Sword-and-sorcery” was alliterative, did the job, and stuck. And here we are.

But as it turned out that was just the beginning. Genres morph over time as authors innovate, pushing borders in new directions and sometimes knocking reader expectations flat (imagine being a mid-20th century historian of the spy genre, believing you had every angle covered, only to have “Casino Royale” published). And they get redefined with the benefit of hindsight and further analysis.

In the almost 50 years since Leiber put on a tag on it, new works of sword-and-sorcery have been written that challenge its old frameworks. Jessica Amanda Salmonsen’s Heroic Visions (1983) offered S&S new models of strength, beyond the mere physical. Michael Chabon, an author of literary fiction, entered the S&S fray with Gentlemen of the Road (2007), a story that contains no magic whatsoever and dials up the historical elements. Heck, S&S was changing even as Leiber coined it. Moorcock had just served up Elric, a “hero” requiring a regular dose of drugs and very comfortable using demon-summoning magic, anathema to Conan. Yet most now consider the Elric stories canonical sword-and-sorcery.

Genres run the risk of becoming too proscriptive and narrow. If you freeze a genre in time, and declare for example that nothing after 1982 constitutes sword-and-sorcery, then it is a dead thing, possibly worthy of study or academic curiosity, but not alive in any meaningful sense. As a fan of Tales from the Magician’s Skull I don’t want to see this happen. I’m glad new stories like Howard Andrew Jones’ The Desert of Souls are still being written — homages to the glorious past of S&S, but also updated and new. Genres should have enough flexibility in their definition to permit innovation. Authors who work in a paint-by-numbers manner, fully conscious of the genre in which they are working while rigidly adhering to the rules of engagement, are unlikely to produce art of lasting value (although they may produce something relatively entertaining — I’ve read a lot of this stuff, and enjoy some of it). This phenomenon happened to sword-and-sorcery in the 70s and 80s, and I believe a glut of derivative and pastiche works is partially to blame for the subgenre’s downfall. Shorn of any fringe cases and too rigidly conservative, we are left with Conan and Brak and Thongor. And parody.

Genres are by their nature inherently subjective, particularly when you examine the fringe cases. Sword-and-sorcery certainly has some uncertain, fuzzy edges. How do you classify The Broken Sword (Sword-and-sorcery? Heroic fantasy? High fantasy? Viking fantasy?) Is Clark Ashton Smith really a sword-and-sorcery author, and are “The Dark Eidolon” or “A Rendezvous in Averoigne” S&S, horror, or dark fantasy (or all three at once)? A story like Stormbringer introduces world-shaking events that don’t seem to fit the gritty street-level/mercenary view we typically associate with the subgenre. Is it sword-and-sorcery?

Maybe, and maybe not.

But it also is true that genres need some amount of parameters and structure, and working definitions, else they become meaningless (please don’t call The Wheel of Time, The Chronicles of Narnia, or Harry Potter sword-and-sorcery, or I will fight you). Historical fiction is particularly unbending. Bernard Cornwell can’t just drop a Greek Hoplite into the middle of his Saxon Stories, for example, or it becomes alternative history. Or maybe science fiction.

So why bother with genres at all? It’s a fair question, and one I’ve asked myself from time to time. I would say that they make for great sign posts (“hey, you liked A Song of Ice and Fire? Have you tried The First Law trilogy? It’s pretty grimdark.”) And paradoxically they are capable of engendering creative breakthroughs, as authors and artists take well-trodden tropes and audience expectations and create something new from them. Think of what Sergio Leone, Ennio Morricone, and Clint Eastwood did with the western in the 1960s. A Fistful of Dollars took a genre that had been defined by a romantic “black hats vs. white hats” portrayal of the old west, and introduced a new level of grit and violence and realism. And in so doing created what would eventually be known as the spaghetti western.

This is of course what Howard did with sword-and-sorcery — a little from horror and Lovecraft here, a smattering of historical adventure and Harold Lamb there, seasoned with influences from Celtic and Norse myths — and created something vibrant and new. Perhaps there is nothing new under the sun, but talented authors can take old pieces and remake them into new structures. And we have genres to thank for it.

We now have the advantage of 90+ years of history to help us get our arms around sword-and-sorcery, this subgenre we know so well (or at least, we think we all know well). But we’d do well to remember that what “sword-and-sorcery” was, was not so obvious in 1932, or 1961, or 1989. Undoubtedly it will continue to evolve.

Brian Murphy is the author of Flame and Crimson: A History of Sword-and-Sorcery (Pulp Hero Press). His last article for us was a review of the Literary Wonder & Adventure Podcast. Learn more about his work on his website, The Silver Key.

I’m reading FLAME & CRIMSON now and loving it! I hope you’re working on a sequel!

Does anyone know if the original Moorcock article about naming Howardian fantasy stories and Leiber’s response letter to it are still around somewhere?
I’ve been trying to hunt them down for years, but you always only find the one sentence that is quoted on wikipedia.
I’d really like to know how the whole conversation went and what exactly Leiber was replying to.

KellyG: Thank you! That means a lot. I don’t have immediate plans for a sequel, but I hope to see more sword-and-sorcery scholarship from others. And I’m certain this won’t be my last book.

Martin: The Leiber/Moorcock exchange was in an old fanzine called Ancalagon, and was expanded on a bit in Amra. I’ll see if I can dig up those references.

Apparently it goes back to Moorcock’s article “Putting a Tag on It” in Amra Issue 15.

We know that Leiber’s answer was Sword & Sorcery, but I really would want to know what the actual question was he replied to.

Issue 16 had three letters under the heading “On What We Should Call the Kind of Story This Magazine Is”. One of which is by Leiber and probably also really insightful on the whole subject.

Hi Martin, the question is posed in a lengthy letter by Moorcock in Vol 2., No. 15. Here are some relevant excerpts:

So, all in all, I would say that Epic Fantasy is about the best name for the sub-genre, considering its general form and roots. Obviously, Epic Fantasy includes the Conan, Kull, and Bran Mak Morn stories of R E Howard; the Grey Mouser/Fafhrd stories by Fritz Leiber; the Arthurian tetralogy by T H White; the Middle Earth stories of J R R Tolkien; “The Worm Ouroboros” by E R Eddison; the Zothique stories of Clark Ashton Smith; some of the works of Abraham Merritt (“The Ship of Ishtar”, etc.); some of H Rider Haggard’s stories (“Alan and the Ice Gods”, etc.); “The Broken Sword” by Poul Anderson; the Gormenghast trilogy of Mervyn Peake (it just gets in, I think); the Poictesme stories of James Branch Cabell (including “Jurgen”, ‘Silver Stallion”, and others)j and “The Well of the Unicorn” by Fletcher Pratt.

I would appreciate other suggestions for possible inclusions. “Titus Groan” and its sequels by Mervyn Peake actually do not have the form nor roots I have described but they have the general atmosphere and are certainly set outside of our own space-time Earth.

Moorcock ends this long missive with the question: “What do you think?” He’s asking whether “epic fantasy” is the optimal term for the type of fantasy we generally regard today as S&S. Leiber, in response, suggested “sword-and-sorcery” and the latter stuck.

Now this is REALLY fascinating. Moorcock includes Tolkien within the sphere that he wants to name. My understanding has always been that the term Sword & Sorcery was created specifically to differentiate Howard and Tolkien and their respective traditions.
This really overturns my whole understanding about the evolution of S&S as a concept.

I’m actually speechless. I didn’t expect such a bomb when trying to figure out what Moorcock and Leiber were thinking what Sword & Sorcery is.

Great stuff, and an interesting problem.

I still think the best definition of S&S is Joseph McCullough’s: “Fantasy with dirt.”

Great post and discussion! One of the most interesting comment section ever, actually. I love it when die-hards dig through the archives. Sharing this in the S&S Goodreads group. https://www.goodreads.com/topic/show/21260181-what-is-s-s

[…] to even conceptualise Sword & Sorcery as a still-living genre. As Brian Murphy highlighted in an article for Black Gate last year, genres are malleable and often defined in hindsight. But, is it right […]